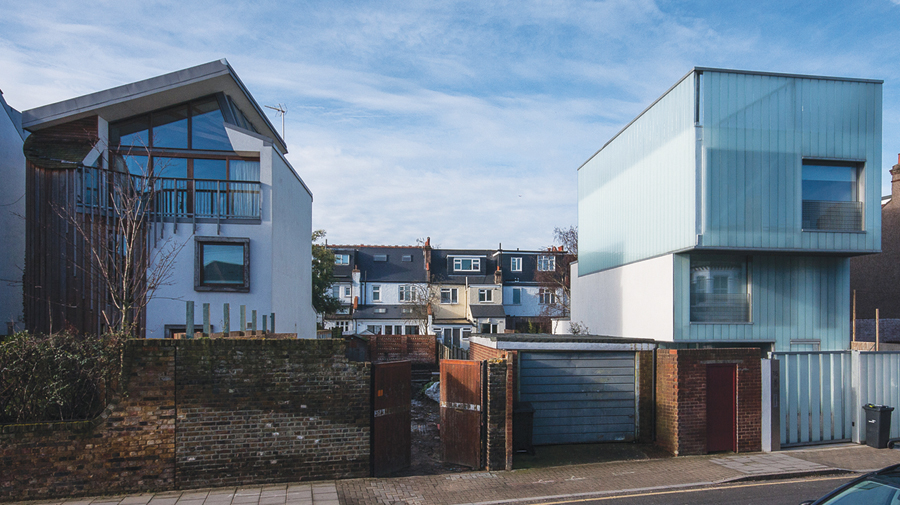 Each issue we follow Will Anderson as his self-build journey unfolds. This month we look at how far he has come a year into building his eco-efficient home.

We first met Will back in February 2014, when after years of dreaming, planning and researching, his Arts and Crafts inspired self-build was finally about to become a reality. The plot that was to home his vision was a six metre wide slice of South London, neatly positioned between two existing self-builds – one a genuinely ‘zero-carbon’ structure and the other an uber-minimalist design. Both striking and architecturally distinctive, Will’s challenge was to create a building that emerges as a masterpiece within its own right.

Not only will Will’s finished home pay homage to the English Arts and Crafts movement, it will also boast exceptional eco-credentials, paying close attention to the key concerns of ecological design. The house will be called The Orchard as it will also provide a horticultural ecosystem to feed its inhabitants all year round.

By April the project start date had been knocked back due to Community Infrastructure Levy ammendments. Before the changes Will would have paid £3300 as soon as work started, so it was worth waiting for the exemption for self-builders to be approved. Having trained in furniture craft, Will used this time to employ his new skills in creating his own kitchen cabinets, doors and drawers.

Work finally started in May. Reinforced piling was drilled into the site and a 1500 litre rainwater tank was lowered into the ground. Another deep, broad hole was dug for the slab and subfloor of the house. Rain filled the hole with water, the digger’s bucket got clogged and the dumper started to sink into the mud. But peace was restored when they got a bigger digger in.

Will opted for a timber frame because of its environmental credentials. In July the structure arrived on the back of a big green lorry, each piece marked up, labelled and cut to size. The hot summer weather allowed the walls to go up with ease, meaning that Will could finally see his project move from two to three dimensions. The frame was complete by the end of August, which was perfectly timed as he had booked the windows and doors to be installed in September.

The doors and windows fitted into the frame with no complications, so the next task was to form the roof. The basic design of the roof is a ‘warm deck’ – a thick layer of insulation laid on top of rafters that is finished off with a continuous weather-proof membrane. Solar panels were then installed and heat-recovery ventilation cowls were added to the roof to breathe fresh air into the new structure – further renewable advantages. The next job was to line the frame with high-performance insulation to aid The Orchard in becoming an exceptional low energy house.

A key concern for a low energy build is to ensure the final structure is airtight. Will specified this timber frame because they have a track record of achieving very high levels of airtightness. High quality windows and doors were also essential, so triple glazing was specified. Wrapping and joining the damp-proof membrane and adding a layer of thick insulation completed a fully sealed property.

By the end of September the structure was airtight, however it was more akin to a gigantic cardboard box than a home. Because the Arts and Crafts movement was the core inspiration for The Orchard, the obvious choice for the exterior finish was brick. Will chose Silver Grey bricks – a red-orange brick dusted with a fine grey sand – because he knew the delicate colour combination would look fabulous when applied at scale. When the bricks turned up, the small site was completely overwhelmed as the thousands of bricks were piled high through the house into the back garden. Lime mortar was used to glue the bricks together – a material far less likely to crack than cement.

Now that The Orchard finally resembled a home, it was time to approach solving the cabling and piping puzzle – a hurdle that every self-builder comes up against. Will thread all the ducts, wires and pipes through the timber frame’s I-beam studs, having to navigate which routes to take through the building without one thing getting in the way of another. Having come up against rogue plumbers in the past, he also took the time to install the toilets, pipes and soil stack himself. Will likened piecing all these small parts together to a game of Mousetrap – a slow and laborious task. One positive in this process was that, because the building will be so energy efficient, minimal heating is needed – so much so that no central heating will be installed as the home will run perfectly with the help of only a few small electric radiators, eliminating the need for a boiler or heating pipes.

In February this year a pressure test was conducted. The test highlighted one major cold spot in the structure through which air was gushing into the building. Thankfully, this was easy to fix and the final test produced a great result – ten times better than Building Regulations – but not quite at the Passivhaus standard that Will was aiming for. However, the airtightness of the building will improve once the walls are boarded up and plastered.

More in this category: « The pressure is on Saving energy and making it »
Login to post comments
back to top