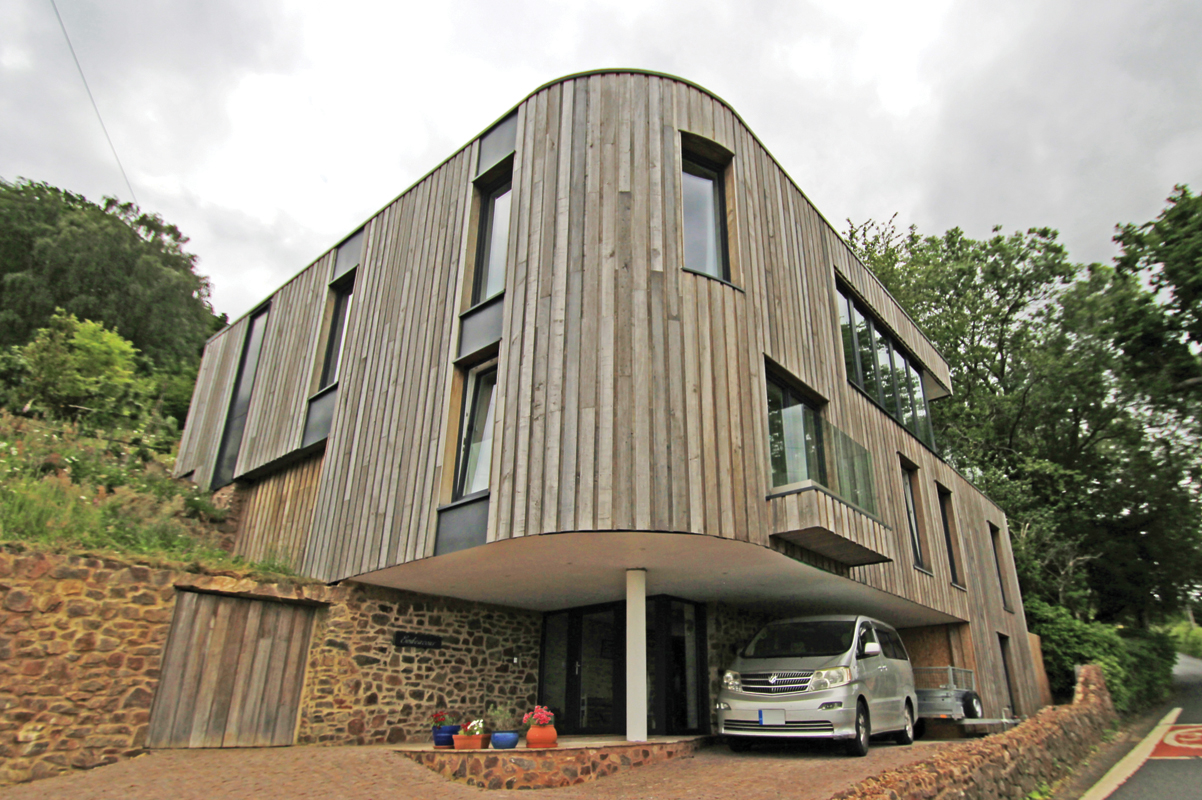 When Worcester-based Architect Nick Carroll was approached to design a Passivhaus-inspired home that would be built on the very cliff face of the Malvern Hills, he knew it would be a once in a lifetime project for its owner Jonathan Flewers and his family. What’s even more extraordinary is that the plot had never been viewed by the Flewers.

Boasting over 18km of sweeping hillside and woodland between Herefordshire and Worcestershire, the Malvern Hills is one of the most iconic landscapes of England’s countryside, offering uninterrupted views as far as the eye can see. With such impressive views, it’s not hard to see why Nick Carroll was approached by Jonathan hoping to make the most of them by building a family home on the cliff face itself.

“It’s always been a dream of mine to build something special,” explains Jonathan. “Ever since childhood, I guess I’ve just wanted to do it and then from watching shows like Grand Designs it inspired me to do it. I’d watch the show and think if these ordinary people can do it, I can too – they’re not all architects on the show. And, building something yourself means you can put a bit more of yourself into it – you can be more creative.”

Aptly named ‘Old Hollow’, the property became a completely new challenge for homeowner Jonathan who had unusually never seen the plot before purchasing. He explains: “We started looking at plots in 2007, then we ended up going to New Zealand; we had a plot finder so we could continue to look for plots in the UK because that was where Gill wanted to come back to at one point. Long story, short, one day a plot came up in Malvern. We did a bit research – you can do a lot now via the internet, like Google Earth, where you can actually see the view and the surrounding roads, and we just decided we’d make it work, so we bought the plot – thinking that if it really was that bad, we could sell it again; nothing would really be lost by taking the plunge. And anyway, building your own house is a huge risk, in fact, it’s borderline insanity.”

A top priority for Jonathan was creating an energy-efficient space, after being heavily influenced by Passivhaus designs and the ecological principles it implements in a property.

“Luckily in that part of Malvern, despite it being an area of natural beauty there’s a real mix of property styles – there’s no one design you have to stick to, so we could get away with designing a quite contemporary-looking building. We tried to make the house blend into the environment as much as possible, using natural materials and using timber.”

The newly-constructed, three-storey property features an ‘upside down’ design that maximises on the sweeping views and abundance of natural light of the Malvern Hills, with living areas on the top floor and bedrooms comprising the lower floors. Designed to be spacious and family-friendly, the living areas on the third floor are entirely open-plan for a generous and airy interior.

Speaking of the build, Nick said: “Our brief was to design a unique cliffside property that was founded upon the principles of Passivhaus design. To ensure we achieved the best results, I took the client along to a Passivhaus training session. We used materials such as stone, timber and glass to achieve this. Most of the stone we used was recycled from the hill itself, which we obtained during the digging process when laying the foundations. All products were chosen especially for their thermal efficiency.” Jonathan describes the build as the hardest thing he’s ever done, he explains: “I didn’t realise just how hard it was going to be. I think it was because it was all our money, all our time, I had to give up my career to achieve this and I loved living in New Zealand so I did feel a lot of resentment towards the house – I felt this was denying me this place that I loved living in and this job I enjoyed doing, and all I had was this house and this fatigue because it is so draining. It drained all my resources, all my energy and I was just tired; really tired. Anyone who has done this will tell you just how draining the whole process is because this is your home – you’re not doing it for money, you’re not doing it to prove a point, you’re doing it to provide a home for your family and you want it to be right. Unfortunately, not everyone you employ has the same desire for the end space – they just want to be paid for what they do, which is fair enough. So, it was hard but it would almost be criminal not to do it again because I’ve learnt so much about myself and I’ve learnt so much about building and what you can and can’t do along the whole process. It’s just a bit of a shame I didn’t start with a bit of a smaller project, learn some stuff, sell that and move on to the next project. This was a once-in-a-lifetime, all-or-nothing, go-for-it build, I tried to tick lots of boxes in one go. I learnt some expensive and difficult lessons along the way. I’m not quite ready to do it again but at the end of it, I was still thinking about what I’m going to do next. I don’t have a deep desire to do it right now but maybe I’ll do something when I’m a bit older because our house isn’t really suitable for someone in their 70s – it’s a family home.”

The structure was insulated internally and externally with all walls, floors and ceilings thermally upgraded to achieve the greatest level of thermal performance possible. This was extended to the specification of rooflights and windows chosen, with Jonathan wanting to maximise as much natural light and ventilation into the property. To support the energy efficiency of the home, triple glazing was specified as standard. Roof Maker’s 2 x 1m fixed flat rooflight was specified to be installed above the stairwell, with its triple glazing supporting the energy-efficient design of the property.

Jonathan continues: “If you asked me what my favourite part of the house was when we had just finished, I’d say the single design element of the house that I think has worked particularly well is the staircase. How it started from a concept and then evolved, I think has worked really well and it filters light through the house. It wasn’t an easy task. But probably now, after living in it for just over a year, I would say how complex the house is. It does so many different things, it is really ergonomic, you think it supplies you with pleasure in one place and then another part of the house gives you something completely different. It’s really complicated, it doesn’t do just one thing. Every part of the house is different. The house is so much ‘us’, it’s complicated but it delivers.”

In total, the project took three years to complete, with Nick and Jonathan working closely together throughout the entire process to create a unique family home. From its upside down approach to the layout in the cliffside and the ecological design principles, Old Hollow is a one of a kind property that will be part of the Flewers family for years to come. Jonathan concludes: “The advice I would give to anyone planning to self-build is you have to be absolutely committed to what you are doing. You can’t do this and think it’s going to be easy. If you’re not 100% committed to your aim of building a house, then I’d be very careful with your life savings. If you don’t have resilience and you crumble at the first problem, then you won’t get through it. Make sure have good support – if it’s a husband and wife partnership, make sure you both want the same thing out of the project. Keep a very healthy contingency, people always run out of money and end up making compromises. I made compromises on this build at the beginning because you can have the best of everything but then if you run out of cash and you’re halfway through the build you just end up with rubbish at the end. So, for me it was the structure and the core of the house that had to be right, then all of the ‘bling’ stuff you could add on – if you had any money at the end. That was more important to me, but it is actually the finishes at the end that you will see – the door handle that you put your hand on every day – and if you’ve only got enough money for rubbish, it’s only going to make you annoyed. It’s a really difficult call between making sure you spend enough money on the really important stuff, like the fabric of the house and the systems within the house, which you want to last forever and not having anything left to make it look pretty, or not spending enough on the fabric and spending too much on the pretty stuff. Just try and have a very healthy contingency and have a realistic plan for what you’re going to spend your money on. And remember, if you have lots of glass, you have lots of windows to clean!”

More in this category: « How one family in Highbury have transformed the way they live with a simple extension A home with a view in Dalgety Bay »
Login to post comments
back to top