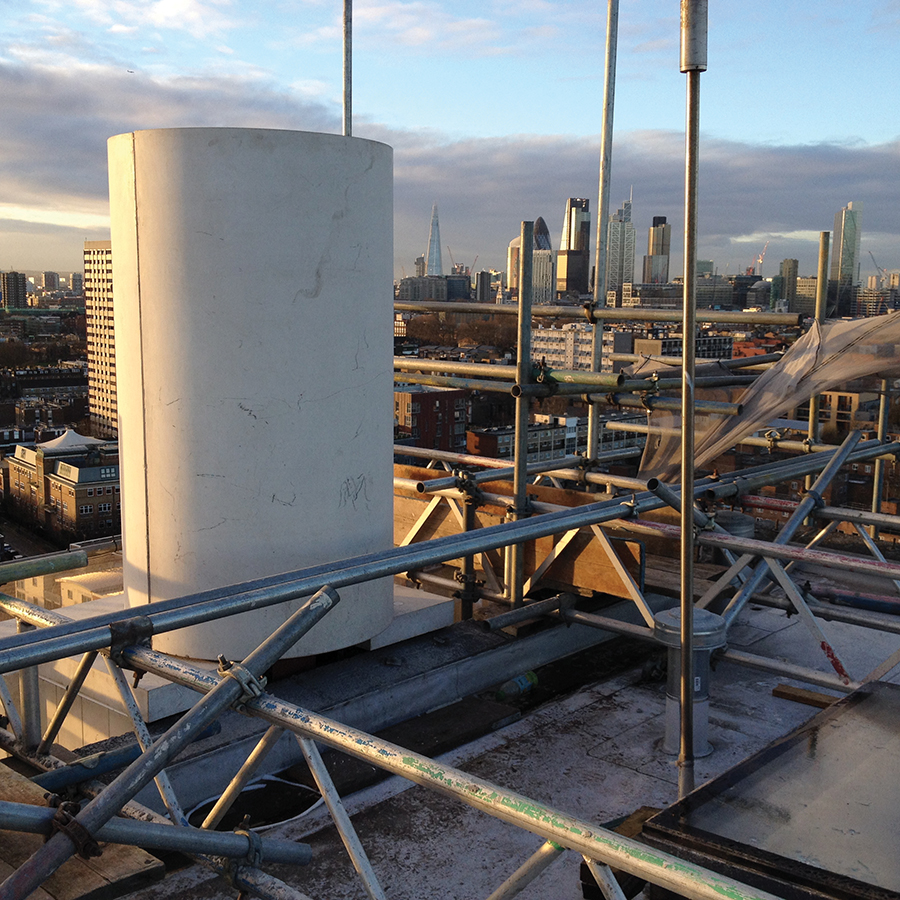 When Kent-based Architect Brian Heron and his wife Ayesha discovered a disused water tank space on one of Bethnal Green’s iconic tower blocks for sale for residential use, they knew this was a once-in-a-lifetime opportunity to create their dream penthouse apartment.

Originally owned by the council, Keeling House is a Grade II* Listed Brutalist block of flats that is steeped in history, having been originally designed by respected Modernist Architect Sir Denys Lasdun in 1959.

Having previously been a tenant in one of the building’s other flats that underwent an award-winning renovation back in 1999, the disused 653ft² concrete shell was the perfect canvas for Brian to design a unique home that maximised on living space through clever design and configuration, along with the selective specification of internal building materials.

“As an Architect, there is always a desire to live in a space you have designed yourself,” explains Brian.

“The water tank was on top of a Grade II* Listed Brutalist block of flats from the 1960s. We had been living in the block for a few years already and had been looking around East London for self-build plots. When the disused water tank at the top of our building came up for auction, we knew we had to seize the opportunity.

“We bought the property with planning and listed building consent already in place so externally, we had to keep in line with what was already consented. There were significant planning constraints regarding the exterior of the property to ensure it enhanced the existing building rather than detracting from it. One example of this is that the planners did not allow any projecting balconies or rooftop balustrades to ensure that the overall silhouette of the building remained unchanged.

“There were only six months left before these consents expired. We applied to extend the existing consent and it took a further year before the new consents were issued.

“Internally, the key was really to make a relatively small space work for us as a family,” explains Brian. “We wanted to keep the space as honest as possible and true to its origins but also make it a unique space for our family.

“Being on the 17 and 18th floors was particularly challenging in terms of getting materials up there and dealing with strong winds. We also had to extend the existing stair core up by a further three floors which was extremely difficult in terms of construction logistics and costly in terms of scaffolding.”

Throughout the project Brian wanted to stay true to the building’s industrial influences, a dedication that required 18 floors of scaffolding and the closure of surrounding roads three times for cranes to install glass reinforced concrete panels.

“The open-plan reception and kitchen occupies the 17th floor, with full-height glazing on both sides looking east and west. This is partly frosted and partly louvred for planning reasons, providing remarkable framed views of the surrounding city. The bedroom is on the 18th floor, containing a raised OSB bed with a child’s bed beneath and built-in stepped storage alongside. It faces east so that you can lie in bed and watch the sunrise, and there is an opening rooflight above for stargazing. The bathroom is on the western side and enjoys the sunsets. A freestanding Italian square bath doubles as a shower, with a vertically sliding tap.

“The aesthetic is deliberately functionalist, with walls and ceilings made from OSB, and micro-cement polished concrete flooring. The German flat-pack kitchen continues this narrative.”

The concrete structure has been insulated internally with the walls, floors and ceilings all being thermally upgraded to enhance the energy efficiency of the property. Brian wanted to keep the space feeling raw and honest, with references to its former use as an enclosure for water tanks. The walls and ceiling are therefore lined with OSB, which provides a striking visual warmth but is also robust and hard-wearing. It also transforms every surface into storage with the ability to hang things up with ease – providing essential space-saving tools needed in any one-bedroom flat.

Brian explains: “We wanted to keep the space as honest as possible and true to its origins but also make it a unique space for our family. We knew we wanted a polished concrete floor and as the sandblasted glass was already a requirement of the planning consent, we wanted to bring some visual warmth to the walls, hence the OSB walls. This had a double function as it also meant the internal insulation could be continuous, without any cold bridging, and it also meant we could hang shelves or built-in furniture on any wall surface.

“We initially tendered the job to a main contractor but they were too expensive so we took the role of project managing the build on ourselves.”

The inclusion of glazing was a focal point for Brian’s design, offering standout views of the capital city, with sunrises from the bedroom, sunsets from the bathroom and stargazing from the Roof Maker rooflight.

Brian wanted to fit an opening flat rooflight directly above the bed, to help bring additional natural light and ventilation into the bedroom. Triple glazing was also an essential requirement to support thermal regulation. After searching online, he decided on a 1 x 1m flat electric sliding unit by Roof Maker.

“The rooflight is the crowning glory of the bedroom. We designed a raised bed to sit directly below the rooflight, so we can lie in bed at night and look up at the stars. It’s beautiful.

“There is a lovely play of light over the bed during the day as the sun passes overhead. As the rooflight is an electric slider, it can open to provide additional ventilation and access to the roof for maintenance, or just to take in the amazing 360° views of the London skyline.”

When asked what his favourite thing about his new home was, Brian responded: “The quality of the light and the views. The flat is oriented east-west and being fully glazed in each direction, you get to enjoy both stunning sunrises and sunsets over the London skyline. The skies and the ever-changing weather are amazing this high up.

“The project was completely unique and we are very happy with how it turned out. It was a real labour of love for us as a family and my wife Ayesha Tariq deserves huge credit for the stunning interiors she created and turning it into our home.

“Perhaps unsurprisingly it took much longer than expected. We commenced construction in summer 2014 and moved in May 2016, so the build took almost two years but the main reason for this was that I was project managing the build in my evenings and weekends, fitting it in around my day job as Project Architect for Ian Ritchie Architects on the Royal Academy of Music project.

“If we could have afforded to, it would have been much more efficient for me to take a break from my work and concentrate 100% on managing the build but as it was, I had to do what I could in evenings and weekends which inevitably means the build took much longer than anticipated.”

All in all, the project cost £420,000 – which was £170,000 more than initially budgeted. Costs quickly rocketed due to complications associated with the flat being located on the 18th floor of a building within a heavily built-up area.

Brian explains: “The scaffolding was required for much longer than expected so there was an increased cost there and we had to abort a crane lift due to high winds which was also extremely costly both in terms of cost and programme.”

Brian’s final advice for any budding self-builders is: “Trust your architect and speak to them as early as possible in the process. A lot of value can be added with a few strategic decisions at the start of the project. Money spent maximising daylight is typically money well spent.

“Also, avoid late changes to the design as the cost impact of making changes on site is much more significant than making the same change prior to tender.”

More in this category: « Building for a breathtaking view An upside-down hilltop holiday let »
Login to post comments
back to top