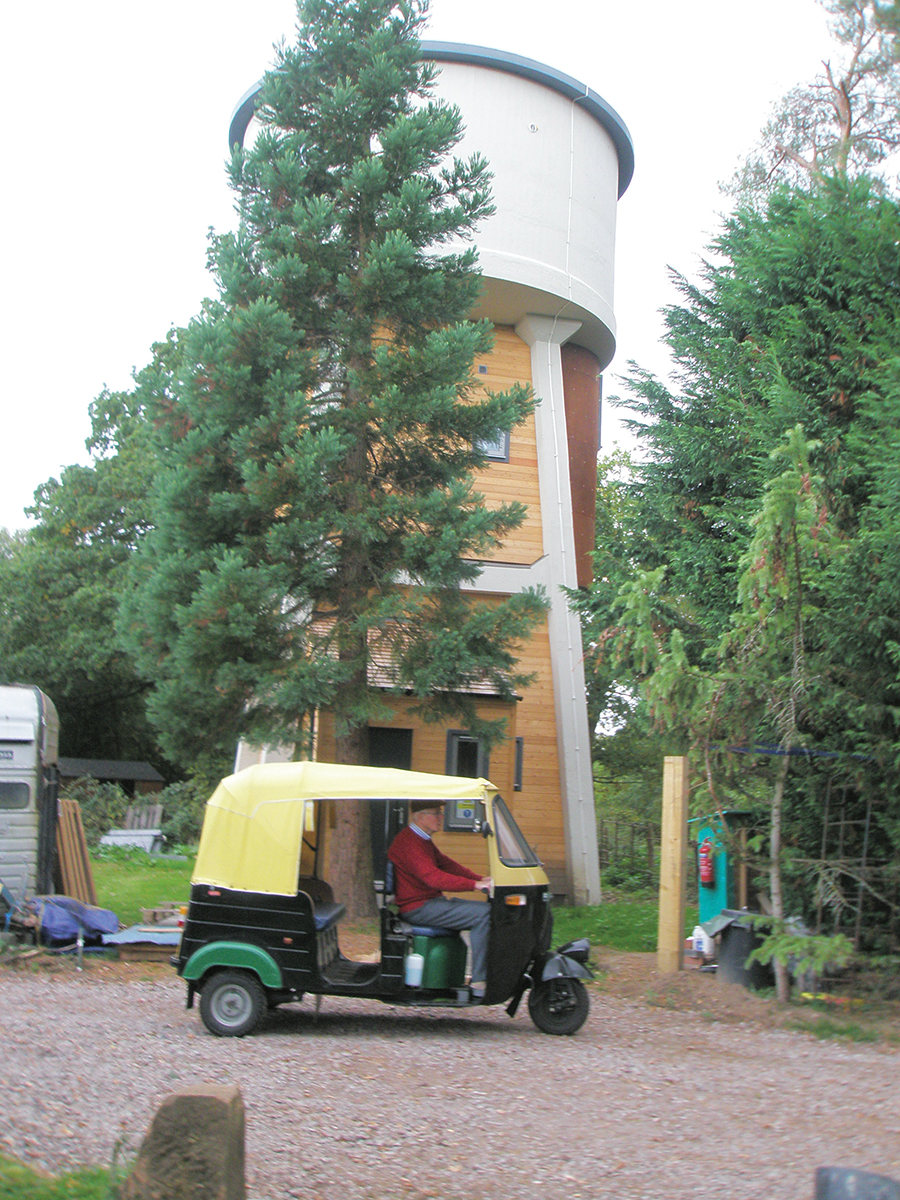 A retired neurosurgeon is poised to welcome his first Airbnb guests to a converted concrete water tower at the bottom of his garden – thanks to an imaginative transformation of the decommissioned edifice.

Peter Stanworth, who lives in Warwickshire and spent time in war zones such as Afghanistan, Iraq and Kosovo helping soldiers with traumatic head injuries, is about as far removed from the slipper-wearing, armchair-dwelling retiree as it is possible to be.

He and his wife Janet live in a 17th-century farmhouse on a smallholding on which he not only keeps bees, ducks and grows vegetables but also houses a steam engine and a tuk-tuk – unusual vehicles being one of his many passions.

Peter explains: “We bought the property with the water tower in the back garden. It was built in 1932 by Kenilworth Urban District Council for £287. It was used for about five or 10 years, but it leaked and has since lain empty.

“The impetus to convert it came when lumps of concrete kept falling off due to spalling. The reinforcing bars were rusting, expanding and causing the concrete to crack. As it is part of the village’s heritage; I felt that it ought to be preserved.

“Demolition would have cost £40,000 to £50,000 as it needed to be demolished piece by piece and having the concrete repaired would have cost £38,000. In the meantime, I’d been looking to use it as a garden lounge using a fire escape from the local hospital which was being demolished. As it’s in the greenbelt, planners would only accept it as holiday accommodation. Hopefully it will be on Airbnb’s website in a few months’ time!”.

Peter looked around for a developer who was up to the challenge of such an unusual conversion and came across Anton Richards, a Nottinghamshire Builder from WA Richards Contractors, with a morbid fear of boring day-to-day extensions and a passion for tackling projects no one else will touch.

“Our company speciality is unusual conversions and agriculturally-based projects such as tea rooms and farm shops. I want to work on something that no one else knows what to do with – the weirder, the better. I started out as an agricultural builder working on things like milking parlours and silage clamps,” explains Anton.

So a 12m concrete water tower on four legs with a pill box on top was just the weird construction which got Anton’s pulse racing.

An excellent working relationship with Warwick District Council Building Control enabled him to iron out issues such as where to site the staircase.

Along with the challenges to be expected when converting a non-standard building, other issues included working on heavy clay ground and cutting into the existing Victorian drainage system.

One decision which Anton found easy was choosing which insulation and breather membrane to use.

“We normally use Actis. And in this case the client wanted the insulation to be as good as possible – so Actis fitted the bill.”

“There were certain areas where I had to use different products. Because of its construction method there was no set standard. 1935 concrete varies from 10" at bottom to 8" at top. The solid fill roof was difficult because of the different thicknesses of reinforced concrete. And the solid floor varies from 4 to 15". So I had to stuff the voids between these and the timber frame with mineral wool.”

The 70m² bijou upside-down hilltop holiday let has two bedrooms – one on the ground and one on the first floor – with a spiral staircase leading up to the lounge in the old water tank, which offers spectacular views across the trees towards Kenilworth Castle, the Cotswolds, Rugby and Coventry.

Such a design is not without its challenges – not least is how to get the furniture in.

Peter explained: “We have a three-seater leather sofa which needed to go into the tank. We needed to move that and the white goods into the hole in the tank before the spiral staircase was installed. Anton and Tony had to carry up everything manually.” Despite the obvious challenges the project created, Peter is extremely happy with the end result.

“I am a great admirer of Anton’s work. He has produced a first-class job despite many difficult problems and only accepts the highest of standards,” concluded Peter.

More in this category: « A concrete canvas A labour of love »
Login to post comments
back to top