Building for a breathtaking view 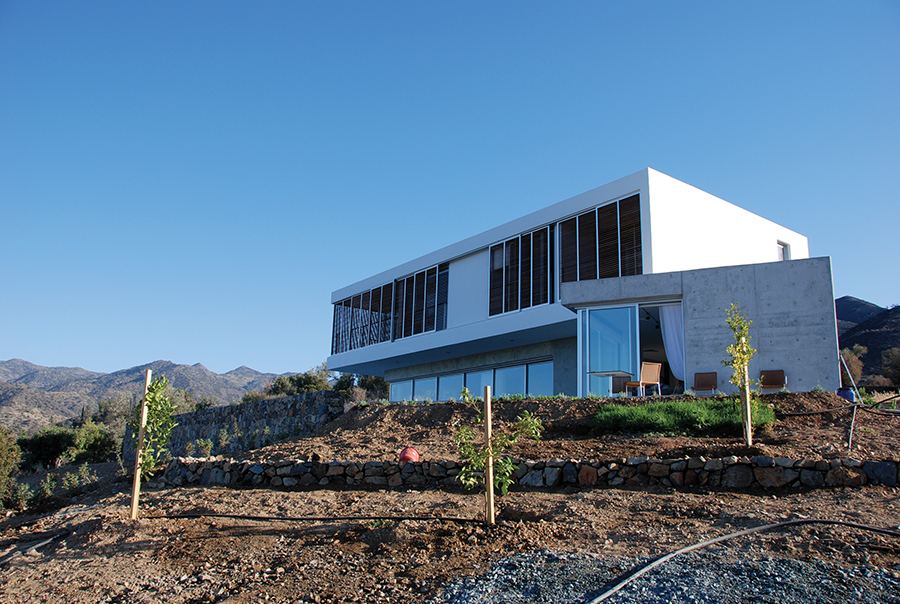 Christopher Ploutarhou’s parents had owned the same plot of land in Cyprus for many years and he’d always loved it there. The view from the plot was phenomenal so it seemed clear to him what he needed to do.

It was really a no-brainer,” Christopher explains, “the plot of land belonged to my parents who are from the village, called Ora, in Cyprus. I always wanted to build on it, and it seemed like the right thing to do, especially when you consider the magnificent views we have from that spot.”

Describing his home, Christopher says: “The house is a four-bedroom holiday home originally designed for a family, which can cater for eight people. The general concept was all about responding to the view. The site is on a hill so we wanted a view from all the rooms over the valley.

“The ground floor is sunken into the hill, so from the back it looks only one storey high. We put the staircase at the back; it’s basically two oblongs sitting on top of each other, and the top one is cantilevered by 2.5m over the ground floor to provide some shade. There’s lots of glass in all the rooms. The ground floor living area is one continuous space, and the doors all fold in so it can be opened like a pavilion.

“Access to the plot was what guided everything else. We wanted to drive up the hill so it was to one side of the plot. Finalising it came quite naturally because this and the size of the plot put some restrictions on us and then we fit the rest around this plan.

“The only requirement for the project was to maximise the garden space in front of the house. The house itself sits against the rear boundary. Having the garden at the front enabled us to have a swimming pool there as well, and it all contributes to the stunning views you have from inside the house.

“Getting planning permission for a modern house up in the Troodos Mountains was a challenge! It took quite a while but we got it eventually. We had to do a little bit of persuading, but after it got accepted and was built, everyone was really happy with it.

“The project took slightly longer than predicted. It was four years altogether, with planning taking approximately two and construction another two.

“The biggest challenge was actually to get builders who were willing to do the work up in the hills,” explains Christopher. “It’s an awkward place to get to and many people in Cyprus are reluctant to travel to build outside the cities there. Luckily, we found a local builder who lived in a nearby village and he did an excellent job.

“I collaborated with a local architect to help manage the process – so an architect employed an architect! They had the local knowledge and were, of course, more familiar with the Cypriot requirements, and how to build there, so you could say that the design was a collaboration between us.

“We wanted a building that looked contemporary, but it was also important to be sympathetic and respond to the jaw-dropping views. Therefore, we chose natural local stone for the perimeter walls, which are dry-built, and this worked really well. We also limited the material palette; most of it is just white, and all the floors were made using a grey, speckled terrazzo, which incidentally hides dust really well!

“The space is naturally ventilated and we don’t always have to have the air con on. This is because of electric glass skylights above the staircase, which create a tunnel effect where the hot air comes in, but creates a breeze through the house, and it really works. As it’s all south-facing, we installed timber louvres that can slide in front of the full wall of glass on the first floor level. In addition, we also collect the rainwater for showers.

“The ground floor is very much open-plan. The living room relates to the outside and to the location of the swimming pool. The kitchen is at the opposite end where the patio is; still a short distance from the pool. The bedrooms are on the first floor and the large windows offer stunning views across the valley. The rear retaining wall sits up against the hill, and the columns inside, are all exposed concrete. The ground floor ceiling is 3m high. And the ground floor internal colour scheme is similar to the external floor finish as well, so it looks like it’s all of a piece.

“The entire design concept was about responding to the landscape, so we tried to limit the amount of excavation that we did. In addition, we tiered the garden so it cascades down to the road from the higher level. We used the same local stone to create the terrace effect as the boundary walls.

“We wanted a natural garden, not anything too sophisticated or contrived. However, the plot is a funny shape, like an axe. It’s almost as if you drive up the handle and the site itself is the axe head, so this guided what we could do with it.

“We’ve introduced local fruit trees into the landscaping which we also rely on to eat from, which is nice. My dad did the planting, and he built all the tiered stone walls. My parents live in the house a couple of months every year so he loved contributing, especially as he’s never had that experience before.

“The local community love it! Although they questioned it in the beginning, it’s actually been a catalyst for more people to move into the area.

“I really love the proportions and the openness of the spaces. The vista from within is breathtaking, and it’s really lovely how the outside feels part of the inside. I can’t actually think of anything that I would change.”

When asked if he would do the whole thing again, Christopher said: “I would, and I really recommend collaborating with people who have local knowledge when managing a project in a country you are not permanently residing in even if it is where you originally come from. I’d also say get a really good team of consultants to support you, interview them and get references from other people too. It may slow down the initial planning and getting started, but in the end you will not regret it.”

More in this category: « A home that erupts style and innovation A concrete canvas »
Login to post comments
back to top