Cathedral out of the city 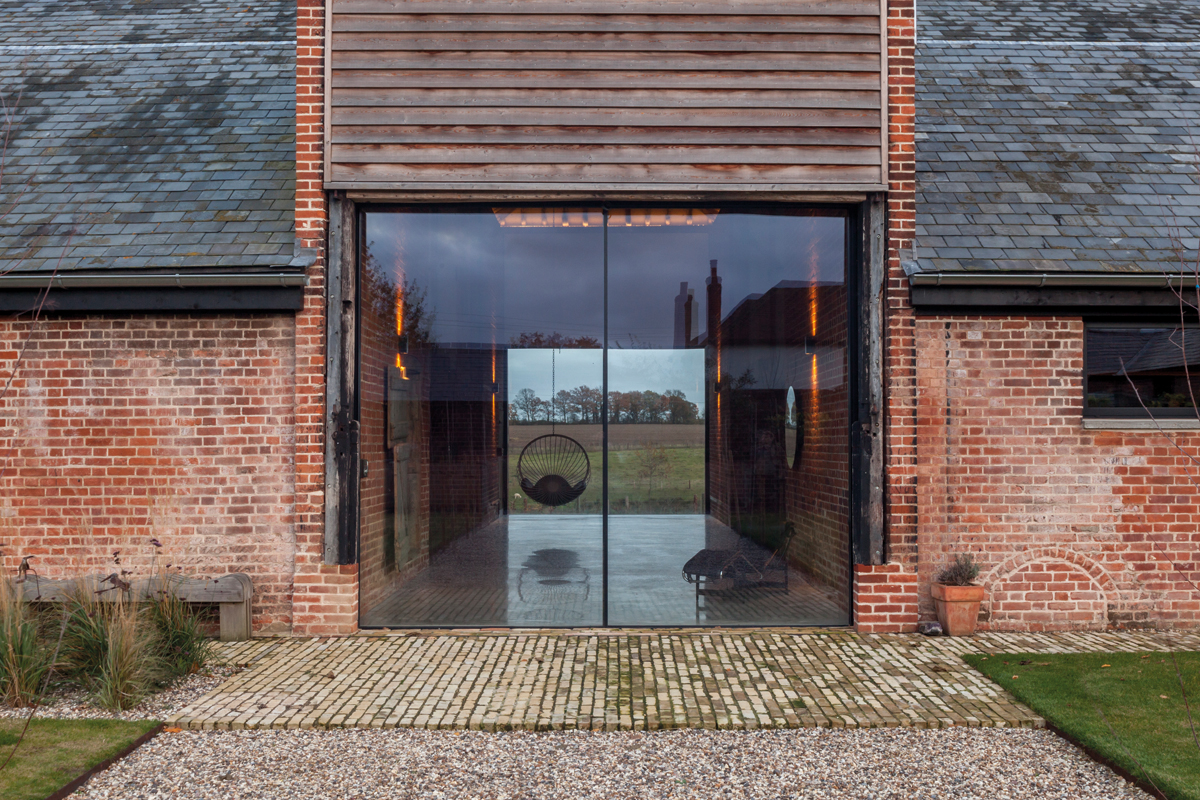 Having previously tackled an extension on Jeremy and Hannah Witt’s Victorian semi-detached home, Architect David Nossiter was delighted when the pair informed him of their next venture.

The Witt’s former extension project was undertaken by London-based David Nossiter Architects and, having built-up a close relationship with the two, David himself was called back in to talk through Jeremy and Hannah’s plans for their next home-building scheme.

“Jeremy is always in search of a new project,” explains David, “it’s what he enjoys doing. Initially, he contacted me with an interest in undertaking a self-build project, however, after extensive research; Jeremy’s concept of self-building reconstructed into a renovation master plan.

“While the two were exploring the area for their ideal plot, they noticed there were many barns up for sale and their objective soon made a U-turn. I started to attend viewings with Jeremy; visiting various plots and helping him select the right one for both him and Hannah. He would send me details of potential properties and we would travel up together to investigate possible sites.”

After much consideration, Jeremy and Hannah eventually set their hearts on a dilapidated Grade II Listed barn in Assington – a charming village situated on the border of Essex and Suffolk, just four miles south-east of the market town Sudbury.

The build, entitled Church Hill Barn, stands on the edge of Assington village bordering a field home to rare breed cattle. “There is a covenant on this field,” David explains. “It cannot be built on, and this was particularly beneficial for Jeremy and Hannah as this guaranteed that this scenic view was theirs permanently and there will never be a possibility for anyone to build on it.”

Church Hill Barn dates back to the 1800s and, unlike the conventional structure of many other barns found in the UK, this one was somewhat unusual. “Most barns are constructed with a timber frame to form a main space, often with aisles and a central bay housing a pair of large doors,” comments David. “However, this particular barn was entirely contrary to traditional form. The structure is mostly of brick forming a cruciform plan with a series of rooms at each corner all under one roof. The idea for this arrangement emerged with the model farm movement around the turn of the nineteenth century; when farming methods were trying to increase efficiencies. The local squire who originally owned the farm built Church Hill Barn to follow this movement and house various farming methods and animals under one roof. In the early nineteenth century, brick seemed the logical material to use.”

Church Hill Barn has an impressive footprint; the site boasts a zone covering 2670m² while the barn itself is spread across 564m². David compares the barn to a cathedral with its towering ceiling height and open space. “The barn is very large and we wanted to preserve that quality when undertaking the renovation,” he explains. “Originally, the roof timbers were visible and we ensured that these were still clear even with the new roof in place. We also kept the original red bricks of the internal walls. This all really dictated that we were actually going to do as little as possible to the structure of the barn; turning it into the house that both Jeremy and Hannah required; without changing it too much.”

Having worked with David on an earlier project, Jeremy and Hannah were both aware of David’s architectural style as he was of theirs. “Jeremy is fond of contemporary architecture,” says David. “He sought something that was both modern and energy-efficient – he was also keen to use local craftsmen for the build.”

Jeremy and Hannah purchased the site with planning permission, as David elaborates: “The barn had permission to turn it into a house. It had been granted this originally, however, no one bought it. The landowners realised that as it stood; two buildings located in what is now the courtyard and in an extremely poor state of repair limited the scope for outside space. With this in mind, the landowners approached the planners for approval to take down these two buildings to allow for more external space. The application was successful, however, it came with the condition that the materials from these two buildings were re-used. Jeremy and Hannah purchased the site with this permission. The approved design was for a very traditional, vernacular residential property; with leaded windows and the space divided up into lots of cellular rooms. This, however, wasn’t what we wanted at all – minimal spaces, large expanses of glazing and a very open-plan identity is what Jeremy and Hannah required from this build.

“So, although we had planning permission in place to remodel the barn into a house, we had to go back to the planners again. It actually worked in our favour as we had continual discussions throughout the build surrounding various aspects. We went back to the planners with different ‘packages’ – for example, windows, demolitions, new openings, the roof – and each time we came to carry out a section on the barn, we had a meeting with them. They were very much on side.”

These phased applications allowed for Jeremy to continue working on site. “We applied for planning permission in packages just before work was scheduled to start,” David explains. “The first package was for the roof, we then went on to apply for windows and travel around the build in a methodical manner.”

The roof proved problematic for all parties concerned in the renovation of Church Hill Barn. “The pair were living in a caravan whilst we were undertaking works and, with the infamous British climate, the weather was poor. The roof accommodated several holes and water was cascading through the barn,” recalls David. “There was a lot of pressure to renew the roof but, at the same time – because we wanted to keep the roof timbers in place – we had to raise the height of the roof. We, therefore, had to reapproach the planning department to gain planning permission for this aspect – and this took much longer than expected.

“While we were tackling roof issues, Jeremy was under pressure to start repair works, however, as Church Hill Barn has a listed status; we needed to ensure that the roof was repaired as a priority. Due to its vast size, this turned out to be a substantial portion of the work – in itself, it took several months to complete. After the roof was finished, the barn started to dry out and we could start repairing rotten internal timbers.”

David continues: “Whilst we had a fairly healthy budget, the project was so large that price per m2 didn’t go anywhere. Jeremy undertook much of the work himself and asked family members and friends to help out. We had to keep costs down, but at the same time there were certain elements that Jeremy wanted – for example, he wanted concrete floors and high-quality windows. And, by making it open-plan, it meant that we didn’t have as many walls. Both Jeremy and I were keen to avoid using wet plastering trades where we could. That led us to plywood; we’d seen other projects where they had used OSB boards – these looked good in photographs, however, in reality, it’s not an everyday finish that would appeal to all. So, the next alternative was birch plywood; which was a little more expensive yet not overpriced.

“Externally, to one side of the barn; there’s a walled courtyard, enclosed by a very old wall and to the opposite side; there are fields. The barn had large openings and what we’ve tried to achieve in this design is to link these openings so that you can see straight through the barn across to the fields. For example, in the shower room, we have included a small opening that presents a second framed view out to the fields.”

“I think this system is very good,” comments David. “It’s a little bit of an investment, but it does keep energy bills down and it works in the vast space. The ceilings reach approximately 8m tall yet it always feels warm when you’re inside the space and never draughty. I think it’s important for self-builders and home renovators to think about this aspect of a home. Sometimes you do have to spend a little more money than anticipated. Many may want a few key commodities that are of a good quality and expensive but they have to determine what those are.”

Although they didn’t actually have a finite deadline, Jeremy and Hannah aimed to have the project completed by the summer and it was. After two years living on site in a caravan, they were pleased to have a permanent roof over their heads. Of course, when they moved in there were still a few minor sections to complete but, with a project of this scale, there would always be something to do; other phases to work on at a later date.

When asked what the local community thought of Church Hill Barn, David enthused: “They really like it. Some people in the village used to work at the barn when it was operating and, having been derelict for quite some time, the community are really pleased that it’s been renovated. Jeremy and Hannah have even hosted local village events at the barn.”

More in this category: « How one Derbyshire couple successfully restored their 1000-year-old corn mill Contemporary self-build nestles seamlessly into picturesque Perthshire hillside »
Login to post comments
back to top