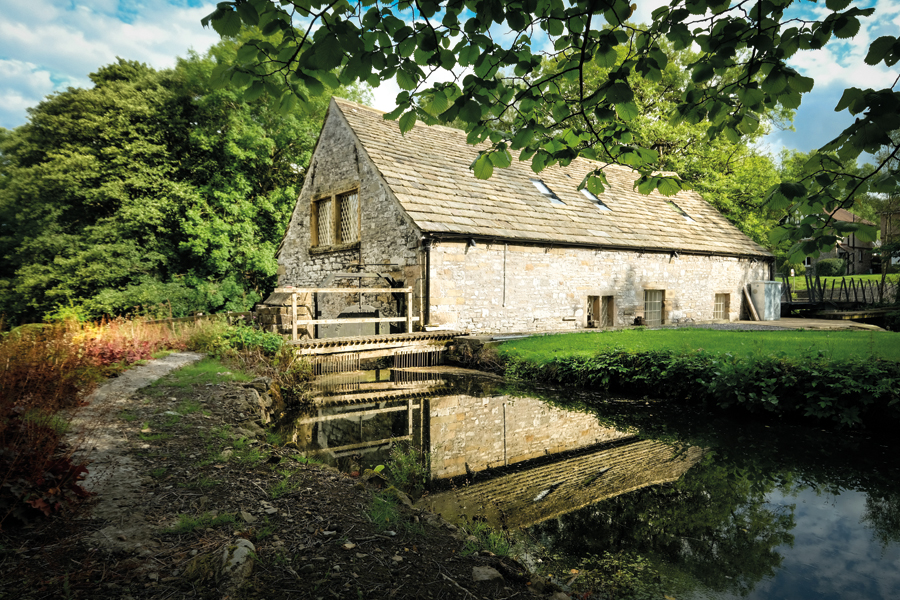 Robert Griffiths and his wife Hilary had been living within their eight-acre development in the idyllic village Ashford-in-the-Water for nine years before they decided to restore the 1000-year-old corn mill sited on the estate.

The site, which houses several properties including Robert and Hilary’s home; an old barn where corn was stored in the estate’s early days; the mill itself and numerous fields, is situated within the picturesque Derbyshire Peak District.

And then there were two

Robert, a retired Dental Surgeon, and Hilary, a retired Teacher, purchased the mill estate nine years ago when their children flew the nest. Soon after their children’s departures, the couple started their search for a smaller property in which they could enjoy their retirement. The Grade II Listed Ashford Mill proved perfect for the couple’s needs; providing Robert with an extensive project to undertake during his retirement years, and for Hilary; the period property she’s always longed for.

Upon purchasing the land, the Griffiths family renovated the house situated on-site – one of the many structures that can be found on the mill’s plot – and settled down there. Shortly after, the pair put forward their application to restore the historic mill. “It took a good five years for us to get planning permission for the mill,” explains Robert. “This was partly due to the stringent requirements of the park’s authority; they were very particular on how they wanted the mill to be restored and what we could and couldn't do.”

Ashford Mill plays a significant role in the village of Ashford-in-the-Water. The mill’s existence was recorded in 1086’s Domesday Book – a manuscript record of the ‘Great Survey’ of much of England and parts of Wales completed by order of King William the Conqueror.

With such a notable project on their hands, both Robert a Hilary remained unperturbed by the project at hand and immersed themselves completely in the restoration.

The mill was still intact when the couple purchased the site back in 2008, so to bring it back to its former life was extremely beneficial. “The site is smaller than our previous home,” explains Robert, “however, it’s bigger in a different respect. Taking on this project was something that would keep me happy – and I do love a project!”.

“I had never done anything like this,” he continues. “It was a long process but when I start something, I never give up. The more problems and challenges that arose, the more determined I was to resolve them and complete the project.”

With Robert’s tenacity and positive standpoint, each complexity that emerged was handled in a pragmatic manner, as Robert explains: “The most challenging aspect of the project was the doors supplied by IQ Glass. The authority didn’t want to change the big white wooden doors. They requested for us to install a glass lobby rather than the doors we wanted. However, it was impossible to make it weatherproof and, in all honesty, it wasn’t exactly what we envisaged visually. They wouldn’t let us have the doors unless they were ‘smart’, therefore, we went on the hunt for some doors that we believed would please the planners. Eventually, we found IQ Glass and appealed and they allowed us to include them – as a matter of fact, the planners now love them.

“We managed to gain approval for the doors by keeping the mill doors and adding the contemporary all-glass doors directly behind them. Today, the front doors are beautiful.

“We were faced with numerous challenges when undertaking this project, namely the aforementioned doors and also the fact that the mill on one side was 4ft below water, so keeping the water out was quite tricky. We came across lots of issues, but we got there eventually and dealt with a lot of problems ourselves.

“It was quite difficult to remain within the budget given that it’s such a historic building; nothing is square so it took a lot to ensure that we weren’t throwing money away.”

A man without a plan

Unlike many self-builders we feature within i-build, interestingly Robert didn’t have a master plan when it came to restoring the mill, yet the result is magnificent. “The only plans were those drawn up by an architect in order to get the build through the planning stage,” says Robert. “I did try to attempt it without an architect, but I was getting nowhere. I started work with a conservation architect in 2014, it went to the planning committee a year later and we were approved in 2015. As soon as I hired the conservation architect, it was like opening a magic window!”.

Following their planning news, Robert and Hilary started work on site imminently. “We started work on site in March 2015 and finally completed this summer, in August,” enthuses Robert. “Funnily, the physical side of things was the shortest; it was the planning approval that took the most time. Each time we wanted to change an aspect of the restoration from the architect’s plans, it would take the authorities three months to respond, so we would approach them with a multitude of requests to speed up time.”

Prior to completing the mill’s restoration, Robert successfully restored a 150-year-old turbine and the site now produces hydropower. “Many mill experts informed me that it was impossible to restore the turbine, but I had nothing to lose, so I attempted to repair it. I was successful and we now feed power back into the national grid. We were featured on BBC’s Countryfile where they came out and tested the turbine live on TV – I didn’t even know if it was going to perform, but it was a triumph. That was back in 2011; around two years before we started work on the mill. It cost around £40,000 to get it going again, however, it paid itself back in 18 months so it was extremely worthwhile.”

The sensitivity that surrounded the mill’s reinstatement brought with it many complexities for Robert and Hilary, however, with Robert’s endurance each obstacle was ingeniously defeated. For example, the bathrooms are housed within grain bins as the park’s authority wanted to keep the aesthetics of the bins. Inside, Robert has lined them with teak and the appearance is stunning.

“When we were talking to the park authority they didn’t want us to change the mill much,” says Robert. “Today, 95% of the mill’s workings are as they were all those years ago. What we had to do was incorporate modern elements into the build. For example, there were some unpleasant concrete floors within the mill, but the authorities didn’t want us to change them so we kept them; polished them up and brought them back to life.”

What the mill did lack was light, and Robert felt it was best to introduce a touch of modernity to the electrical side of the build. “We thought the best way to tackle the light issue was to opt for computer-controlled lighting,” he clarifies, “we’ve got LEDs all over the mill and we can change the illumination and mood of a room by a simple press of a button – which makes up for the fact that we don’t have many windows.”

Builder on a budget

Robert sourced many items within the mill from overseas; from reclaimed lighting and furniture to the teak that lines his original grain-bin bathrooms. “As we approached each section of the mill, we would hop on the internet and try to find some ideas from there,” informs Robert. “Most of the furniture is from clearance sales and the lighting is reclaimed from countries such as Russia and Poland.

The teak in the bathrooms I purchased from Indonesia; it worked out at about £25,000 here in the UK but was an alarming £5000 to import. The bank thought I had lost my money at one point and I started to have my doubts too, but much to my surprise I received an email notifying me that my shipment had been loaded onto a container and would be with me in March (four months after I ordered it). That was very exciting. Furthermore, it turned up at my front door. The teak is absolutely alluring; you can smell it as soon as you enter the bathroom.

“Many of my discoveries came from online investigation as the toughest part of this process was finding the right materials. One example is the windows; the planners wanted me to make new lattice windows for the openings and I found identical second-hand patterns via an unforeseen source; eBay. I learnt how to source things on Google and eBay and that’s how I came across the reclaimed lights and furniture.”

Robert continues: “It was a long, slow process but I’m glad we have done it and we were in by summer this year. We undertook this project because of the heritage of the site and the beauty of the building. What was marvellous about the whole process was that every workman that came to the site loved this project, therefore, tried their best.

“My favourite part of the mill has to be the kitchen; it’s a lovely big, open space and I built it myself. The island that sits in the middle is 14ft long; the joiners said it was the biggest piece of oak they’ve ever had to put together. I’m also very fond of the lighting – without the LEDs and reclaimed lights the mill would be a dead building; the lighting has brought it back to life.”

When asked if he would have done anything differently, Robert replied: “In all honesty, I don’t think there is. There’s only one minimal thing I would change and that’s adding a switch for the exterior lights. I suppose it’s a good thing that we’ve finished the project and there’s nothing I’d really change. Overall, it’s been an enjoyable but traumatic experience – most people said I was nuts to take this project on! That said, it wasn’t as difficult as it looked; that could be perhaps because my builder was very good at his job.

“My advice to anyone taking on a project such as this is to talk to the planners as early as you can. It may be because we live in a national park, but our planners were very particular; you have to get them to trust you as, effectively, they will dictate what your building will look like.”

More in this category: « A stunning Tuscan farmhouse has been radically transformed to meet 21st-century needs Cathedral out of the city »
Login to post comments
back to top