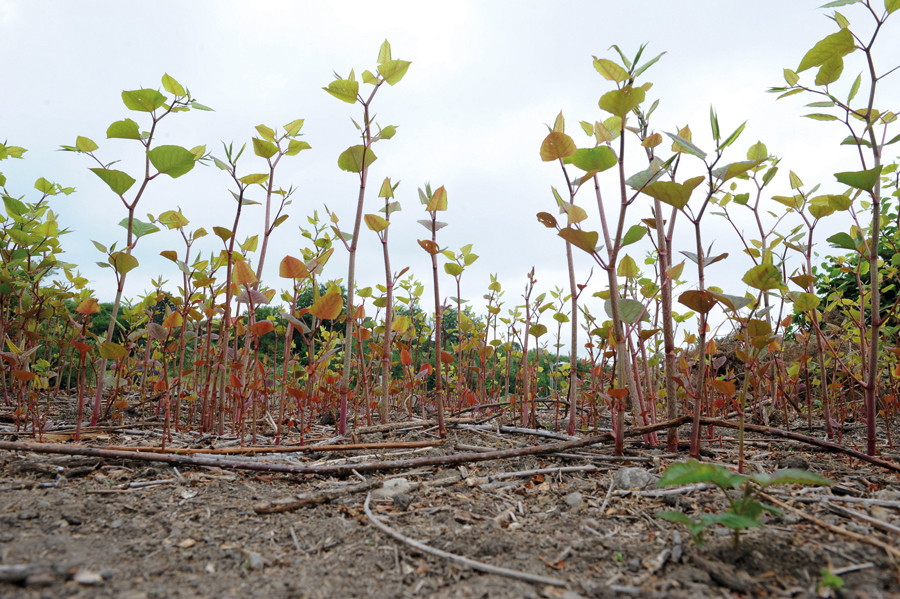 New research reveals that 78% of those aware of the infamous Japanese knotweed would be put off of buying a property if they discovered the weed was present in the garden. Reasons for this included the concern that it cannot always be removed (69%) or that it would be too costly (56%) or time-consuming to do so (57%).

The survey, carried out by YouGov and Japanese knotweed removal specialist Environet UK, suggests, whilst most people are aware of the weed, there is a high level of myth and misinformation around the threat it poses and the options available to those who discover it on their land or a site/property they wish to buy.

Japanese knotweed was first introduced into the UK from Japan in the 1850s as an ornamental plant, but it is now number-one on the Environment Agency’s list of the UK’s most invasive plant species, described as “indisputably the UK’s most aggressive, destructive and invasive plant”. Growing up to 3m in height, it spreads rapidly and can push up through asphalt, cracks in concrete, driveways, cavity walls and drains in its quest for light and water.

Awareness is particularly high in areas where the spread of the weed has been most prolific according to Environet’s own records of treatment, such as Wales, where 95% of respondents are aware of it, and in the south of England (80%). Yet, those aware of the plant across Great Britain are largely oblivious to their legal obligations to deal with Japanese knotweed to prevent it spreading.

Only around half (49%) know that a home or landowner is legally responsible for preventing knotweed from spreading, with just around one in five (21%) aware that they could receive an ASBO if knotweed on their land is allowed to encroach into a neighbouring garden.

In fact, knotweed can now be completely removed within a matter of days, at any time of the year, using a digging out method that sifts the earth to remove all viable rhizomes from the infected soil. Once the problem has been swiftly tackled, and an insurance-backed guarantee has been secured, there are no difficulties in obtaining mortgage finance, including self-build mortgages.

Nic Seal, MD and Founder of Environet, comments: “People are right to be concerned about the threat posed by Japanese knotweed. Attempting to deal with it by cutting it down repeatedly, burning it, burying it or using common weed killers simply won’t work as the plant can lie dormant beneath the ground, only to strike again when people least expect it.

“Yet for those wishing to buy or sell a property or piece of land, it doesn’t have to be a deal breaker. Japanese knotweed can be dealt with once and for all, within a matter of days from discovery, so there is hope for self-builders who may have otherwise walked away from their dream site.”

Chartered Surveyor Philip Santo FRICS, Director at Philip Santo & Co, added: “RICS shares concerns that many people believe Japanese Knotweed poses a much greater risk than it really does. Since RICS issued guidance in 2012, the situation for buyers and sellers has greatly improved. For most affected properties there is now access to mortgage finance once an approved Japanese knotweed management plan is in place. DIY remedies can make matters worse and should not be attempted.”

Tweet
Rate this item
(0 votes)
Published in Contracts and Legalities
Tagged under
More in this category: « Steve Mansour at CRL explains how connected construction has helped the build process How long should new-build homes last? »
Login to post comments
back to top