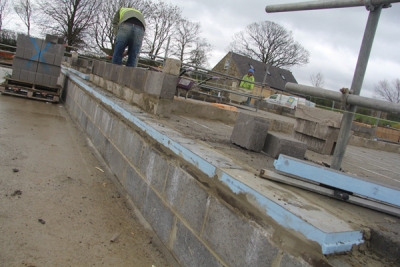 The five bedroom property has been built by Dobson Construction with a beam and block ground floor being supported off the in-situ concrete basement walls. The partially filled external wall of dense concrete blockwork, with an outer leaf of quarried stone, was then raised on the continuous course of Thermoblocks.

The 65mm x 215mm x 600mm Thermoblocks were supplied through a local stockist and have been laid on a mortar bed with the special Marmox Multibond adhesive being used to seal the stepped joints between the units.

The Site Manager for Dobson Construction recounted: “The use of the Thermoblocks was specified by our project architect to tackle the issue of perimeter heat loss, around the perimeter of the basement and also at ground floor level, on top of the concrete wall. Our bricklayers carried out the work, using the Marmox adhesive and the installation went without any problems whatsoever.”

As a loadbearing composite product Thermoblock has been developed to be incorporated into various wall constructions as a horizontal layer, equivalent to a course of bricks, in order to address a critical area of heat loss, thereby reducing energy bills and making a significant contribution to SAP (Standard Assessment Procedure) calculations.

Each length of Thermoblock is comprised of ultra-high performance XPS insulation, encapsulating miniature columns of concrete, while the top and bottom are covered by alkali resistant glass-fibre mesh, retaining a surface of fibre reinforced polymer concrete to facilitate bonding.

The concrete columns have a very low conductivity so do not present thermal bridges themselves, and when coupled with the highly insulating XPS insulation core, a combined thermal conductivity of 0.47W/mK is achieved.

Crucially, being able to employ a defined, very low thermal transmittance – derived by thermal modelling or measurement – offers a far more advantageous result than adopting the ‘default’ figure offered in SAP which can often result in non-compliance with Part L.