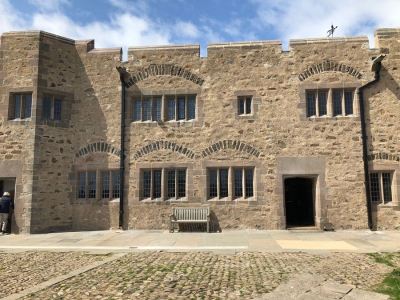 The history of Lindisfarne Castle

Lindisfarne Castle is one of the North East’s most well-known tourist attractions and is found on the Northumberland’s Holy Island. The castle was first built to provide defence from Scottish invaders and dates back to the 16th century. It was the subject of numerous alterations by Sir Edwin Lutyens in the early 20th century and is accessible via a causeway. The castle was originally built with stones from Lindisfarne Priory, which has fallen out of use and is located on the island’s highest point on a hill called Beblowe. Situated in the North Sea, the island was a target of Scots and Norsemen centuries ago. Today, the castle and island attract thousands of visitors each year and it has appeared in a host of film and TV productions, ranging from Cold Feet to The Scarlet Pimpernel.

Why Storm were chosen

Storm were chosen over a number of installers for reasons including their experience in renovating listed properties, including various National Trust buildings. At the start of the project, work was delayed due to various factors outside of the team’s control, including the notorious “Beast from the East”. However, substantial progress was made following a visit from Storm’s surveyor Oliver Parkes. Storm were first approached in autumn 2016 about the project, with the order eventually being placed this February, through the main contractor.

The team were instructed to replace an ageing secondary glazing system. As access to the relevant rooms was regularly required, a carefully-planned schedule was created so the work could be completed, with the team collaborating with DATIM Building Contractors to coordinate the timing. A discreet, slimline system was required by the architect due to the challenging conditions in the area.

Storm were asked to provide a semi-invisible system to protect the character of the building. Secondary glazing is used to reinforce primary windows and is housed on the room side of existing units. It can boost heat retention, security and sound reduction, usually coming with separate handles that enable you to open and clean primary windows. With secondary glazing, you can avoid needlessly removing historic, valuable older windows whilst protecting them and enhancing their functionality.

The snowstorms of March presented a string of challenges, including blocked routes and snow-crusted waves. Rather than cancelling or postponing the work, the team used shovels to remove the snow and ice and gain the access that they required.

Around five trips were made to the Castle, with Storm working around the schedule of the main contractor. Aside from the obstacles presented by the weather, there were no significant issues during the installation. Storm have described the project as “extremely enjoyable and rewarding” and are proud to have helped preserve the castle so it’s “superb setting and mystical charms” can continue to be admired.

Storm have been treating listed and historic buildings for over 15 years and are able to contribute to projects of all sizes. The West Midlands based family-run business offers a UK-wide service, with their base providing access to a range of major transport links. All secondary glazed units are manufactured by hand by in-house engineers, with historic primary windows of all shapes being replicated by the team. Storm aim to retain the character of all the buildings they work on and continuously develop their products by utilising their vast engineering experience and expertise.

A prestigious client base

The recent rise in conservation regulations has increased the need for secondary glazing. Storm’s clients frequently include high-profile companies and organisations including the National Trust, Historic Scotland and English Heritage. The surveyors at the company provide a free consultation service for clients across the country, with surveys providing a deep understanding of client requirements and enabling the team to select the most suitable and appropriate secondary glazing resources to support their clients’ primary windows and enable them to operate efficiently.

Surveyors are also tasked with installing the glazing, to provide continuity and build trust, with many clients returning to Storm repeatedly for further installation services. All team members are directly employed by Storm Windows, with their products only being available through the company. Every element of each assignment is dealt with by Storm, including customer service, surveying, production, and installation.

You can reach Storm Bespoke Secondary Glazing today by completing the contact form on the website or by calling 01384 636365. It’s also possible to reach Storm by sending a message to sales@stormwindows.co.uk.

More in this category: « Timber-look without the compromise Bring the outside in with Folding Doors 2 U »
Login to post comments
back to top