HomeFeaturesSustainable LivingMeeting the conditions for planning consent in a conservation area

Meeting the conditions for planning consent in a conservation area 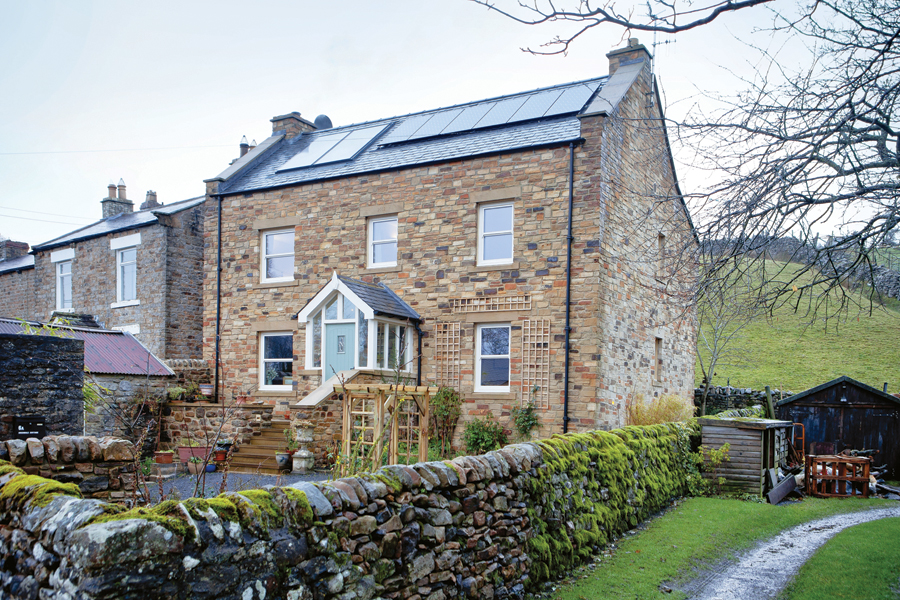 When Phil Newbold and his wife, Joy, decided to embark on building their own low-energy house in County Durham, obtaining planning consent in a Conservation Area and an Area of Outstanding Natural Beauty proved to be the biggest hurdle.

The couple sold their house in 2008 and started looking for a building plot to build their own low-energy house in County Durham. They found a plot in Upper Weardale in 2011 with what they thought was detailed planning consent. It turned out the planning consent had expired in 2009 so the vendor had to re-apply and was refused due to changes in the Council’s Environmental Policies.

Even though the foundations for the house were already cast on site, the vendor had to employ a Planning Consultant to renew the planning consent (with 15 conditions). Phil and Joy finally secured ownership of the plot in January 2012 for £70,000 and work started on site in March 2012.

The plot is 345m² and is the former walled garden of an adjacent property in a small hamlet of 18 houses near St John’s Chapel in Upper Weardale. The village is in a Conservation Area and an Area of Outstanding Natural Beauty on the River Wear.

When Phil opened discussions with Planning on the 15 planning conditions, he found the planners were fairly inflexible and not really interested in his aspirations to build a low-energy passive house. The Conservation Planning Officer in particular was not interested in the Government’s energy conservation agenda at all, just conservation of the local vernacular building style. Planning insisted on retaining the L-shaped floor plan of the original planning consent with random stone walls, natural slate roof and sliding sash windows.

Thanks to draconian planning restrictions, out went any hope of being able to build a Certified PassivHaus. Another planning application was required to retain and rebuild some existing outbuildings on the site and for the contentious addition of solar thermal and PV panels on the roof.

The house is a two-storey, detached house of 116m² (over two floors) with an additional non-habitable attic plant room and store (with limited headroom) of 46m². The L-shaped plan has maximum external dimensions of 10.8 x 8.2m. There is a small yard with outbuildings at the rear and a south-facing cottage garden and patio at the front. There is an existing stone double garage, outbuilding and a forecourt providing parking for two cars.

The ground floor comprises an open-plan dining hall and kitchen incorporating the stairs to the first floor, a separate lounge, a WC/cloakroom, a utility room and store cupboard. The first floor comprises a master bedroom, a study bedroom, a bathroom and WC, a guest bedroom with en-suite shower and WC and a linen cupboard. There is staircase access to the attic plant room and store which houses the 250L hot water tank, expansion vessels and the MVHR unit/air ducts.

The study houses Phil’s office from which he runs his Architectural Design & Project Management Company. Not only does the office enjoy very low-energy accommodation but the elimination of commuting makes his business sustainable in spite of the relatively isolated location.

The U-value of the timber-framed building fabric is 0.1, the windows are 0.9 and the air-tightness is 0.59 at 50 Pa. The couple have no central heating system apart from the woodburning boiler stove and the house is being maintained at 20°C. The Paul Novus 300 MVHR system is 94% efficient.

Work started on installing electricity and water service connections into the existing stone garage on the site in March 2012 plus a drainage connection to the main sewer. The couple moved to a small, rented cottage next door to the plot in April 2012. They had one sunny week in May during substructure blockwork and then it started raining. It never stopped raining (or snowing) for about 10 months and 2012 turned out to be the wettest summer for 100 years.

They cast the concrete floor slab over 450mm of EPS insulation in June. July was wet and was spent installing drains and services while waiting for the timber frame to be fabricated by a local company, Swift Timber Homes. The double stud walls, Posi-joist floors and I-beam roof were erected relatively quickly during August, in spite of the continuing wet weather and restricted site access. Swift Timber Homes also provided all the internal partition walls and staircases.

As the timber frame was erected, Phil inserted continuous Intello membrane with taped joints around the perimeter of the upper floors and roof in order to ensure good levels of air-tightness. Phil also installed any long, lateral MVHR ducts through the Posi-joist floors while the floors were being constructed. All the drain pipes and services penetrations through the floor slab and external walls were fitted with air-tight grommets including external lighting cables.

By September 2012 the roof structure was watertight but they just had holes where the doors and windows should be. Just as the October rains turned to snow in November, the Green Building Store (GBS) mock-sash, tilt & turn, triple-glazed windows and doors arrived from Lithuania, some weighing up to 70kg each. Phil applied special air-tightness tapes internally and weather-tightness tapes externally to all the frames before getting a local joiner to help him install the doors and windows in the prepared openings. They finally had a water-tight shell.

The same joiner helped Phil line the internal face of the timber frame with 90 8’ x 4’ sheets of Smartply 18mm OSB 3. Joy then taped the OSB joints with about 60 rolls of Tescon air-tightness tape using a heat-gun to dry the joints. Phil also taped the joint between the OSB and the ground floor slab and fitted grommets on any pipe or cable penetrations.

Phil then drilled nearly 300 100mm dia holes in the internal OSB lining for the Warmcel insulation to be injected into external wall and roof voids. The Warmcel insulation is a cellulose fibre made from recycled newspaper and was injected under pressure over three days. The holes were re-sealed with air-tight patches. This now resulted in a water-tight, insulated shell.

The Paul Novus 300 MVHR unit arrived from Germany (via GBS) in early December and was located in the attic plant room. The solar thermal panels and HW tank arrived on site and it took five men with long ropes to haul them up a long ladder onto the roof. The plumber was then able to install all the first fix plumbing, connecting up the woodburning boiler stove, hot water tank and solar panels.

Using local stone, the stonemason managed to get the external stonework up to the ground floor window cills before the first serious snow arrived in November. As the coldest and longest winter for 50 years followed the wettest summer, progress on the stonework almost ground to a halt, mainly due to low temperatures. Phil continued to install the MVHR ductwork through the Posi-joist floors, leaving space for drainage, plumbing and electrics. When all the air-tightness measures were complete, the blower door air-test gave a result of 0.59 (PassivHaus requires a reading below 0.6).

The internal OSB on the external walls and attic ceiling was lined with 50 x 38mm battens to create a 50mm services zone for pipes and wiring. After all the services had been installed, the void was filled with 50mm PUR insulation board before a final lining of 12.5mm plasterboard & skim was added.

A stone's throw away

The external stonework struggled to get up to first floor level by Christmas 2012 thanks to the continuing horrendous weather. Despite laying over 60 tons of type 1 stone over the area around the site, the house was surrounded by perma-mud, which paddled into the house. Rainwater harvesting is an eco-feature that is not necessary in this part of the world.

In the new year, the weather initially went from bad to worse but the stonemason managed to make some slow progress on the stonework in early January 2013 when a couple of weeks of mild weather arrived. They also managed to get the limestone flagstones ground floor finish laid and the walls and ceilings boarded and skimmed on the ground and first floors.

The second fix joinery work filled the house with sawdust and nails again while plastered walls and ceilings were being painted by Joy. Meanwhile Phil helped the joiner to install the Ikea kitchen units and the plumber and electrician to install sanitary ware, socket outlets and light fittings. Phil also started building the twinwall stove flue system through the floors up to the roof. The stonemason built a stone fireplace in the lounge using old stone during periods of bad weather.

The Woodfire F12, room-sealed woodburning stove in the lounge has a back boiler that provides up to 8.5kw to heat water in the winter and also heats towel rails in the bathrooms and a heat-leak radiator in the linen cupboard. Solar thermal panels provide most of the hot water in the summer, topped up with the immersion heater, assisted by the output from the solar PV panels.

The solar PV panels had been installed and working since December 2012 but Phil discovered that they could not get the FiT until they had an Energy Performance Certificate (EPC). They could not get an EPC until they had a completion certificate from the Building Control Officer. They could not get the BCO completion certificate until the stove flue, stonework, roof slates, electrics and rainwater goods were finished. This was finally achieved in October 2013 and the EPC confirms the primary energy use as 16 kWh/m²/year. The threshold for a certified PassivHaus is 15 kWh/m²/year.

Phil and Joy have managed to self-build the first Band A (SAP Energy Rating of 97) passive house in County Durham and have a warm, comfortable home in which to live and work without any significant heating bills. More importantly, they have proved that it is possible to build a real low-energy home/office in a Conservation Area and AONB which fits in with the local architecture while addressing fuel poverty issues head-on. In May 2014 the house won Best New Home at the Northern LABC Building Excellence Awards and was a finalist at the National Awards in London in November 2014.

More in this category: « Planning for the future A truly energy-efficient family home »
Login to post comments
back to top