Going back to her roots 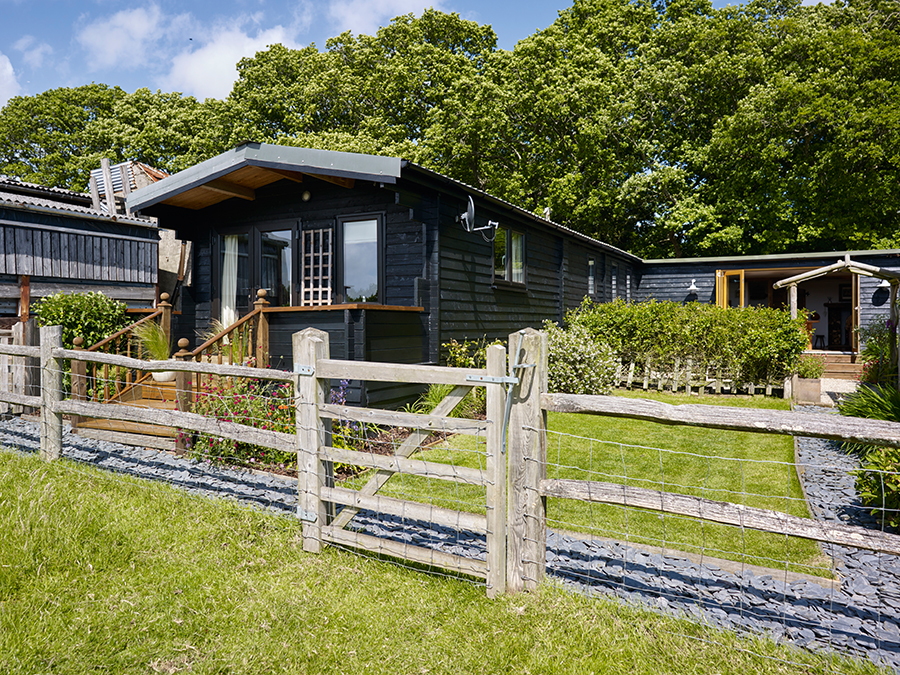 For Jude Hesselgrave, home is not just where her heart is, it’s also where her roots lie. After renting in London and then buying and renovating a house near Brighton with her partner, Roger Page, they rented their property out and made the move to Horam, East Sussex in 2009 to self-build on a plot of farmland that’s been in Jude’s family for three generations.

With a budget of just £60,000, the couple managed to create a characterful one-of-a-kind log cabin home through a series of extensions and home improvements over the course of six years.

The farm’s 400m2 dilapidated cattle and hay barn became the perfect spot for their ideal home, as it was close to water and near the sewage and electric facilities. Jude says: “The site where we chose to build was the barn that, as a child, I used to help my parents load the hay bales into on summer evenings. Over the years the building deteriorated and so we had no option but to pull what was left of the building down. Building the house on this footprint held great importance to me as it holds many memories and has huge sentimental value so we decided to put our skills and creativity to the test.”

The project began with them choosing two £7000 tongue and groove cabins with a basic, inexpensive structure which suited their pocket. This way, they could build it themselves but also dismantle it without many challenges if need be. With the help of a local company, they selected a design which allowed them to have more windows on the south side facing the garden, and patio doors on the west orientation, which lead to a veranda overlooking the fields.

With Jude keen for the challenge and Roger’s knowledge of construction, from owning his own construction company, Kane Building Contractors, they started their project by getting the site ready – pulling down the barn, levelling the site, building the foundations and then building the structures piece by piece, eventually making the buildings watertight. They used the smaller cabin as the living room and the larger one for the kitchen, bathroom and bedroom but, unfortunately, they soon realised that the space was too small. They then decided to continue the project by extending the cabin to create the second bedroom and cupboard and obtain a total of 124m2. In 2013, they extended again to create a living room perpendicular to the main cabin, which adds an element of privacy by enclosing the garden. The internal layout had to be reorganised too by turning the old living room into the bedroom and the bedroom into a breakfast room. A front door was added at this stage and so the breakfast room became the main entrance into the home.

There’s a real rustic presence throughout this home and most of the materials and furniture pieces were sourced by Jude from antique markets throughout the UK and France. The large 7ft dining table in the living room was lovingly created by her using old joists found in one of the barns on the farm, leftover from her father’s demolition days, before he became a farmer. Jude, who is a prop maker, stylist and who owns a wedding and events company called Mustard Events, looked after the home’s interior design. She explains: “I was very keen to carry a stylish, cosy, rustic feel throughout our home, it was important for it to be warm and welcoming. Once I’d painted the walls with soft Farrow and Ball colours it began to take shape.”

The living room is the only room constructed as a permanent structure, so this space was the most important to them when it came to the interior decoration. This structure features a separate timber-framed build with a sloping roof, which allows the extension to blend in with the existing roofline. The timber utilised came out of a 15th century house that Roger worked on and was used as the structural statement piece within the centre of the living area. Roger also made a ‘post box’ window on the higher end of a mustard-coloured wall to draw in south-facing light and add interest to the space.

Another interesting feature is the flooring. Floor boards were sourced from an old disused mill in Derby. Jude drove there with a van to collect them and then spent days cleaning and reconditioned them at home. Reclaimed oak found on site became the primary material for the fireplace framed by a mantelpiece.

The larger log cabin also accommodates the kitchen and the bathroom, which are positioned next to each other for drainage purposes and are separated by a stud wall. As the space was compact, Jude thought of additional clever storage solutions such as creating a spice shelf above the window and adding a shelf for the cookbooks above the door.

The project slowly evolved as more budget became available, so they upgraded the bathroom in 2014 with wall insulation and new sanitaryware and added double glazed windows the following year. They also replaced a cast iron roll-top bath with an acrylic bath to preserve the water’s temperatures for a longer period.

Although the house is heated with the help of a Franco Belge red woodburning stove, sourced from eBay, and a handful of storage heaters, Jude and Roger also had to buy additional PVC windows and doors which help improve the insulation. These are black on the outside and don’t look like plastic, which is a great advantage. The cabin expands and shrinks depending on the season so it’s important to make sure that the windows and doors are flexible and fit properly. In addition, even if the budget might be an issue, Jude advises people who want to opt for the same route to invest in the right skin thickness of the cabins – this helps insulate by keeping the cold out and the heat in.

In September 2015, Jude and Roger were granted a Certificate of Lawful Development, allowing them to call the log cabin their permanent home. Its current value is estimated at around £250,000 but the couple have no intention of selling. They’re currently reaping the benefits of their hard work.

They’re both ecstatic with the results and have enjoyed every minute of the build process, even though they went through some harsh winters which delayed the project. Jude concludes: “It’s changed our lives beyond our expectations but for me particularly, living on the family farm where my grandparents lived for many years holds huge importance. I work from home as my event venue is here, I also maintain and manage the farm, Roger works locally in Lewes and the surrounding areas, so it’s very convenient for him. We both feel very lucky and not a day goes by without us appreciating this wonderful bespoke home and the lovely surroundings it sits within.

“Even now there’s something very special about walking into each room knowing it’s something you’ve lovingly created from nothing. ”

More in this category: « Reinstated grandeur Thinking outside of the box »
Login to post comments
back to top