What is SuDS compliance? 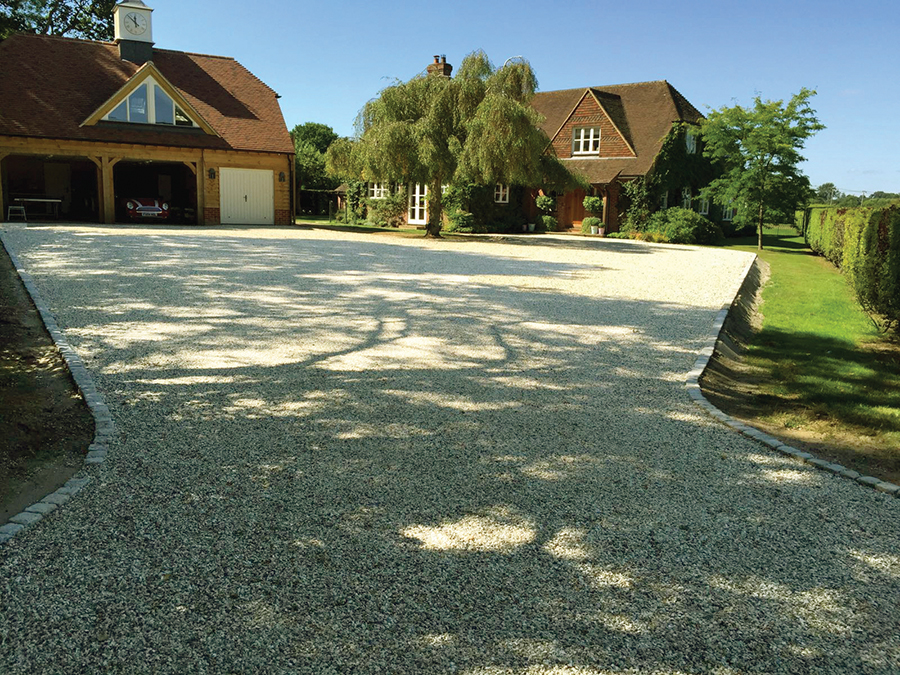 SuDS stands for sustainable drainage systems; it’s an initiative developed by the Government to stop surface water run-off from domestic properties becoming a burden on the national drainage network, making each home responsible for the run-off from their land. If you do not choose a porous SuDS-compliant surface for your garden, you will need to apply for planning permission to surface the area.

The easiest way to achieve SuDS compliance is to surface your driveway or patio with a porous system; this means both the top surface (wearing course) and sub-base need to be capable of allowing water to pass through them into the soil directly below.

Years of hard surfacing, directing rainfall into plastic pipes and sewers has highlighted the effects of starving the land of its natural water supply, and studies have shown the detrimental effect this is having on nature’s balance.

Apart from relieving the burden on the national network, the SuDS concept of allowing water to permeate the ground helps to maintain the natural ecosystems that rely on the thousands of underground streams and aquifers that exist below ground and feed into the many lakes and rivers across much of the country.

This ecosystem forms a vital part of the natural environment, starting a food chain that culminates in our own produce – it’s not just about the local council not wanting to foot the bill for the overloaded drainage system, it’s in everyone’s interest to make SuDS compliance a standard practice. So how do you begin?

How to create a SuDS-compliant base

A SuDS-compliant base should have no dust in it – in fact, no particles smaller than 2mm. As long as your sub-base is well confined by a perimeter edging it will compact sufficiently to provide support for your intended traffic load.

Porous concrete paving is usually in the form of block paving; these blocks have to be laid on a bedding layer of 2 to 6mm clean grit rather than sand to be SuDS compliant, they have a wider gap between the blocks which is also filled with the grit to allow water to flow through.

Porous macadam is a specially formulated mix that allows the passage of water through the tarmac, this can be laid over the same porous sub-base.

Resin bound surfaces also need to be laid over a porous sub-base to be SuDS compliant. The resin would have to be laid extremely thick to go straight over the sub-base and be strong enough to cope with vehicle traffic, so as it’s a more expensive option, the structural or bedding layer beneath the resin should be porous macadam or a gravel stabiliser grid filled flush with a standard gravel. These materials placed below the resin will provide the strength to cope with heavy loads whilst allowing the water to flow through freely, allowing the resin to be laid at a shallower depth. Macadam is a good choice when access is easy as there is lots of heavy machinery required. Gravel stabiliser is a much easier install and provides enough support for domestic driveway traffic. It’s perfect for pathways and patios as it’s so much easier to install and requires only light compaction equipment to lay.

Gravel stabilisers are a great choice if you want a good usable surface without the traditional problems associated with gravel. They will keep your gravel in its place creating a firm surface underfoot allowing pedestrian and vehicle traffic without the gravel shifting around.

Loose gravel is a traditional choice, but has many disadvantages and will require ongoing maintenance, so over the long term has very little cost advantages over a gravel stabiliser. This system provides the least initial outlay, but when weighed up against the ongoing maintenance and lack of performance, it’s probably best avoided.

If you’re looking for a subtle appearance, grass reinforcement driveways or parking spaces are a great choice, they build upon the same sub-base as all of the previous options but give the appearance of a lawn and, if constructed properly, will provide years of use.

So, to conclude, SuDS isn’t such a pain after all! As well as saving yourself the hassle of obtaining planning permission for your driveways or hardstandings, you will also be helping the planet and maintaining the natural ecosystem.

More in this category: « Power of possibilities with 2019 kitchen trends Can a safe and secure garage still be stylish and fit in with your self-build design? »
Login to post comments
back to top