On the waterfont: Riverside home transformation 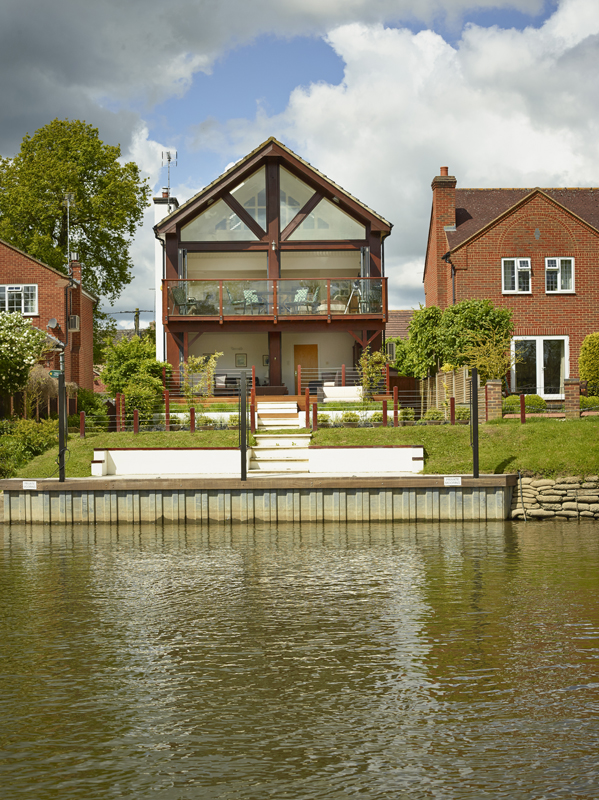 A three-year renovation project has transformed a new build property into an open-plan home that makes the most of its riverside views.

When Kevin and Sandra Brown bought this ten-year-old Purley on Thames property in 2011 they felt it had great potential.

Kevin explains: “It was a lovely house to begin with, but it wasn’t living up to its full potential. We had always thought of taking on a renovation project, but I suppose we found the reality a little daunting. This project worked for us because the home was in a livable condition and had ample space for us to reside in it whilst work was taking place. This gave us the opportunity to really make the space our own, but at our own pace.”

Because Kevin is semi-retired, he was able to project manage whilst working part time. The couple didn’t have a preconceived idea of how they wanted their new home to look, so spent weekends visiting shops to get a feel for their style preferences and then surfed the internet to source products that matched this.

Taking in the view

One of the first jobs was to renovate the very top floor featuring the master bedroom. This mezannine level sits within the pitched roof and is situated back from the large windows that look out onto the river. This allows for a double height ceiling in the first floor main living space, which benefits from extensive glazing across the entire front wall right up into the building’s apex.

The mezannine level’s safety was originally secured with a single balustrade. However, this presented an obstacle, as the couple wanted to preserve the stunning view onto the river without letting the sunlight compromise a restful night’s sleep. The solution was to turn the balustrade into a full wall to maintain the view, along with bespoke plantation shutters to block out sunlight when needed. Other considerable tasks for this floor included fitting bespoke storage, creating a dressing room, extending the en suite and adding an air conditioning system to help with ventilation.

The first floor’s renovation has created an open-plan space that includes kitchen, dining room and living space. Two sets of bespoke aluminium bi-folding doors open onto a large balcony overlooking the river. The doors open up fully and connect to a gable window, allowing for maximum natural light to flood into the home.

Kevin continues: “I knew I wanted bi-folds because of the space they offer. I was drawn to the functionality and how you can open up and transform an entire space. The kitchen didn’t need much work, but we’ve put in a breakfast bar that neatly separates the kitchen and dining space.”

The original bathroom on the ground floor was large, but looked more like team changing room than family bathroom. It has been transformed into a sophisticated space with modern fittings and neutral decor.

The lounge on the ground floor was the last room to be refurbished. Two sets of bi-folding doors replace original chunky wooden sliding doors, looking out onto the river exactly as those on the first floor. The doors are powdercoated in anthracite grey to complement the dark, wooden beams in the house, but also to fade into the interior’s background. These create a seamless link between living room and front garden, removing boundaries between inside and outside. The extensive addition of glazing leads the eye right down to the riverfront, which now acts as the home’s focal feature.

Kevin and Sandra were so impressed with the bi-folding doors that they went back to the same company, Origin, to specify matching windows for the entire property. The company also supplied electric roller blinds that fit the bi-folding doors as well as reducing heat build-up in the summer and heat loss in the winter.

Outside, the front garden has been completely redeveloped thanks to a garden designer. More decking has been added and the mooring has been updated. The back of the property now has a large parking space and new double garage.

Because they were under no time restrictions, Kevin and Sandra were able to be flexible with their specification and consequently the project’s budget. During the renovation the couple’s vision for their new home evolved, leading to further works that they hadn’t originally allowed for.

Kevin explains: “For us, it was a question of doing one project at a time – we came to jobs when we were ready to do them. When we looked around the property we knew that there were lots of things we both wanted and needed to do. My first budget of £78k wasn’t based on anything other than a finger in the air estimate. In reality the total project has cost over double that.

“I think everything was just a lot more expensive than I anticipated. For example, I budgeted about £4.5k for the front garden in total ignorance and ended up spending £25k! Another factor was that I often opted for higher spec and decided to add extras throughout the project – for example the air conditioning unit wasn’t in the original budget. The thing is that we didn’t let the original budget constrain us and we were fortunate enough to allow for extra costs.”

The couple ended up spending £55k on tasks not originally accounted for. These included new windows throughout, a new poured kitchen floor, the bathroom and lounge refurbishment, replacing the back steps and adding a bespoke storage space under the stairs.

Kevin continues: “I guess it isn’t as bad as it seems! These were jobs that we thought we might do at some point in the future, it just so happened that we got all the other bits done and were in the fortunate position of being able to bring extras forward. But this is it now – we’re finished! We love our new house and I don’t think we could find anything better – no more budgeting!

“Our approach was that we weren’t doing this to sell it on in the future – we have chosen things for us because we want to live in this house for the rest of our lives and that’s why we haven’t let the budget dictate the project. I think any renovator or home-builder has got to fully understand the reason behind the project. If you’re doing it because you want it to be your house then you will have a different approach to if you want to sell in a few years. For example, we have gone with what we like rather than what’s on-trend and we haven’t scrimped on quality because we are going to be here for a long time.”

More in this category: Hackney haven: Victorian terraced home undergoes a full refurb »
Login to post comments
back to top