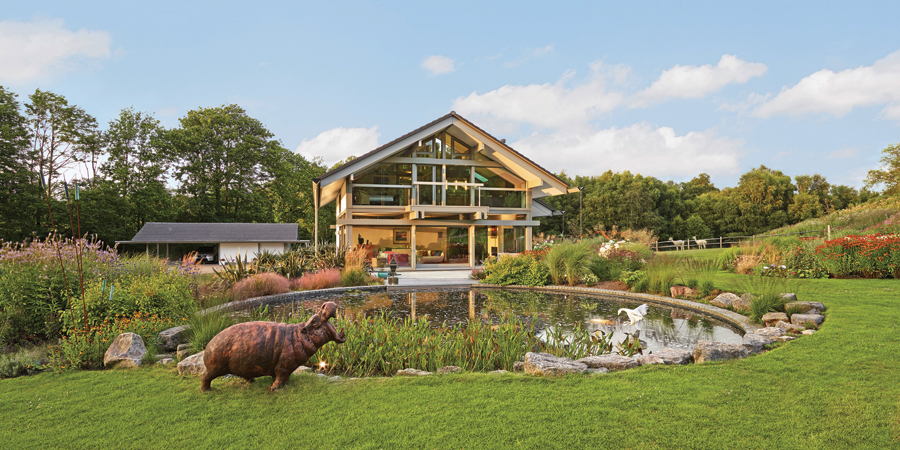 After 25 years of living in their large Edwardian semi-detached property in Woking, Lynn Paynter, a Marketing Consultant and her husband David, an Artist and Poet, decided it was time to embark on their long-held, self-build dream. Working with HUF HAUS, the pioneer of bespoke, pre-manufactured homes, based in Germany, the couple set about designing and building their dream house in Haslemere, Sussex.

Lynn explains: “As empty nesters, David and I had begun to feel like we were rattling around in our large Edwardian semi. We adored the property, but after all that time, we were erring towards a change.

“Out of the blue, we saw a house advertised in the local paper, and were both instantly struck by it. It was ultra-modern, eco-friendly, made entirely of glass and wood, and was a HUF house. Neither of us had ever considered that we would like such modernity, so it was quite a surprise when we both fell in love with the concept. We made the decision quickly – our self-build journey would commence with HUF HAUS, and we set the wheels in motion.”

“The thought of a clean slate to build a home to our own specifications appealed to us,” commented David. “We are also at a point in our lives where we have more flexibility, especially with our children having left home – so it felt like the right time. Our previous home was an Edwardian property which was draughty and difficult to insulate – we were wasting a lot of energy trying to keep it warm. We wanted an environmentally-friendly home in the countryside that was built in a sustainable way.”

“We sold our little cottage in Devon and, after the tribulations of a sluggish market, eventually sold our house in Woking,” continues Lynn. “Our search for a development site began in earnest. We scoured West Sussex, West Surrey and Hampshire, to no avail. We did come across a large site with planning permission in place for a large HUF house, but the price was high, so we ruled it out of the equation early on,” explains Lynn.

David continues: “The plot had been for sale for some time, but at a price beyond our budget. We knew it would be a perfect spot for a HUF house with floor-to-ceiling triple glazing (being surrounded by woods and not being overlooked), plus there had been a planning application for a large HUF house on the site previously. Eventually, as the recession at the time made money hard to come by for developers, and having already sold our house, putting us in funds, we were able to acquire the site at a reasonable price.”

“Unfortunately, the bank had repossessed the site from the developer, but for us, the stars began to align,” adds Lynn.

She continues: “We visited the site and it was ideal; it was home to an old derelict bungalow, but surrounded on three sides by National Trust woodland. We made an offer, which was rejected, but we reviewed our finances and upped the price. In early June, our offer was accepted, and we moved ahead with the legal process post-haste. By the end of the month, we officially owned the parcel of land, and the fun really began.

“Peter Huf – the Lead Architect at HUF HAUS in the UK – provided the architectural designs, and worked with us to understand what we wanted and how the house would occupy the plot. The planning process was fairly easy to navigate as there had been permission for development on the site previously.”

David adds: “Peter has a wealth of experience in helping people with the design of their home. We spent a lot of time considering what we wanted the house to give us and how it would serve our personal needs for the foreseeable future and as there had been a previous (albeit expired) plan accepted for a large HUF house on the site, before we’d bought it, we were able to clear the planning obstacles within a couple of months, once the bat and tree surveys were completed and a landscape plan submitted. HUF have an in-house planning consultant to help with this aspect.”

“Work commenced with the demolition of the bungalow, and by May a pit was excavated to receive 700m of pipework, which would provide the infrastructure for our ground source heat pump. In June, HUF HAUS arrived with a team of German workers to begin the construction of the house, starting with the basement,” explains Lynn.

David adds: “We have a gently sloping site which allowed us to consider a basement – something with which HUF have much experience. I am a Sculptor, so we needed a studio space for my work. Lynn, and I each wanted a study; otherwise we specified a guest suite to be in the basement and our bedroom suite to be on the first floor, with the main living rooms in between.”

Lynn continues: “The construction process was fascinating and a display of German efficiency – and accuracy – at its finest. They even brought over their own crane and driver! This was used to swing into place the pre-manufactured walls, complete with plumbing, wiring and glazing, which all arrived on articulated lorries, after a long road trip across Europe from Germany.

“Within five days, the second floor was complete, and the roof began to go on. The whole process was executed by crane – we were fascinated to find that they didn’t use scaffolding. By day seven, the roof tiles went on, complete with photovoltaic panels, and the building was weatherproof. At this point, all attention was focused on the interior fit-out, which began with the pouring of cement screed on all floors and concealing the underfloor heating pipes.

“We moved into Whitehanger on 9th November 2011 – less than 18 months after completing the purchase of the site. We had some immediate landscaping to do, such as turfing the basement lawn to help with water absorption ahead of the winter months, and then by March of the following year, we turned our attentions to the garden.”

“The landscaping was intimidating at first,” admits David. “We had a 6.5 acre site that was derelict and needed a total overhaul. Once the house was built we were looking out of our wonderful floor-to-ceiling triple glazing in all directions and saw the need for landscaping on a grand scale (for us).

“We started from the house, with some massive rocks (approximately one tonne each) to build retaining walls to the sides of the basement. Limestone patios were then laid around the other three sides of the house and then we looked outwards. First, we had to fence off the domestic curtilage from the paddock, and fence one boundary for security purposes. We wanted a pond and a swimming pool. The pool came first – a French design – a lapping pool of 12 x 3m with an even depth of 1.3m; mainly for Lynn, who is a keen swimmer. We added a patio seating/sunbathing area. We then installed a greenhouse and some raised beds for vegetables. We planted a wildflower meadow, which attracts the bees and butterflies but has not as yet produced many flowers.

“We initially employed a garden designer to give us a plan for the garden around the house. We decided we wanted perennial planting and for it to be as low-maintenance as possible. The first phase of this was to the west of the house and included perennial beds and a 10m pond. Once we knew more about the plants we liked, we felt confident that we could design the rest ourselves. We added a Japanese garden to the east of the house, taking plant ideas from Kew Gardens.

“We share the garden with wildlife, which was a particular challenge at first, as the deer and rabbits would enjoy a free lunch whenever we planted it. So a very expensive deer fence has now been added to the entire boundary! All but the occasional small muntjac are now restricted to the National Trust woodland which borders three sides of our garden.

“Our own three acres or so of chestnut woods were choked with holly, which took a few months to remove. We added a 350m circular woodland walk, which means we can now enjoy a stroll around our own woodland. We are attempting to plant some woodland natives, but the local rabbit population seems determined to stop this at every turn. So we are mainly planting evergreen shrubs that they don’t like.

We have also now added a large rockery, which took 40 tonnes of Purbeck rock from a quarry in Swanage. The latest project was to add three more flower beds – a conifer bed, an azalea bed and a heather bed. The rest of the garden is laid to lawn, which is large enough to require a tractor mower.

“Following initial advice from the garden designer, who was a good plantsman, we now have learnt enough to make our own mistakes. Lynn has become an enthusiastic gardener with a natural aptitude for organisation, so all the planting is documented and allows us to see what works and what doesn’t. We open the garden for groups of visitors as part of the National Garden Scheme so we also learn from the experiences many of them bring.

“We have many compliments from visitors when they see our garden and the setting of the house. Delivery men are frequently heard to say, ‘This is my favourite place to deliver,’ so we think we have the right formula, but a garden is an ever-moving thing and we are constantly thinking and planting and weeding and composting and dreaming up the next project.”

Lynn concludes: “We are now into our sixth year of living in our HUF house, and we couldn’t be happier. It’s wonderful to enjoy the fruits of our labour and to have realised our dream. We love having visitors who share in the enjoyment of our home, which we now share with a host of alpacas, cats and chickens, and we look forward to many more years here.”

More in this category: « Joe Stuart talks i-build through the process of creating his compact new-build Robert Dunn has created an energy-efficient holiday home property that has been constructed using over 500 bales of straw »
Login to post comments
back to top