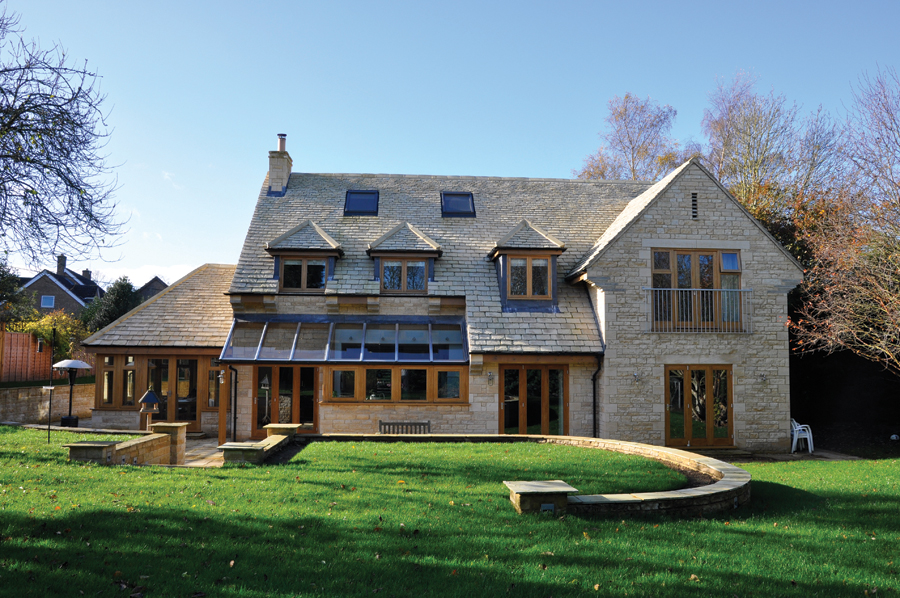 A property is very much a legacy and many of us are just custodians, but the opportunity to self-build or custom build remains the ultimate goal for many brave pioneers. They are faced with firstly finding a suitable plot, then the even more daunting task of the proverbial blank canvas on design. This is further complicated by the myriad of building product choices from roof tiles to bath taps. Stamford Stone explains more.

Faced with such a challenging prospect, the first port of call should be an architect who has a well-trodden track record in custom builds. When Mr and Mrs Harrison were able to purchase the building plot for Garden House, literally at the end of their existing back garden in Rutland Water, they engaged Thomas Wilson Architects of Rutland who were not only relatively local but also had a very impressive portfolio of quality bespoke houses.

Architects not only have the knowledge of Building Regulations, which seem to change on a daily basis, but they can also advise on the most appropriate materials on both a technical and, of course, aesthetic basis. Many people approach the material choice from very different angles wishing to scrimp on the outside and blow the budget on a 'to die for' kitchen. In all honestly, the average self-builder would find it difficult to get excited by roof tiles, bricks or window frames but this is the fabric of the building and are, in almost all cases, a 'once in a lifetime choice'. Choosing the wrong building materials will have repercussions throughout the whole of the building's lifecycle. Whilst it may be possible to rip out a kitchen, making changes to the building's structure is far more complicated.

A cheap brick chosen in haste can only be covered up with either render or cladding, both of which can be very expensive and may not suit the styles of local buildings. Not only will these choices blight the 'kerb appeal' of the property, but can also make a vast difference to the value of your finished investment. Whilst very few self-builders carry out the project for financial gain it would be very disappointing to find that the eventual market value might be less than your expenditure. This, of course, is especially important where the finances may be raised against the finished project's value.

Given that the Garden House's location is in an area known for its landscape, the choice of materials was heavily influenced by the natural surroundings. For many centuries, Lincolnshire Limestone has been quarried locally and all of the notable public and civic buildings would have contained either Clipsham Limestone or some of the local variations within the Mid-Lincoln Cliff, this being the Oolitic Stone Cliff running from Grantham almost up to the Humber.

The Clipsham Limestone quarried from the Upper Lincolnshire Stone Formation has been widely used further afield from one of its most ancient projects, Windsor Castle in the 14th century, via King's College, Cambridge, to the 2013 award-winning Edward King Chapel at Ripon College Cuddesdon in Oxfordshire.

The Clipsham Limestone from The Stamford Stone Company has been used sympathetically by the architects to give a building which is both warm in its appearance and its performance. The solid stone blocks give a vision of solidity and permanence which cannot be achieved with any other material, including stone cladding. The precision cutting by the quarry provides the juxtaposition between uniformity in shape without each piece being identical. The blocks are very much individual in their shade and appearance and will weather and mellow in a relatively short while.

Martin Wilson of Thomas Wilson Architects has balanced the building very well by matching up the proportions of the large stone pieces by complementing the stonework with chunky oak joinery. Not only do these bespoke pieces provide architectural features in their own right, they will also, like the stone, mellow with age and accentuate the 'natural' look of the building. Whilst nothing in the history of British building would be more traditional than Limestone and English Oak, the materials have been given a contemporary edge which still requires the highest level of artisan craftsmanship from both the carpenter and the stonemason.

Garden House features over 400m² of Clipsham Limestone used for the walling, heads, cills and dressings. The stone hasn't just been restricted to the house, but has overflowed into the garden paving and walling enabling the house to sit very comfortably within both of its local and natural surroundings.

Very few of us have the opportunity to commission a handmade work of art for display in our lounge but Mr and Mrs Harrison achieved this with a hand-carved solid stone fireplace from The Stamford Stone Company in a complementary Ancaster Limestone. This type of stone has a very close pore structure making it ideal for hand-carving and the fine detail has been crafted with precision by the artisans at Stamford Stone. This unique bespoke piece of stonework is no more expensive than a top of the range mass produced fireplace but it remains a truly individual showpiece which has been specifically designed so that it is in proportion to the location, room size and the wood burner. One of the benefits of working with a traditional family company has been the level of personal input from the client and Stamford Stone allowing both parties to sit around the table and design a fireplace that incorporates all of the client's design aspirations to form a truly unique piece of artwork.

The finished house has not been without its trials and tribulations along the way and considering the journey took around three years, it is testament to the teamwork of all concerned that the client, the architects and the building contractors remain on the best of terms and are all, quite rightly, very proud of their contribution in building not just a house, but a legacy.

Thomas Wilson Architects can add Garden House to their expanding portfolio of projects in partnership with The Stamford Stone Company which has now reached double figures in less than five years.

More in this category: « Take in stunning vistas from a luxury balcony feature How to build your home using reclaimed materials »
Login to post comments
back to top