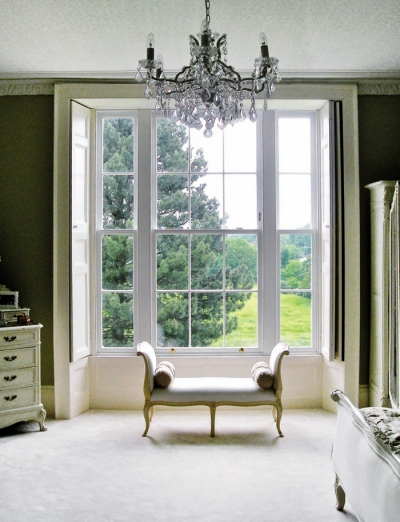 Made-to-order timber windows by specialist manufacturer Lomax + Wood have been architecturally specified for an extensive refurbishment project in rural Gloucestershire.

The property has been extended several times since the original cottage was constructed and is thought to date back to 1740. The south face to the adjoining property is most likely to have been added in the early 19th century and the north face several decades later. The current homeowners bought the property just three years ago knowing that some work would be required but very quickly decided to remodel the building shortly after moving in. Architect Tom Futcher, 105West Architects Limited, Bristol, worked closely with the couple to create a grand Georgian-style property of significant proportions.

“I’m not sure my clients realised the extent of the work we were taking on,” says Futcher, “the property was described as being tired but in truth it was quite exhausted.” The house was completely stripped out down to the bare fabric of the building, plumbing and electrics replaced, and the roof and windows removed. The existing timber windows, the result of staged works over a long period of time, afforded no symmetry in the exterior aesthetics. Of different sizes and designs the single glazed windows were leaky and draughty and the timber was rotten and past repair. Internally, the room layout was inconvenient with little natural flow and although the property was large it was decided to add a further two-storey extension.

“We were introduced to 105West Architects by friends,” says the homeowner, “and we soon learned to value Tom’s judgement and advice. Part of the extensive work involved the repositioning of window openings to bring some order and discipline to our Georgian-style vision.” That said, the quirky arrangement of the casements in the original cottage building was allowed to remain.

The replacement windows designed by Lomax + Wood (formerly Ambass-A-Door) were made to bespoke sizes and some 26 large, Georgian-style double glazed sliding box sash windows from the Kensington & Chelsea collection were produced. Recreating the authentic details and historic sightlines of a period window, when combined with modern manufacturing methods, has provided 21st century standards of acoustic and thermal performance that fully meet current Part L Building Regulations.

“We are delighted with our large windows which play a major role in every room,” confirms the homeowner. “They fully meet our expectations, are beautifully weighted and operate with ease. We have no regrets in the decisions we made and we love the results following 20 months of considerable effort and investment. Although we do not live in a conservation area and the house is surprisingly not listed, we have been told that the planners would have been delighted with what we have achieved.”