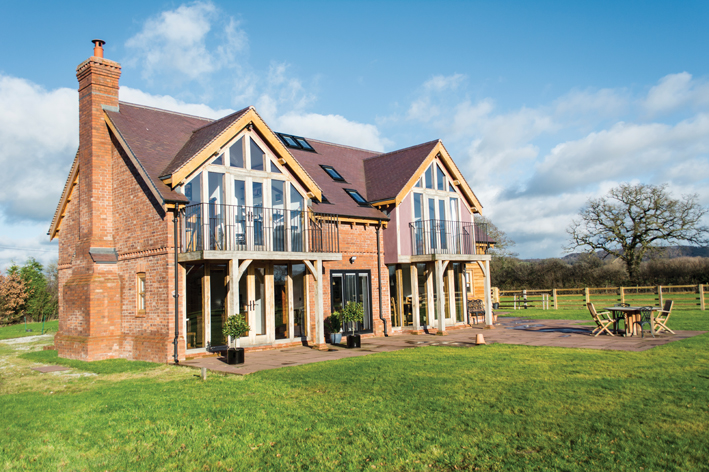 Simon wanted to create a stylish and individual family home that blended into rural surroundings and was efficient to run. The important thing to him was that all the details of his new home should be chosen as a result of personal research rather than as a result of someone else’s choice or recommendation.

“As a Chartered Building Surveyor I have always been interested in the development of house design, construction and particularly energy efficiency,” explains Simon. “My main inspiration for the build was to explore the limits of energy-efficient design through traditional building methods with a view to imminent regulation changes, proposed carbon neutral building and more modern methods of construction.”

Simon chose the large five-acre plot in South Cheshire because of its quiet location and space – which the family’s horses and car collection required much of! “The site was a complete contrast to our former home, which was an old Courthouse on a busy main road.” However, the proposed size became difficult to manage, as Simon continues: “My wife and I had some difficulty balancing the house and outbuilding facilities design, resulting in endless sketches, drawings and models, and ultimately several planning applications to downsize the property.”

Significant time was also spent plotting the exact movements of the sun on site, through all seasons, to optimise the passive solar design and establish the best location for outbuildings. This principle of utilising truly free energy with no middle man or machine is based on simple physics, with the added benefits of reduced running costs and no difficult or expensive maintenance. The only down side was that projects such as this always take longer than expected, in this case around four years! However, the project remained within budget and was completed with no unexpected costs thanks to the well-planned design.

In order to maintain the rural streetscene it was decided to adopt a traditional design for the frontage and add a contemporary feel, albeit in traditional materials, to the private rear elevation. The traditional masonry construction was designed for super-insulation levels with dense, solid internal walls and tiled floors for thermal mass. The two-storey fully glazed oak frames allow good solar gain, sheltered with balconies to prevent over-heating. However, this aspect required significant consideration to allow for the inevitable shrinkage of the oak within the masonry envelope. Concealed steelwork was added to facilitate the large openings in the superstructure.

As the house is sited in an exposed position the external appearance was important and needed to reflect the traditional rural surroundings so Green Oak frames, clay roof tiles and Furness bricks were chosen together with local features such as Flemish brick bonding and dog tooth banding details.

“Internally, we felt it important that these features were continued and remained prominent throughout,” Simon explains. “A detailed examination of ‘renewable energy’ options revealed many disappointing features that suggested they may not be as economic to run as claimed and with the absence of documented case studies and proof of manufacturers claims, an alternative approach was taken based on simpler, more basic principles. Part of the original vision was always to use extensive glazing to bring external spaces and views into the property and this idea steered the design towards Passive means of energy efficiency rather than other so-called renewable energy sources.

“The sun is the ultimate energy source and the established principles of thermal mass storage of heat and hot air rising promoted a passive solar gain and ventilation design along the lines of established Passive House principles and Passive Stack ventilation designs. Fortunately, I was in a good position to determine how best to achieve these aims and countless SAP calculations were completed to fine tune the balance of established technology and passive elements. These suggested that very little heat input was required due to the extensive solar gain and insulation levels, so a conventional LPG fired boiler was installed with underfloor heating on the ground floor and radiators on the first floor with comprehensive whole system, weather compensating, dual zone controls and individual room stats on the ground floor for ultimate control.”

Although Simon initially intended to have minimal involvement in the actual build, the most complex elements of the design required him to take full project management and main contractor responsibilities. “I enjoyed completing many of the finer construction details myself,” he continues. “I decided to build without an NHBC Buildmark warranty as their inspectors seemed unable to understand or cope with factors affecting Green Oak. Being a qualified Chartered Building Surveyor and Energy Assessor I had already produced a fully specified and detailed design and my more involved role in the build ultimately inspired me to set up my own design company, SAKdesign.”

The Kettles' new home is called Hillcrest. Within a small group of houses on the outskirts of this South Cheshire villiage, the property is completely private. On its approach, via narrow country lanes, the house is mostly obscured until you are adjacent to it. It enjoys an open aspect to the rear, looking over the horses’ paddocks. The house is accessed via a traditional oak framed porch leading to the entrance hall atrium at the core of the house. This leads to a living room, open-plan kitchen/ dining area, utility room and wet room. A galleried landing then leads to a large master bedroom – complete with en-suite and dressing room – three further bedrooms and a family bathroom. The final selection of outbuildings includes a triple garage with hay loft, two stables, a tack room and log cabin.

“In terms of materials selection, we looked primarily at quality, taking a long term view of performance and the suitability of each material for the surroundings,” explains Simon. “A good example was the selection of Furness Brick who provided a hardy brick in a blend appropriate to our location. We also gave serious consideration to sustainability issues and sourced much of the oak locally. We used a variety of Fakro roof windows to maximise natural lighting and encourage solar gain and opted for conservation style units to the front aspect in order to enhance the traditional cottage style. The ridge unit provided our passive ventilation control and has eight windows in combination, electrically operated with the support of an external rain sensor and the added benefit of self-cleaning glass.

“The lengthy design process and investigation of renewable energy sources not surprisingly revealed the simplest principles of energy efficiency to be the most important, i.e install as much insulation as possible to retain whatever heat is produced and take maximum advantage of passive features. Products such as heat pumps and whole house ventilation are too reliant on their use of electricity and it is an acknowledged fact that they are seldom designed or installed to achieve true efficiency. However, it is an established fact that development without a recognised renewable energy source severely restricts performance measured through a SAP rating or The Code for Sustainable Homes and it concerned me that a solely passive approach would not receive the recognition it perhaps deserved. This was confirmed by my discussions with The Energy Saving Trust who agreed with my findings but confirmed that heat pumps and the like are “the best technology we have”. I felt this was a rather blinkered approach and insufficient attention to passive solar and thermal mass design with passive heat distribution and ventilation. It only encouraged my approach to maximise the efficiency of traditional building methods and the nomination of my development as a finalist in the ‘Best Technological Innovation’ and ‘Best Sustainable Development’ sections of the Local Authority Building Excellence Awards has ultimately reassured me that there is some merit in this theory.”

The passive ventilation aspects were understandably extremely challenging owing to an absence of established design information, standardised procedures or effective modelling to confirm its effectiveness. However, the principle that hot air rises cannot be disputed and every effort was made to assist the free flow of air within the airtight property. All rooms are linked from the central atrium (passive stack) where the automatic roof windows at ridge level allow complete exchange and input of fresh air for the whole house. Surprisingly, the design of the green oak frames encountered similar difficulties as there is little established process for calculating their engineering and loadbearing aspects particularly in relation to locally sourced timber. However, in both respects Simon was allowed significant dispensation from Building Regulations by working closely with the Local Authority Building Control Department to substantiate his theories.

Although still a work in progress, the self-build blends well with the landscape and is often mistaken for an old cottage. “For me, that is the ultimate complement,” concludes Simon. “As many people enquire about the age of the property or how it was converted it has become apparent that we have succeeded in achieving our aims. In contrast to current fashions to super-size and stand out from the crowd the proportions of our house are adequate rather than oversized with simple, subtle and interesting features. However, the biggest compliment has been from my wife who described it as ‘the ultimate dream house’.

“My favourite aspects include the light and views from inside the property afforded by the extensive glazing and the warmth of winter sun. The light gives a feeling of natural space but even so, as a designer there are a few things I would have done differently. I would certainly make any future design and choice of features a little less complex, to avoid over expectation from contractors and manufacturers.

“My advice to future self-builders is to plan everything in detail before you start to avoid unnecessary costs and frustrations of last minute redesigns. It will not be as cost-effective to self-manage as you might think and the employment of appropriately experienced professionals is vital to the success of any project. While there is a variety of choice for such ‘experts’ it is important to consider all aspects of the design at every stage and that is where the Chartered Building Surveyor excels, with experience of design, engineering, estimating, legislation and of course construction. But of course I would say that!

“Would we do the whole thing again? My wife says NO but we designers are never happy so it’s only a matter of time…”

More in this category: « A new generation of country house Labour of Love »
Login to post comments
back to top