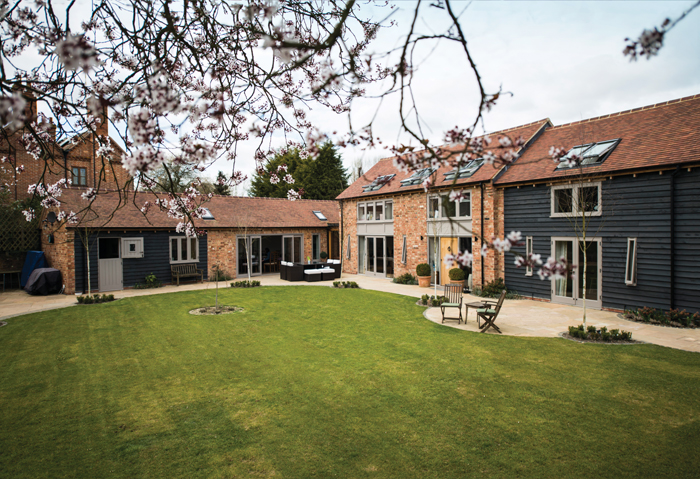 Mark and Abigail Smyth bought a barn conversion with the view to renovate, but when the extent of its neglect became apparent, they decided to knock it down and self-build in its place.

We initially saw the property in a local estate agents but dismissed it because the house looked odd,” explains Abigail. “We eventually decided to visit and as soon as I arrived I had an overwhelming sense that this was what we had been looking for, purely because of the location! It’s the perfect plot – the end of a no through lane, close to the centre of the village, a five-mile reservoir just across the field with a sailing club, not overlooked and only a few miles from where we lived previously – everything about it is ideal.”

“This was the best site we had seen in 10 years of looking for a project,” adds Mark. “The vision was to reconvert the old barn and stable that existed on the site together with a sizeable extension. However, as we started the work the reality of the poor structural state of the old buildings became apparent.”

The barn and stable originally belonged to the large farmhouse next door. The previous owners converted the buildings, but had done a terribly bad job. By the time the Smyths came to plan its renovation, the property was in an exceptionally bad structural condition. There was no insulation, it had a stream running beneath the old floor and you could actually push walls over with one hand!

“When we realised we would need to knock the building down the price wasn’t right,” continues Abigail. “Mark struggled with the practical technicalities of how we would make it work, but I kept saying that it was the right location for us. Eventually we thought of it in terms of buying a plot of land with services and a building already on it and that made us look at it differently. We knew it was the right thing and that, between us, we would make it work.”

After a complete redesign of their plan, the couple re-sent the project’s planning application to the local authority planning department, changing their project from renovation to self-build. They spent a lot of time getting to know people in the village to consult plans with their soon-to-be neighbours, because, as Abigail explained: “it would be awful to live somewhere where you’ve had an argument with or offended someone who lives next door! Engaging with everybody was the best way to do it.”

Abigail and Mark involved an architect up to the point of building control, but decided to take on project managing their build. They also undertook a huge amount of the physical labour themselves, which started by taking the whole original structure down by hand due to a possibility of bats living in the barn – although, typically, it turned out there weren’t any!

The self-build design has been constrained by the original building shape, as it sits close to the same footprint. Alongside the original plan to extend the footprint, the Smyths have paid homage to the original barn by incorporating similar features within the new design. Building regulations wouldn’t allow the new home to rise above the ridge height of the old building, which resulted in a lowering of the site.

Mark worked hard to tie down the eco status of the future building early on in the process, wanting to build a highly efficient home, but faced a number of associated challenges on his dream-home journey.

“We were using lots of new methods unfamiliar to the local building control, including a breathable membrane roof, full-fill insulation, mechanical ventilation heat recovery (MVHR) and heat pump,” explains Mark. “Additionally, we wanted to use a rainwater harvesting tank but scrapped that when we couldn’t get alleviation from our regional water authority to run the overflow into the local drains. This was because the local soil is clay and a soak away wouldn’t have worked in the worst of the rainy weather with the probability of the tank becoming contaminated!”

Abigail comments further: “The problem was that nobody in this country seemed to really understand MVHR, especially with the added complications of a non-standard shaped home. We had quotes from over 15 different suppliers which all ranged enormously in price, so in the end Mark had to do the research in order to completely understand the system himself. The company we went with wanted to charge £3000 to fit the system, so Mark simply asked how it was done, realised it was a very simple job, decided to do it himself and saved us all that money! It only took him a day and a half, plus – having photographed everything he installed – we have the added benefit of knowing exactly where everything is, which will save us time if anything ever goes wrong.”

As the build went on the couple became increasingly trade-savvy. Continuous problems with workmen not turning up led to the Smyths employing three sets of tradesmen for any one job, with the first arriving on-site being given the work. Abigail found aesthetic bargains at high-end supplier factories and Mark became especially canny at negotiating prices and sourcing unique elements – one of which was the exposed bricks that separate the one-and-a-half-storey and single-storey areas of the home, taken from a local factory that was knocked down during the build. They were also able to reuse the bricks from the original barn, which sit proudly as the exterior garden-facing wall.

The finished property is a 3000ft2 timber frame building with very high levels of insulation. Reclaimed Warwickshire red bricks and a clay tile roof help the home to merge neatly into its 1.2-acre site and quintessentially English surroundings, where it sits in between an old farmhouse and white thatched cottage. Dark grey timber cladding complements the light grey door and window frames. The property makes the most of its encompassing vista with extensive glazing and the half-storey first floor is flooded with natural light through low-level and roof-light windows.

Bi-folding glass doors lead from the patio into the dining zone and bespoke kitchen, made by a local specialist. Abigail chose an on-trend grey base colour that flows throughout the exterior and interior of their home, creating unity between the contrasting areas. She spent a long time researching colour and products and created scrapbooks and moodboards made of magazine and catalogue cuttings.

Beyond the kitchen is a utility space, with plenteous storage in the same style as the kitchen. This leads onto a large rear courtyard that the family are pleased to have as an opportunity for further development. On the opposite end of the dining area is a bathroom and children’s playroom that Abigail has grand plans for, including an interior balcony and fun snug!

A large barn-style sliding door reveals an open plan study/living area with its own 2m² flat panel rooflight, patio doors and full-length windows. Oak continues to make a statement with exposed beams on the ceiling and surrounding the fireplace. Beyond a traditional hall area is a large guest room with en-suite and patio doors. There is a blissful sense of flow and continuity throughout the open-plan ground floor, where Abigail and Mark’s two little girls take great joy in skating the length of their new home.

The bespoke staircase was crafted by the same local expert that created the kitchen, with Mark installing the glass balustrades himself. Upstairs is the master bedroom and en-suite, two children’s bedrooms and a traditional family bathroom.

The upstairs really does benefit from the numerous windows, both in terms of natural light and views over the extensive garden. The low-level windows have been transformed into window seats in the girls’ rooms, where they often sit and do their homework whilst still being seen by Abigail from the kitchen. “Brightness was always our biggest concern,” continues Abigail. “The previous building was really dingy so we worked hard to incorporate as many windows as was possible. Everyone who comes in comments on how bright and lovely it is and the girls love showing off their rooms to friends!”

It’s Abigail’s small details and finishing touches that really impact on perfecting the property: “I picked up little tricks from collating my scrapbooks, such as placing a slate stone in the courtyard paving that acts as a front-door matt. We did really think everything through thoroughly and did a lot of research for all aspects of the build. I was conscious that I’d seen a lot of self-build projects run out of budget and consequently skimp on the finishing touches – which are of course the things that visitors will notice! I was determined not be in that position. I sourced everything from sales. I would buy key items to use as a feature and work around it – for example, Fired Earth tiles with a high-end bath tap is coupled with a standard set in a bespoke frame: one complements the other.”

“We are truly amazed at the impact of the site now as it’s much more open-plan,” Mark delights. “We love everything about it. I think my favourite thing is the peace and quiet that it brings – and ultimately being able to relax again as a self-build project really takes over your life. Looking back, I wouldn’t do anything differently, but we have learnt so much about the building industry and ourselves through the process. I would love to do another project, but I doubt we’ll ever sell this one. My advice is never be put off by the challenge of a self-build and never take a tradesman’s word or indeed price as non-negotiable!”

Mark recently conducted a talk at the NSBRC and and aims to continue to share his learning experiences from this inspirational build.

More in this category: « Great expectations Close to home »
Login to post comments
back to top