A new generation of country house 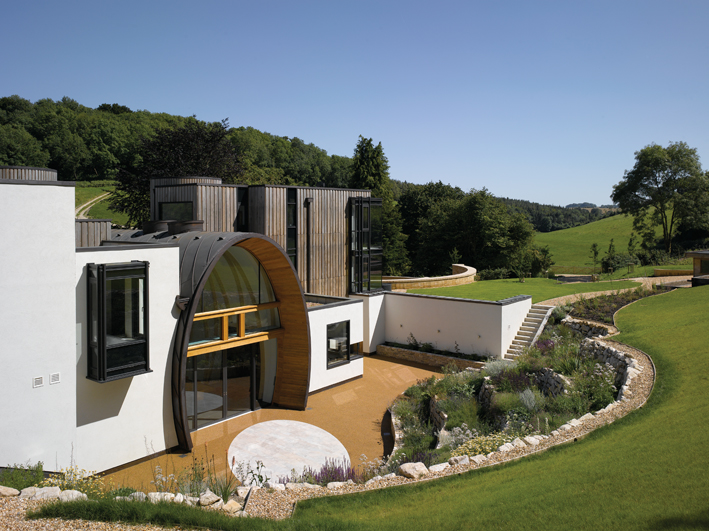 A romantic ruin was the foundation for an inspirational country home that pays homage to its exquisite surroundings.

Christopher Taee and his young family were looking to find a new home, but weren’t inspired by any properties on the market. “The notion of being able to build something from scratch became very appealing,” explains Chris. Having spent months looking for the right plot, when he visited a hidden valley in the middle of the South Downs National Park he instantly fell in love: “The first time I arrived at the site I closed the car door and heard something very unusual… absolutely nothing! It is an extraordinary site that is tranquil and beautiful.” The site housed the ruins of a farmhouse, where all that remained was one ivy-covered wall and an undiscovered well.

The family ran an informal design competition to choose the right architect and design to create their new family home. “We knew that the location needed natural materials, it deserved interesting organic shapes. We knew it wasn’t traditional, but we didn’t want sugar cube harsh modernism either. We wanted the house to flow, and not be obvious,” continues Chris. The brief requested tranquil yet playful spaces using local natural textures and contrasts in a home that made use of the exquisite vista. The winning design was by Andrew Birds from Birds Portchmouth Russum Architects, who put together a ten page pictorial storybook that explained his vision for the site. “It was one of those ‘oh wow’ moments when we looked through it. We were particularly challenged with the thought train that they put into motion” enthused Chris.

Downley House is located in a fold of the Ditcham Park estate, an Area of Outstanding Natural Beauty, now designated as The South Downs National Park, and therefore a sensitive and inclusive approach to the design was adopted. The winning design incorporated the ruined wall, making it a prominent feature, blending with the design. The structure sits behind the wall, sinking into the natural incline of the landscape. The wall acts as a kind of shield between the modern property and its landscape. It transforms the new structure and connects it with the English country house heritage.

A previous proposal to refurbish and extend the existing ruin was granted planning approval in June 2007 and the new house is of similar size and height to the earlier approval but set further back from the ruin. Following consultation with East Hampshire District Council, The South Downs National Park and Buriton Parish Council, the final application was submitted in March 2010 and permission was granted in May 2010.

There were no major setbacks to the programme meaning that the Taee family were able to move into their new home by Christmas the following year, with all outstanding work completed by the following summer.

Chris was assisted by project managers and a site manager to organise procurement and managed the construction process himself. Chris also maintained close control over the building budget, taking on the role of main contractor and effectively seeking appropriately competitive subcontracts. Having worked in property investment for years, Chris had a strong sense of where he wanted to take the project and took a two-year sabbatical to give it his full attention. He took a personal approach to management, prioritising the quality of craftsmanship over the speed of construction. He encouraged builders and craftsmen to ‘take ownership’ of their work and to be proud of their ideas and skills, creating a non-conflictual atmosphere where all energies were directed towards efficiently creating an extremely high quality home. As a result the project was very cost effective and was completed to the overall budget of £2.5 million. Chris found the experience so enjoyable that he’s keen to take on the same role with other luxury projects.

The detail formed from skilled craftmanship is what binds the beauty of Downley House together. The house is divided into two wings, one for the family and one for guests, as the family were keen to separate the spaces. The wings are linked by a 25 ft high foudre barrel inspired dining hall at the heart of the architectural promenade, which is aligned on the ruin entrance and has fully opening glazing connecting the inner entrance court to an informal south facing sunken terrace. Two cylindrical towers containing the entrance hall and primary spine-like staircase are placed symmetrically either side of the foudre.

The design is in the genre of English country houses enjoying an unfolding sequence of spaces and views and composed of simple geometric forms nestling within the landscape. Without the backdrop the design could seem industrial, but in this scenery the structure appears as a contemporary play on castle-like design, where its curves become organic and a functioning part of its local eco-system. A promenade is established which reveals changing experiences of the arcadian surroundings: It commences at the circular arrival court, extends via an oak pergola through the inner garden court, in which the ruin stands as a romantic verdant folly where plant life is allowed to make its impression, to the cylindrical entrance hall. The internal circulation flows from the entrance hall and guest wing stair along the entrance façade and across the dining hall to connect with a further staircase. This leads to the roof garden which enjoys a panoramic view of the valley and bridges to the hillside to complete the promenade into the landscape.

Downley house has made a unique design contribution in the South Downs, generating positive interest within the local community including hosting an educational day for Ditcham Park School pupils to learn about the environmental and ecological technologies used.

More in this category: Great expectations »
Login to post comments
back to top