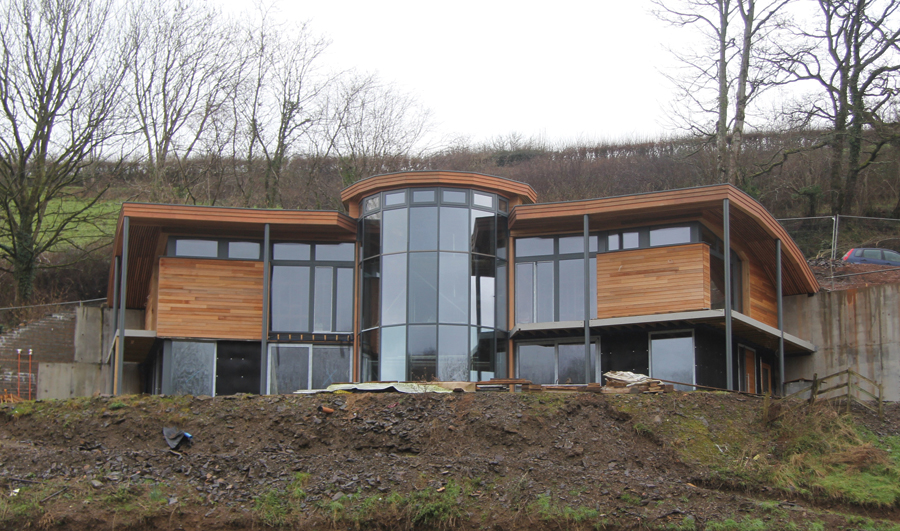 With less than 400 PassivHaus certified properties so far completed across the UK, the ultra-low energy standard from Germany can still be viewed as nascent in this country, though there are many compliant components and technologies available to assist in these designs, such as the mechanical ventilation and heat recovery system offered by Omnie.

The highly efficient PassivHaus certified CA550 heat recover unit (HRU) has in fact just been installed as a crucial element to the building services within a private residential property under construction near Tiverton in Devon. The two-storey, 200m² structure replaces an earlier dwelling on the Bampton site where Gale & Snowden is the specialist architectural consultant and PassivHaus designer responsible for the specification process.

In addition to the ducted central ventilation system, which will constantly harvest warmth from extracted stale air, the new home uses a holistic set of measures in order to keep energy usage within the tightly controlled PassivHaus parameters. These include a super-insulated building envelope, use of thermal mass to mitigate extremes of temperature and standards of airtightness so exacting as to restrict air changes to below 0.6 per hour.

The latter figure, set by the PassivHaus Institute, is so low that it would lead to problems of stale, moisture laden air becoming trapped in the living spaces, with the possibility of it causing condensation, damp and damage to the fabric of the building or even “sick building syndrome” which adversely affects the health of the occupants.

The Devon self-builder, Hugh, commented: “Sherwood has been built on the site of a former bungalow and has been designed by the architects, Gale & Snowden, to be our forever home – with the scope for us to live on the ground floor if our health deteriorates in later life. We chose the PassivHaus low energy route in order to keep future bills as low as possible, while also utilising materials and products, which would offer a healthy living environment.

“Gale & Snowden identified the HRU as being the most appropriate, low energy model on the market for our needs and the fact that Omnie is an Exeter-based company also fitted with our ethos of trying to buy local. While the HRU and the two manifolds and ducting have been installed by the Go Green Engineering of Exeter.”

In fact the semi-rigid ductwork is an integral part of the Omnie system and enables good flow characteristics to be maintained while routing the pipes around the structure to different rooms. The reduced number of fittings also assists in preventing air leakage.

The CA550 HRU itself is designed to run continuously at a cost of approximately 30p per day, depending on the tariff and is extremely quiet in operation as well as offering such sophistications as automatic summer bypass and a boost facility for when humidity levels increase.

Overall the Omnie CA550 HRU is 92% efficient making it fully compliant with SAP, as well as able to feature in a near-to-zero energy house design such as has been created by Hugh and his wife along with their consultants.

This advanced ventilation solution is also a key component to Omnie’s whole house offering which can also feature renewable energy in the form of ground and air source heat pumps, a wide selection of underfloor heating systems with sophisticated control options.