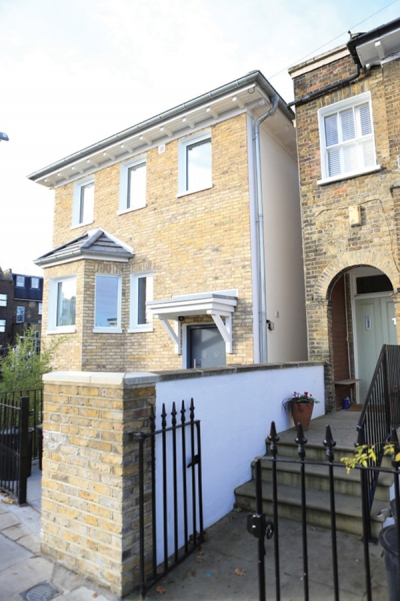 A beautiful contemporary and highly efficient three-storey house in Putney, London, is home to Matt and Jo Warnes and their six-year old daughter. Friends and family of Matt may remember many a BBQ on the very plot that this house now sits on – which was previously his mum’s vegetable plot.

Built in January 2013 – but fitting seamlessly with the neighbouring end-of-terrace properties – you may think, on first glance that this house had been there perpetually.

With inspiration from many magazines, Matt and Jo researched different self-build companies – whilst having a strong vision of the modern, Scandinavian, clean living interior they aspired to. Due to the plot being in a conservation area, the couple knew the house would have to look like the other Victorian brick houses on the terrace from the outside. The search was narrowed down to two possible pre-manufacturers – both holding the ability to build the house they dreamed of, in terms of a bespoke design, but Hanse Haus could fulfil requirements for brick slips on the exterior rather than straightforward render which was a planning requirement.

In August 2011 the couple resubmitted for planning however there was objection from neighbours worried about the noise and disruption that may be caused. The application went to committee and after four months they came back to Matt and Jo with a thumbs up – along with 13 conditions of planning.

The planning and logistics of the project required a careful and thoughtful approach as well as a creative and skilled architect.

Working closely with their Hanse Haus Architect, Bianca Keil, the couple were fully involved with the design making models of the house from foam and cardboard – which helped conceptualise what the couple were trying to achieve. Changes made along the way included moving the boiler and turning the staircase around.

The couple now have the family home they have always dreamed of. Matt states: “In many ways, it’s a modest house but it’s a high-performance house too – with a traditional guise. Unlike many new builds we don’t have a long list of renewable hardware – no solar panels, no heat recovery, no rainwater harvesting – but the airtight building envelope, along with the insulation and triple-glazed windows has proved incredibly effective meaning we really don’t need them.

"Bearing in mind we get our fair share of cold, wet and windy weather and we are situated right next to a busy railway line, the house feels consistently warm yet with fresh, with clean air and without the need for much heating through the winter months. In fact, our total energy bills (gas and electricity) for the first year was £850 and to offer some comparison, my mum’s traditionally built house, right next door – which is marginally bigger in size – is costing a hefty £4000 a year to run. With our energy bills likely to increase by around 10% year-on-year, we’ll be looking at an £80-£90 hike in costs whilst hers will be more. She has already asked if we want to swap homes!”

More in this category: « Building the future with Weberhaus Timber-framed, sustainable and energy efficient homes from WeberHaus »
Login to post comments
back to top