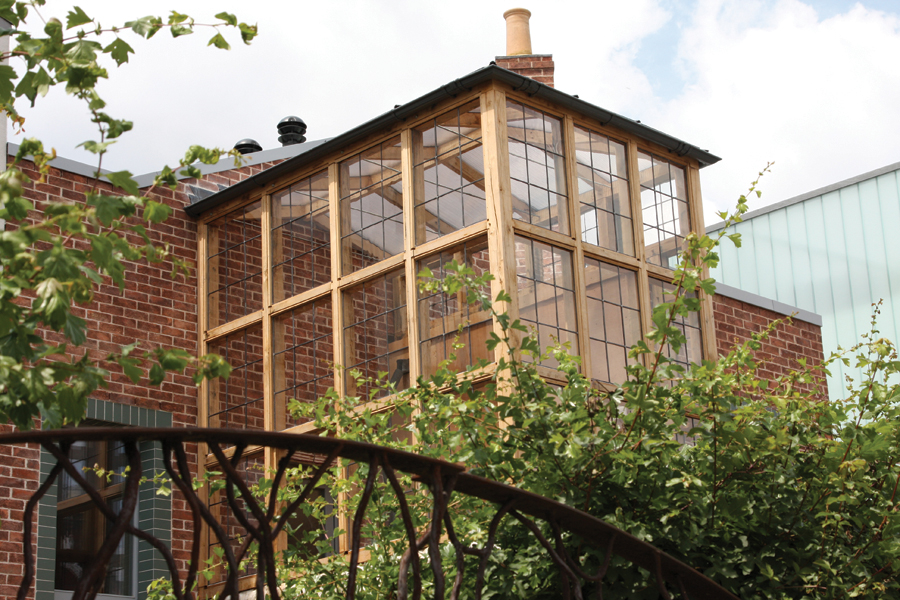 Every issue we follow Will Anderson as his self-build journey unfolds. This month he celebrates the disappearance of his scaffold.

We bade a final farewell to our scaffolders this month. They first arrived nearly a year ago when our timber frame got beyond the ground floor. Thanks to a harsh party wall award, we had to work fast with this scaffold, getting the frame up, the roof on, the windows and doors in and most of the brickwork complete in a mere fourteen weeks. When this scaffold came down – and we no longer had to pay weekly fees to either the scaffolders or our neighbours – everything slowed down.

The scaffolders came back in February when we started building the porch and conservatory at the front of the house. These two rooms are key to the look of the house, but were built last because they are outside the insulated envelope of the building and so not part of the timber frame. The porch is built of solid brick and the conservatory is a traditional construction of green oak and leaded windows.

Fortunately the scaffold for this part of the build stood entirely on our own land, so no more money was lost over the fence. We did, however, go well over our three month contract with our scaffolders, mainly because the conservatory took much longer to finish than planned. Making all the windows by hand was not on the original schedule but – as they had to be installed into rebates on the outside of the oak frame – it was obvious that we would be in trouble trying to put them in once the scaffold had gone.

Now that the scaffold has come down, we can stand back and admire the building for the first time. There is still an ugly plastic skirt hanging off the conservatory to protect the bricks and mortar below from the natural oils that leach from green oak. Nonetheless it’s looking good. Our Arts and Crafts focus on traditional, high-quality materials has paid off. The beautifully variegated hand-made bricks from Northcot Bricks, laid using blue-white lime mortar form Mike Wye & Associates, bring real character to the building and are the perfect foil for the oak conservatory. Although the leaded windows of the conservatory took ages to make, their delicacy is a striking contrast to the chunkiness of the oak. I’m also pleased with tiling detail round the windows, not least because I did all this tiling myself and more than once I wondered if it would be worth the considerable effort.

So now all I have to do is fit out the inside. Hah! Unfortunately this task is now almost entirely down to me, not least because there are few unspent lines left on my budget. But that’s okay; I always intended to try my hand at as many building crafts as possible and plenty of opportunities await me. With the scaffold down, I feel newly energised, which is a good thing as I’m going to need all the energy I can get as the months roll by.

More in this category: « Glass craft A fine flooring finish for Will Anderson's self-build »
Login to post comments
back to top