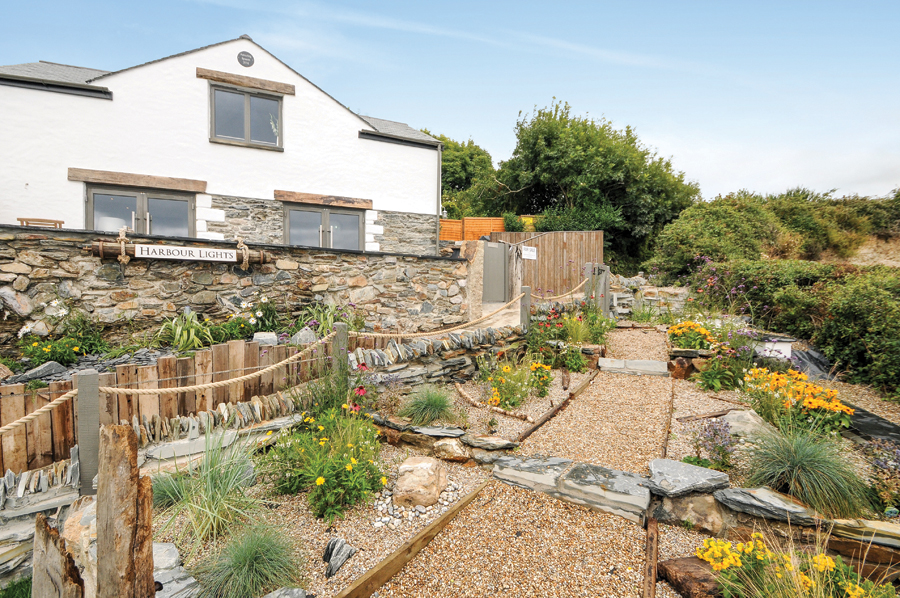 With a shared passion for restoring properties to their former glory, Charlotte Thomson and Joey Auger couldn’t have imagined embarking on a more unconventional project – converting a public convenience into a coastal retreat.

Charlotte and Joey are no strangers to renovating properties. When the couple lived in Portsmouth it was not unusual for the pair to be buying and ‘doing up’ homes. Some they would sell and others they would keep on for their Lovers Retreats business – a portfolio of high-end and secluded luxury holiday homes for couples to rent. When personal circumstances brought them back to Cornwall where Charlotte grew up, it was Joey who found their next venture – Harbour Lights!

“I blame Joey for that one,” enthuses Charlotte. “I like to do things ‘out of the box’ , but he likes to take things one step further. He was the one that spotted the property and after a few drawings on paper napkins, I was there with him picturing what could be. The location is just out of this world; a real gem. We would have kicked ourselves not to give it a go.”

As soon as the couple purchased the disused toilet block from auction house Clive Emson, the media went into a state of frenzy, as Charlotte recalls: “The media interest was phenomenal and the story hit the local, national and worldwide news within hours. Newspapers were tweeting about it, as were Clive Emson, so I knew we’d done something either a) wonderful, or b) stupid!”

Following such an immense reception, Charlotte got in touch with George Clarke who immediately gave the project his seal of approval – filming for the TV show Amazing Spaces started almost straight away.

Being in a conservation area, planning permission took a rather lengthy nine months. The pair were very limited in terms of the design – even down to the smallest details in the garden. “We did apply for a balcony and a few other ‘wow’ factors which would have been amazing to incorporate, but due to the precious nature of the location we were limited unfortunately, and everything had to be in keeping with the local area,” comments Charlotte. “Looking back though, we are grateful this was the case, as it prevents buildings that look out of place popping up everywhere.”

Of course, the process of restoring this spectacular landmark didn’t come without its challenges. Joey explains: “We kept as much as we could of the old building, but once the roof was taken off the walls moved about 80mm. This meant we had to then fit a concrete ring beam for support. A lot of the walls when stripped back were a mismatch of concrete block, brick and original stone, so we had to repair and render some areas. Luckily the two front walls we were able to restore and the original stone is now showing.”

As well as the original walls, the couple felt it only right to keep the existing two doors which used to be for the ‘gents’ and ‘ladies’. Charlotte enthuses: “We thought this was slightly humourous, as well as practical of course!”

While Joey managed the finer details of the project – such as liaising with the structural engineer, working out how things were going to be done and what materials were needed to achieve that – Charlotte handled the costings and took care of the administration aspect of the project. She explains: “We were both hands on working physically on the project all day, every day, and then coming back to do the paperwork and ordering etc, so it was definitely testing at times.”

The couple initially employed a local architect firm, but soon realised this was the wrong decision. “Joey and I are both fortunate to have vision, imagination and I suppose you can say ‘design minds’‚" says Charlotte, “so for us it wasn’t necessary to pay someone to do what we could do ourselves. We realised this and so continued with the design and build completely ourselves. However, we did instruct a structural engineer to help with the technical drawings, but other than that, the design was 100% down to us.”

Due to the location of the project, the couple had to be extremely careful with the materials that were selected. Charlotte and Joey found that anything metal had to be marine grade stainless steel so that it didn’t rust. As a result, this put a big cost onto their budget. Charlotte explains further: “We wanted to keep a coastal, nautical theme throughout, without being too cliché, and so have incorporated a lot of natural materials such as reclaimed wood, driftwood, slate, granite etc.

“We’ve purchased antique portholes and restored them with old rope and antique wooden cladding for the walls. We’ve really gone to town with the little details as we truly believe that they can transform an average property into something really special. Everything had to be done to the highest specification and quality as the building deserved it. Being ‘born’ in 1771, it was the biggest makeover the building was ever likely to go through, so it needed to be special.”

Reflecting on the finished masterpiece, Charlotte exclaims: “This outstanding and intriguing conversion is exceptional in every respect.”

The ground floor is an open-plan living area with a wetroom comprising a shower, WC and basin with a beach pebble floor. The skilful use of individually-sourced ancient reclaimed timbers enhance the walls and the room focuses on the stunning views, as well as a quality concrete Stovax log burner on a slate hearth installed in one corner. The kitchen has Dekton worktops (scratch and heat-resistant) with inset kidney-shaped ceramic hob and chandelier extraction above. A built-in fridge freezer completes this bijoux corner.

Upstairs is a large double bedroom with a designer bath at the bottom of the bed, and the most glorious views over the harbour and Charlestown Bay. There is also another room which could be used as a small double bedroom, study or possibly nursery. The room enjoys a view over the garden area. An en-suite has been fitted with white Italian marble worktops, which look beautiful against the dark grey and stainless steel fittings.

Next to the en-suite is a utility area/walk-in wardrobe with bespoke fitted storage, a water heater and washer dryer. Heating wise, the house has been fitted with underfloor heating throughout, in addition to the electric towel heater in both bathrooms. A Sonos sound system has been installed with three independent zones, one downstairs, one upstairs and one in the garden area. All external windows and doors have been fitted with bespoke marine grade stainless steel handles and hinges.

Charlotte explains: “For such specialist items, such as the bath, the bed, the kitchen etc, we knew what we had in mind – coastal, luxurious, boutique and unique – so it was quite difficult to find all this within our budget. Luckily for us, a few chosen firms offered us a bit of help budget wise, due to the project being so prominent and in the public eye, which was amazing for us. I don’t think there’s anything I’ve had to really compromise on to be honest, so the house is glowing with the highest quality furnishings and fittings.”

Charlotte continues: “There were two products in particular that we couldn’t recommend enough to those who are also taking on their own conversion. For those renovating an old property, damp is an issue, so we used KA Tanking slurry in all areas which has been a godsend. Elsewhere, the final finish had to be immaculate and high-end, so we chose an absolutely amazing paint called Zinsser for both the internal and external areas. They are (as far as we are aware) the only company to guarantee the durability, longevity and colour of their product for six years, so that was a no-brainer for us – especially when renovating a property in line for all sorts of attacks from the wind, sea and salt air.”

Amazingly, the project took a total of seven months. In spite of several problems that were encountered at the beginning of the project, the couple only overran their schedule by four days. Charlotte reveals: “You’ll be shocked to hear we are selling it, not moving in! We have fallen in love with the building, and of course Charlestown itself, which is simply charming. But we have found another project on the north coast that needs our undivided attention.”

For Joey and Charlotte, the project is everything they hoped it would be and more. Thanks to the luxury little extras such as the Stovax wood burner and the silver heritage bath, they have given the property that sought-after ‘wow’ factor – and the couple are both still smiling!

Charlotte concludes: “My advice to anyone taking on a self-build or conversion would be: if you’re doing it as a couple, don’t even think about it if you aren’t close and strong, as it can be very testing at times, stressful, tiring and really hard work. It is so rewarding at the end, but there are always a few tears and tantrums along the way. Secondly, don’t always stick to the plan. Things change, people change, ideas change, and that’s ok. A lot of the time, we just had to go with what the building deserved and needed, which was often different to the original plan. That isn’t always a bad thing – it’s way more fun to be spontaneous sometimes.”