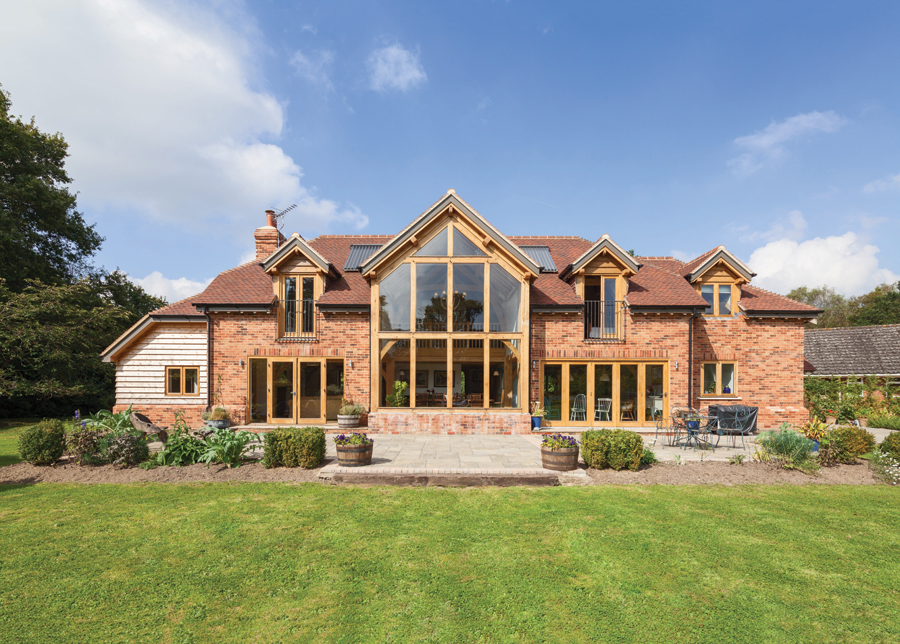 When a 1970s bungalow with two acres of land came up for sale in the picturesque village of Pirbright, Surrey, Mike and Jenny Hobbs jumped at the chance of buying it.

We were living 100 yards away and loved the area, but really wanted somewhere with more space and the potential to redevelop. The bungalow sat in about two acres of land so had plenty of potential space for a growing family. The plot was a good size, quiet with a rural outlook and it had outbuildings which meant Mike could work from home,” says Jenny.

“The fact that we had lived in the village for a number of years, knew the area, had family and friends close by and had children at the local primary school, made the decision very easy.”

There were several developers interested in the site, but eventually the couple were successful and moved in with their three children, Pippa, Oliver and Matthew.

A decade later the bungalow was demolished and Jenny and Mike looked to Welsh Oak Frame to help them turn the home of their dreams into a reality.

Mike explains: “We wanted the house to be light and airy with a large amount of open-plan living, linking the outside to the inside. We also wanted the house to have character and feel warm yet have a high degree of technology integrated, which swayed us towards the new build oak frame route. Having looked at a number of newly-built oak frame houses and barn conversions, we knew that this was going to be the way forward. This was cemented further when we met up with John Edmunds of Welsh Oak Frame at an exhibition.”

Jenny adds: “The planning permission took several years of compromising with the local authority, but we had fantastic people on board who enabled us to achieve the design we wanted, even though we had to sacrifice a couple of outbuildings in the process.”

Using a CAD software package, the couple explored many different designs based on houses they had seen whilst looking at options that would suit their lifestyle. Mike explains further: “The design was adjusted following advice from a local planning consultancy and discussions with Guildford Borough Council, which was then handed to John Edmunds of Welsh Oak Frame to create a final design that could be built using green oak. The final design was then submitted to GBC for approval.”

For Mike and Jenny, building their own home was a new experience and proved to be a very steep learning curve, however with a great team on board any challenges were quickly resolved. Mike enthuses: “I had a very competent and good spirited right-hand man, which helped hugely. Although the frame was erected by Welsh Oak Frame, developing the build from the skeletal oak frame, especially around the dormers, did pose some serious head scratching.

“The full-height atrium proved to be difficult to handle mainly due to its scale. But thankfully it all worked out in the end.”

In terms of managing the project, the couple took on most of the responsibility, but trades were employed as and when they were needed. The project’s electrician had fortunately built his own home, so he was able to step in and help project manage whilst on site.

Using a competent team of tradesmen meant Mike and Jenny could concentrate on the finer details such as selecting the materials for the build. Jenny explains: “We knew the types of finishes that we required, so it was a matter of sourcing the materials and products from magazines, friends and the web to ensure that we got what we wanted at the price we could afford.”

One of the conditions in the planning consent meant the couple had to use a certain amount of renewable systems. In Jenny and Mike’s case this extended to solar thermal panels, rainwater harvesting, a wood burning stove and a heat recovery ventilation system – however, implementing these systems was what pushed the build slightly over budget, as Mike explains: “We had obtained a couple of quotes from builders to take on the complete build but we couldn’t afford them hence why we went down the ‘project manage’ route. We had a budget, but did exceed this by about 20%, although this was still considerably cheaper than employing builders. The unexpected costs really came about due to the green systems we incorporated into the build and not anticipating how much the whole process would cost.”

Initially the build was given a timeframe of six months, but as the complexities of the build mounted the family soon realised that was going to be unfeasible. In the end, the property took a year to complete which was a more realistic timeframe for this type of build.

The new green oak frame house sits on a plot of about two acres on the edge of the village. It is surrounded by landscaped gardens which has a swimming pool, swimming pool shed (both of which already came with the bungalow), office, garden studio, chicken run and vegetable patch approached by a gravel drive over a small stream. To the rear of the office is a large area of hardstanding.

Jenny is a garden designer by trade, so this aspect was relatively easy. She explains: “We have a pool on one side of the garden and a vegetable plot on the other. This formed the basis of the design, both of which are edged by hedges and borders. Both are connected by paths and patios which also link a work studio and herb garden. The house has been positioned in such a way that the central atrium looks directly at a mature oak tree located towards the end of the plot, which is adjoined by a small orchard.

“The front driveway is gravel with a central grassed area in where a magnolia tree has been planted with borders to the front and side of the house. Privet hedging edges the driveway on one side, beyond is a sunken fernery adjoining a small stream that flows on the boundary edge. The garden also comprises a number of zones reflecting different schemes or designs, ranging from English borders to Mediterranean herbs, vegetables, orchard.”

Jenny continues: “The design has been incorporated over a number of years prior to and after the new house was built, which means the gardens have an established feel to them.” Using Jenny’s gardening contacts, the hard landscaping was completed to allow the soft landscaping to be integrated over time.

The house itself is approximately 310m² and has a floor-to-ceiling first floor void with large windows set within oak beams that take in views over the garden. The house is open-plan, light and airy comprising a kitchen/breakfast room, dining area in the void, lounge, snug/TV room, larder, WC, utility room and a plant room downstairs. Upstairs there are four bedrooms, three of which have en-suites, a family bathroom and a dressing room off the master bedroom. The landing has views over the garden from the atrium area. Jenny adds: “The house sits beautifully within its surrounding landscape – we developed it with the house in mind.” Internally, all of the oak beams are visible including the ceiling rafters giving the house a warm feeling – a feature that is especially admired by visitors and guests.

In terms of the finished build, the couple are very happy, in spite of having to make some sacrifices. Mike explains: “We did have some planning restraints which, in our mind, did compromise the design a little and we would have liked more height so the bedrooms could be more airy, but we had to curtail this to fall within planning. Having said this, the house is really conducive to our way of living and just as we wanted.”

He continues: “If we were to have done anything differently we would have tried other means of achieving the required energy-efficiency ratings as we feel the heat recovery system is overkill for what it cost. And if the banks were a little more flexible, we would of course do it all again.”

Offering some words of advice following his own experience, Mike says: “Be prepared for the amount of questions and queries that are fired at you on a daily basis by all trades – it does get exhausting towards the end. Try to keep to budget, but at the same time don’t compromise on quality as you will suffer down the line. Don’t be afraid to ask for technical help; a lot of the trades know a huge amount more than you do as they have been doing this for a good deal longer.”

Reflecting on their self-build journey, Mike concludes: “The sheer scale of the building process was quite daunting, but well worth the pain.”

More in this category: « Light-filled home brings the outdoors in Public convenience receives the ultimate transformation »
Login to post comments
back to top