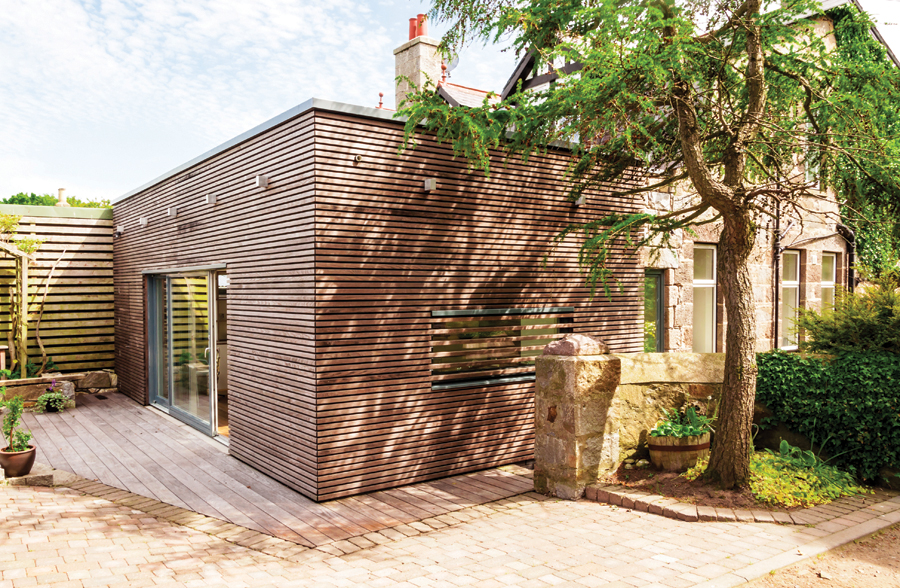 A historic Aberdeenshire home now benefits from a contrasting and contemporary extension, which has brought Scandinavia to Scotland.

When Dave and Veronica Cordiner – both retired school teachers – were looking to extend their distinctive semi-detached Edwardian home, it was their son’s best friend that was able to offer expert architectural guidance.

The friend worked for architectural practice HRI Architects. He brought the project into his office and used an initial design sketch to develop the project from there.

The existing kitchen and dining area was long and thin, and whilst it was tastefully decorated, it defied belief that this was the kitchen and dining area for a family home. There was a uPVC conservatory built to the rear of the room that was both too hot in the summer and too cold in the winter. The rear garden was restricting but offered an opportunity to develop a modern single storey extension that would provide greater integration with the garden, improved access to natural light and that would create a more amenable open plan kitchen, dining and living space.

From Scandinavia to Scotland

Dave and Veronica were both keen on a timber finish to the new extension – a complete contrast to their traditional property. They realised it would be foolish to try and match the distinctive mansard roof with tiling on the outside, so instead opted for a sharp contemporary design.

Mark Williams, Director of HRI Architects, comments: “It would have been a mistake to try to copy the original. The property was of its time so the extension needed to be contemporary too. A pastiche approach would not have reflected the homeowners’ ambitions and may well have cost more too.”

The architects presented viable timber cladding options to Dave and Veronica – who were heavily involved in the design and construction process throughout the project – and together they eventually reached a design consensus. It was the low maintenance and durable advantages of Kebony that appealed to the homeowners. This material is a sustainable alternative to tropical timber that acquires an attractive grey patina over time.

Dave was fully involved with the project throughout and actually built much of the extension himself, using his attention to detail as an artist to great effect. The kitchen was designed and crafted by Martyn Kemp, who used strong references to the external cladding details in a simple, yet effective manner.

Scottish buildings are exposed to extreme weather, so materials need to stand up to the forces of the intemperate climate and the test of time. Timber is an incredibly versatile material, with structural strength and visual appeal, however there is sometimes a perception that it isn’t suitable for exterior application because of the risk of decay. HRI Architects discovered long ago that timber cladding can be successfully used in Scotland, but only if it is carefully considered in terms of material selection and detailing.

Mark explains: “We use Kebony in many projects. We first discovered the material when sourcing timber for the new Forestry Commission offices in Inverness. This was part of a demonstration that UK timber, correctly used, was suitable for all aspects of modern construction, challenging prevailing perceptions at the time. Kebony is ‘pickled’ with a natural alcohol that gives it the robustness required for the often challenging Scottish climate.”

Another key concern for this project was ensuring the modern, Scandinavian-inspired extension worked alongside the traditional Edwardian property. However, the striking contrast between old and new works surprisingly well, bringing interest and a diversity of beauty to the period property.

“In my opinion the extension works well in responding to the surrounding landscape,” Mark adds. “There is a larch tree adjacent to the extension that creates a lovely dappled light onto the Kebony cladding that also creates an appropriate synergy. The garden has been enhanced by the extension, making it more useable – a focal point that neatly subdivides the garden into distinct compartments. The materials, being natural, work well with the stone of the house, the garden walls and the original fencing on part of the boundary.”

Dave and Veronica’s home now has a spacious and multifunctional kitchen, dining and living space that engages with the garden. A large sliding screen links the living space with the garden, while windows and doors link the extension to the side garden and provide views in multiple directions. The carefully specified Kebony cladding introduces an element of Scandinavian design as well as bringing all the benefits of resilience and durability that its technology allows. Appearing to ‘float’ in front of a stainless steel mesh, the timberwork gives the building a sense of lightness, contrasting with the solid granite of the main part of the house.

The interior decor reflects the exterior by using modern materials. The large windows blur the lines between external and internal, as well as providing the desired levels of natural sunlight – especially important for Dave’s work as an artist.

The property benefits from privately supplied water from a well, which is located in an awkward place that restricted the full use of the space. This issue was turned into an advantage, as a concealed open area located behind the cladding now contains the well, bin stores and gas bottles for the Calor gas hob.

“The finished extension is everything I hoped it would be and more,” explains Mark. “The project was a success for several reasons – the design was thorough and the construction was a collaboration between the homeowner and several trades. Dave and Veronica’s attention to detail whilst working directly with the tradesmen meant that the work was of the highest quality.

“I particularly like the contrast between the original house and the contemporary design. They sit well together which, when coupled with the sharp detailing of the finished extension, has created a delightful space. The fact that Mark did much of the work himself is a great story.

Dave and Veronica admitted that they now live almost exclusively in the new extension. This is testimony to the extensive design development and good interaction between homeowner and architect.

Mark offers a few final words of advice to those looking to extend a period property: “Think carefully about what you want to achieve, but don’t be prescriptive with your architect or designer. Let them use their design skills to get the best from the situation.”

More in this category: « Two for one Room with a view »
Login to post comments
back to top