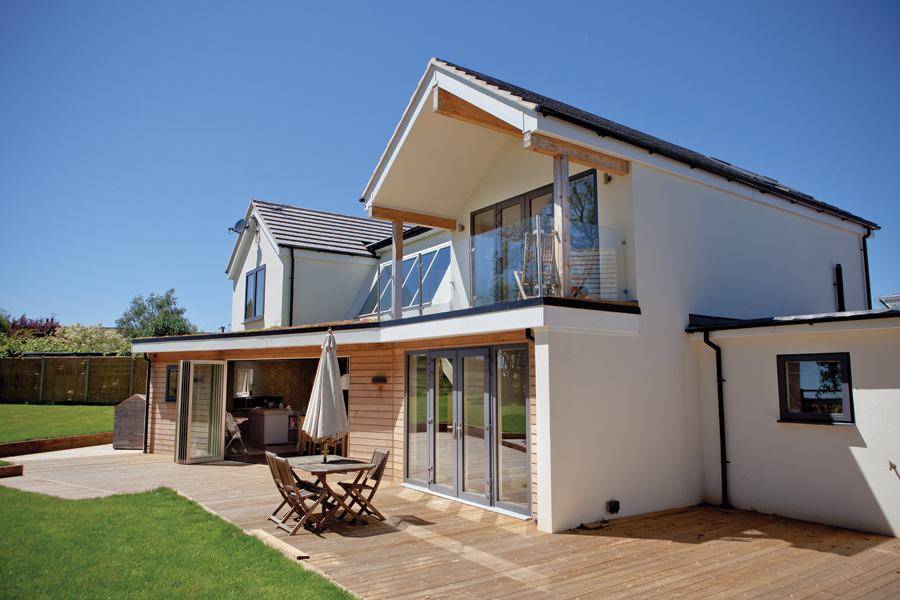 When a young family bought a bungalow with the view to renovate, little did they know they would end up completing a four-bedroom self-build in their garden!

Kirsty and David Gordon bought a bungalow in the village of Wolvey, Leicestershire, with the vision to remould it into their dream family home. The dated property had a huge garden, but it was in a terrible state, with several outhouses and lots of rubbish left by the previous owners.

Kirsty and Gordon hired an architect to visit the property and evaluate how much the extension and renovation was going to cost. Whilst the architect was there, they were keen to discuss a new idea. Kirsty explains: “When the architect came out to see the property we asked him for costings of a self-build in the garden. He said that a self-build would actually be much easier, because we would need to knock most of the bungalow down to get the home we wanted.”

“We had always wanted to build our own house but thought it was more of a pipe dream than a possibility,” adds David. “Once we looked at the possibilities, it became evident that building in the garden would not cost a great deal more than extending and modernising the bungalow, so sought planning permission and set to work.”

David’s dad – a retired project manager who had completed two of his own self-build projects – was able to pass his most prized possession onto his son – his project spreadsheet.

David explains: “The spreadsheet provided guidance on what needed to happen and a schedule to follow – without it I wouldn’t have had a clue! It was all run like a military operation, just one big spreadsheet sorted it all out.”

The family had a strong vision of how they wanted the house to look. They wanted an open plan family-orientated house with green credentials throughout. The aesthetics needed to be contemporary, whilst suiting the local vernacular. The architect – David Arscott from R M James – came up with a concept and the Gordons loved it straight away. A smooth planning permission process followed suit, taking only three months.

The bungalow was to be sold on, but not until the new home was built as the family needed to live there whilst their home took form. However, with two young children and another one on the way, the bungalow needed to be fit for young children. David set to work, gutting and cleaning the property. Clean white walls and functional laminate flooring was applied throughout, as well as a quick garage conversion to create another bedroom for their eldest child, Bethany, who had previously been sharing with her younger brother James.

The bungalow transformation turned into a full-scale renovation, taking place at the same time as the self-build project. Kirsty had her third baby in January and work started in March.

Kirsty reflects: “Harriet lived the first six months of her life on a building site! When it came to the work, I obviously had other things on my mind, so it became David’s obsession really – although I did get involved with the interior side of things.”

David runs his own business from home – a carp fishing holiday company – so was able to work at the same time as project managing and overseeing the renovation and self-build.

David comments: “Sometimes it was hard to shut off from it because we could physically see the site through our window, but it was never a burden. The thing is that during the build you don’t know whether things are going to work out. My worry throughout was that we couldn’t go back and re-do, so there was so much pressure to get it right. But we had a lot of luck throughout! Sometimes we were like, if it rains now then this process will take so much longer, but it didn’t rain from when we started to when the final concrete had been poured – complete luck! The main thing was that we needed to be ready for all the different stages, but it all came together neatly and was brilliant,” explains David.

The couple sourced people locally, often coming upon people by chance, such as when David met the electrician when walking the dog and when they discovered that a guy living down the road was a digger driver.

Kirsty explains: “We did try to find people by researching online, but the first carpenter didn’t turn up and other tradesmen didn’t come back with quotes. We ended up thinking that, if we had to chase them for a quote, how terrible would they be on site! Everything just fell into place, for example David knew the owner of the renewables company and the guy who lives opposite owns a building company.”

“Thinking about it now has made me realise that everyone we used were people were knew! It’s pretty handy really, especially as we’re not in the building trade. What’s nice is that we’ve introduced people through this project who are now working together on other builds,” adds David.

Problems of the unknown

After extensive online research, David decided a modern construction method using SIPs seemed to suit all their ideals regarding speed and insulation values. However, finding tradesmen that would work with this material created an issue.

David describes the problem they faced: “A lot of people didn’t want to get involved because they didn’t know enough about it. We also experienced this with the renewables. The team that did it for us actually took courses on how to install the products – we took advantage of being their guinea pig! It would have been a smoother process if a more experienced company had done it, but we would have spent a lot more. There are so many discrepancies in price for the same systems. There was even a delay with selling the bungalow because we had added solar panels and the new owner’s solicitor needed to research what this meant for them. People just don’t understand renewables! It is a big problem.”

The finished structure has achieved a pleasing airtight test result of 1.95 and using the low U-value fabric of SIPs has meant that many passive house principles have been met. Other ‘green’ aspects of the house include an air source heat pump, solar thermal panels, underfloor heating on the ground floor, a heat recovery and ventilation system, a solar-orientated gallery window to maximise solar gain and a living roof to provide additional insulation.

The new home is rendered off-white, offering a contemporary look, with cedar sections to soften the overall feel. The house sits down within the slight gradient of the plot which means it's very unobtrusive fitting within the various property styles on the street.

Inside, the home is also contemporary, boasting a light and airy ambiance at the same time as feeling homely. There are separate formal rooms as well as a large open plan living space – perfect for entertaining. All rooms are spacious with two rooms at the back – used as play and craft spaces – benefiting from large glazed walls, borrowing light from the rear south facing aspect.

The garage is attached to the house thanks to a long corridor – also home to a downstairs bathroom and large utility room. Above the garage is David’s home office – kept separate although still accessible without leaving the house. There are four large bedrooms on the first floor, all with vaulted ceilings. Two bedrooms benefit from en-suites and a family bathroom sits between the other two.

Large bi-folding doors open onto the patio and garden, which benefits from views over the numerous surrounding fields. The large plot has allowed both properties to have decent sized gardens. Although Kirsty and David were concerned that they hadn’t left enough garden for the new home, in reality there is ample for the size of the house.

Although the family consulted their neighbours about their self-build before the plan was finalised, unfortunately they have experienced some unpleasantness from several neighbours who weren’t keen on the project, even though the new property has no impact upon neighbouring views.

David explains: “It’s a difficult one and I suppose I don’t know how I’d feel about a house going up somewhere where there wasn’t one before. One positive is that this has made the decision to move away easier.”

Kirsty works as a Clinical Scientist at Queen Elizabeth Hospital in Birmingham. The long commute to work was beginning to take its toll, so when she was presented with the opportunity to become a Consultant at a hospital in Basingstoke, she decided it was the right move for her family.

Kirsty explains: “I’m sad because I love the house. If I could pick this up and move it to where we’re moving then I would. Plus, we can do it again!”

In fact, David has definitely caught the self-build bug as he has already bought another plot in a nearby village. This new project will be built with the view to sell, but David is hoping they will build another home of their own in Basingstoke.

“The reason we’ve bought a plot up here is that we can use the same people again. Finding tradesmen is the big thing and we’ve already built a relationship with all the right people. For us, we’re going to rent for a bit to get to know the area before we decide whether to buy or self-build. It is addictive though!” adds David.

Kirsty explains further: “We talk all the time about whether we will buy or build. I think wherever we go it will need to be a project. Selling this home was difficult for us because it was never built to sell. Everything we put in it was to our preference – it’s my dream kitchen! I suppose if we had built with the intention of moving then we would have done things differently. I’m pleased that it’s going to a family with the same dynamic as us – a couple with three kids under 10 – I hope they will love it!”

Although the family are looking forward to the move, they are sad to part with years of hard work and a home built to their exact preferences. One positive is that they’ve gained the experience, determination and passion needed to do the whole thing again in the future.

David offers some final words of advice to fellow self-builders: “Plan everything out and be realistic with your budgeting. Above all, make sure you are surrounded by good people! We were lucky in that we found architects who understood what we wanted to achieve from the start, as well as a superb builder who went that extra mile to make sure it came together.”

More in this category: « Character and charm Compare and contrast: Contemporary extension brings Scandinavia to Scotland »
Login to post comments
back to top