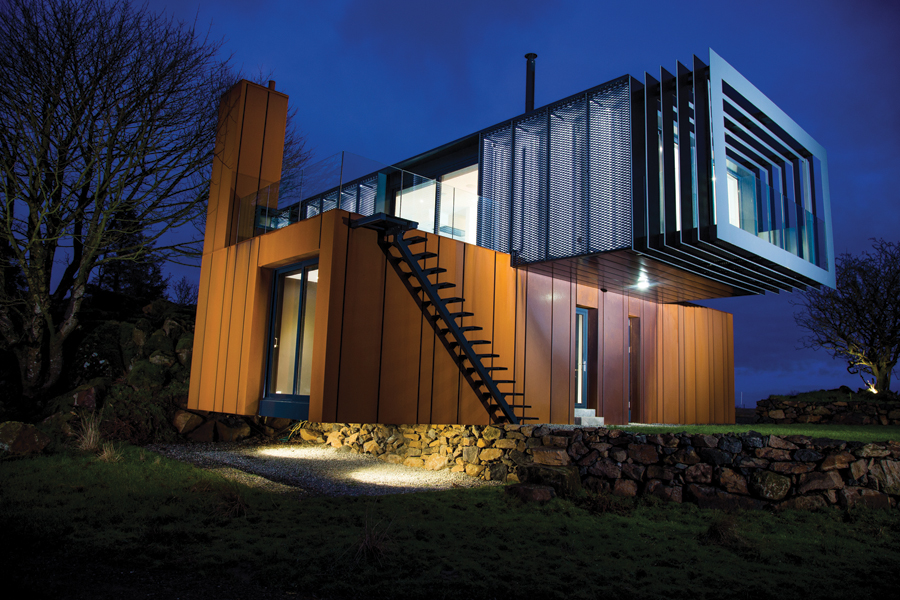 Patrick Bradley’s radical home design presented a number of electrical challenges for contractor AK Electrical, who installed a system based on controls from electrical solutions and services provider Hager.

When Irish architect and farmer, Patrick Bradley, came up with a design for his own home that would be like nothing seen before, he was determined to include as many state-of-the-art features as he could. Of the lighting and heating systems, his key requirement was the intelligent control of all of the functions via his iPad or mobile phone.

Patrick runs his architectural practice on the family farm at Maghera in County Londonderry. He had come up with a design that Grand Designs series presenter Kevin McCloud described as "radical".

Choosing a stunningly beautiful location on the family farm, Patrick built his home using four 45ft steel shipping containers, stacked two-high in the form of a cantilevered cross. Kevin McCloud described the design as a powerful personal statement about Patrick as an architect.

Not only was the architectural approach to the design radical, the build programme for the house was nothing less than ambitious. The time allowed for converting the huge metal shells from sea-going container to avant-garde luxury home was just 10 months. The project was well underway when Patrick Bradley approached AK Electrical with his plans for the electrical control systems in July 2014. As an architect, he knew of AK Electrical’s reputation and so commissioned the company to design his intelligent electrical control system.

Aaron Kearney, proprietor at AK Electrical, supplied the project through its sub-company, iControl Homes. He explains: “Patrick had a vision for his home and he was very specific about what he wanted, right down to the smallest detail. Initially, he intended to have only automated control over the lighting system but while this was possible we felt that in practical terms, it would be better to have the option of switches.

“The other factor was the timescale. We first looked at the project at the point when the house was ready for the first fix of electrics in July. With the build schedule, we had until the end of August to complete the installation, so speed was a key factor. We also needed to be sure that the system we specified would be simple to install as by the time we were on site, activity was fairly hectic, with up to 35 tradesmen of various disciplines working at any one time.”

The Hager system recommended by AK Electrical was the domovea building automation package. Divided into two key elements, domovea consists of a server which connects the KNX bus system onto an IP network, which is then supported by domovea visualisation software which is available across multiple operating systems, including iOS, Android and PC. It is designed to enable building owners to monitor and control their KNX building automation simply through the intuitive control of different devices from PC, laptop, smartphone or tablet. This ticked all the right boxes as far as Patrick’s desire for automated control was concerned, but it was the additional benefit of speed of installation which secured the deal for AK Electrical. The design of the domovea package enabled AK Electrical to build and pre-programme the central control unit in their own workshop so that all that was needed on site was to fit the cabinet to the wall and connect the appropriate cables.

Sophisticated technology
As well as employing sophisticated technology, Patrick was determined to carry his vision through to the aesthetics of design when it came to interiors. Having initially decided against using any form of switches, he found that he was able to incorporate switches from the premium German-designed Berker range from Hager without compromising the standards he had set. The switch he chose was the B.IQ which offers up to four functional elements – temperature controller, information display, tactile sensor and timer – in a single control unit. B.IQ switches incorporating thermostats were fitted in each room, delivering an additional benefit of providing control over five zones of heating.

Homeowner Patrick comments: “When I first approached Aaron I had very little time as it was at a later stage in the project than first planned. There were also constraints on the budget for the electrical installation. When I met with him to discuss my requirements he completely put my mind at rest. In relation to the specification and quality of the systems he was able to provide, he really impressed me. I can honestly say I wasn’t completely aware of the level of technology available. The Berker product range is absolutely first class. It is simple and so easy to use and really didn’t take me long to get to grips with. For example, when I am away from home and my family visit the house, they have no trouble operating the system. I will definitely be recommending this kind of system for future projects."

More in this category: « Firm foundations for your self-build Bricks: Maintaining tradition »
Login to post comments
back to top