Contemporary build is brought back to life 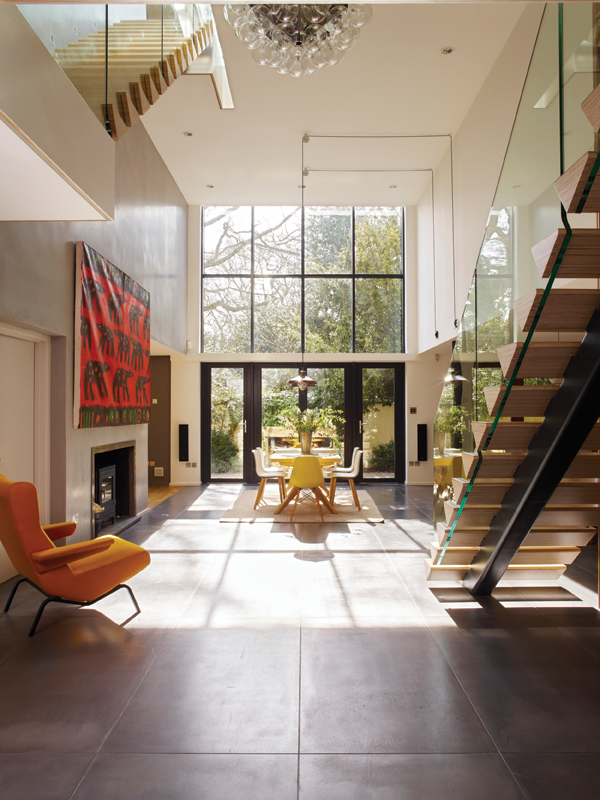 When the owners of an architectural new build in Richmond wanted to refresh their home’s interiors, they turned to Holloways of Ludlow to redesign the tired looking scheme and modernise the function of the house to suit their lifestyle.

Located at the end of a cul-de-sac in East Sheen, the new-build property backs onto Richmond park so enjoys stunning vistas through large windows that also allow in plenty of light. Yet despite its modern design – the property was built circa 2000 – elements of the property had become tired and dated.

The owners approached Holloways of Ludlow designer Martin Smith with a brief that would bring the property back to life and open up the space available. Martin explains: “The client briefed us to redesign the existing tired interior and modernise the failing infrastructure and function of the new-build home. The structure of the modern house had superior exterior views of Richmond Park, so they wanted us to improve the circulation of light and perception of openness of their house.

“The client’s brief was to specifically re-design the kitchen/dining/living space, dressing room and master suite. Another key factor was to redesign the architectural staircase which was failing structurally and was also old-fashioned.

“Lighting was an important part of the scheme in order to enhance and showcase the open plan aspects of the home that featured a triple height ceiling at the centre.”

The previous kitchen was situated in a space higher than the window it sat in front of, so its orientation and placement became a slight barrier in the open space between rooms and needed a new position. The original gloss cabinets and glass worktops also needed replacing with co-ordinating materials through the new bar space, flooring and staircase.

The curved wall built around the staircase also left the corner bar area quite enclosed and dark so the client wanted the stair design to be more open. What’s more, the underfloor heating in the main space was electric and had broken down in patches so the client wanted new plumbed-in underfloor heating and all halogen lights to be replaced with LED. Meanwhile in the master bathroom, there was a whirlpool bath too high to climb in and out of, and the oversized frosted glass entrance door had shattered leaving no separation from the bedroom. In the master bedroom, dressing space was sporadic in its layout and needed to be re-designed for better use.

A sense of real purpose

Martin continues: “My first task was to replan the ground floor living space, re-orientate the stairs and design the kitchen and bar to open up the space. I also suggested the need to re-orientate the kitchen and redesign it with more ‘material value’, with a focus on co-ordinating it also with the bar, flooring and staircase which Holloways of Ludlow also designed.

“We aimed to make sense of the open-plan and provide a real purpose to each of the living spaces and improve the relationship between the kitchen/dining/living space on the ground floor and improve the first floor. We installed new first fix services, including new underfloor heating with additional trench heaters to replace the failed electric mat, new LED ambient lighting and new feature pendants to suit the re-designed layout. New sub-floor insulation was also installed as well as polished plaster wall. The new stair bookshelves also dramatically improve the corridor outside the kids’ bedrooms, replacing a plain wall with a fire-rated glass backed bookcase.”

On the ground floor, the re-design focuses on material value, and creates a seamless flow between the living spaces. Martin adds: “The client’s original kitchen was tired and dated and seemed to have become an afterthought at the end of the design process. The wall run had been placed in a space higher than the window and an island was positioned in a space that gave the owners a barrier in the open-plan space between the ground floor rooms.

“The new kitchen design itself blurred the lines between furniture and kitchen design, and integrated seamlessly into their open-plan home. After taking references for orientation from existing pillars in the space, I designed an angled island and cabinetry to improve the flow and light circulation. French concrete specialists, LCDA Concrete, of which Holloways of Ludlow are a supplier, were chosen for their large format tiles and worktops in both the kitchen and bar. To create contrast, I designed matt oiled stave oak with exposed ply edges for the cabinetry, which was also mirrored on the nearby stairs.

“Since the hob and sink were designed within the island, it was important to allow space in between for food preparation. The angle of the island allowed this area to be even more ergonomic for the homeowners and included the detail of a Corian chopping block. The double pocket door cupboard in the tall cabinetry allowed further functionality within the heart of the kitchen space. This opened up to reveal further counter space, a built-in microwave and space for the toaster, coffee machine and food processor. A Quooker boiling water tap was valuable to the design to remove the need for a kettle on the worktop.”

Martin adds: “It was important to integrate as many appliances as possible to create a seamless fitted look. Gaggenau handles were used in the tall cabinets to house a Gaggenau Vario cool larder fridge/freezer, which included the functionality of a water/ice dispenser and also featured a pocket door unit and larder cupboard. A Miele dishwasher was also integrated into the island.”

The construction of a new staircase was a vital aspect of the renovation. Holloways of Ludlow designed the staircase and commissioned stair structure and glass specialist, Elite Metalcraft, to manufacture it. Martin explains: “We pride ourselves on detail and precision, for example our close attention at the point where we installed the ‘millimetre-perfect’ factory bespoke manufactured stair structure meant that we had to shift it 23mm to the right to ensure it lined up perfectly with the bookcase. Obviously the staircase needed to be conceived, measured and manufactured to complete precision in the first place.”

The team at Holloways of Ludlow decided not to alter the exterior of the property so windows and doors stayed as existing. Martin adds: “Beyond that we re-rationalised the interior fixtures, services and design. Unlike many projects we work on with typical Victorian or Edwardian London homes, this modern building already had a great open plan space, especially so with the triple height ceiling at the centre, which the client loved.”

The company’s approach to sustainability is finding a high performing solution that will last for a long time. “We will always want our installations to be built to last,” explains Martin, “with high quality systems and quality materials. The previously installed electric UFH system had failed and, in the process of lifting the floor and digging up the previous screed to install a plumbed system, we found that the floor had not been insulated properly. So a newly insulated floor with more efficient wet UFH alongside extra trench heaters would perform much better. The new 20mm thick concrete tiles would also act as a thermal mass collecting heat from sunlight through the existing south facing large windows and doors.”

Commenting on the overall result, Martin is extremely proud: “I genuinely love it all. I think everything works together so well as a whole, with great quality, textured materials used throughout. I’d probably say I’m particularly proud of the stairs. I really love the stacked ply stair treads and the bookshelves line up exactly how I hoped. We are proud to say that the kitchen won the ‘Ultimate Kitchen Design of the Year’ award at the 2015 Designer K&B Awards in London last year and more recently won ‘Kitchen Designer of the Year’ (over £50,000 category) at the 2016 kbbreview Retail & Design Awards.”