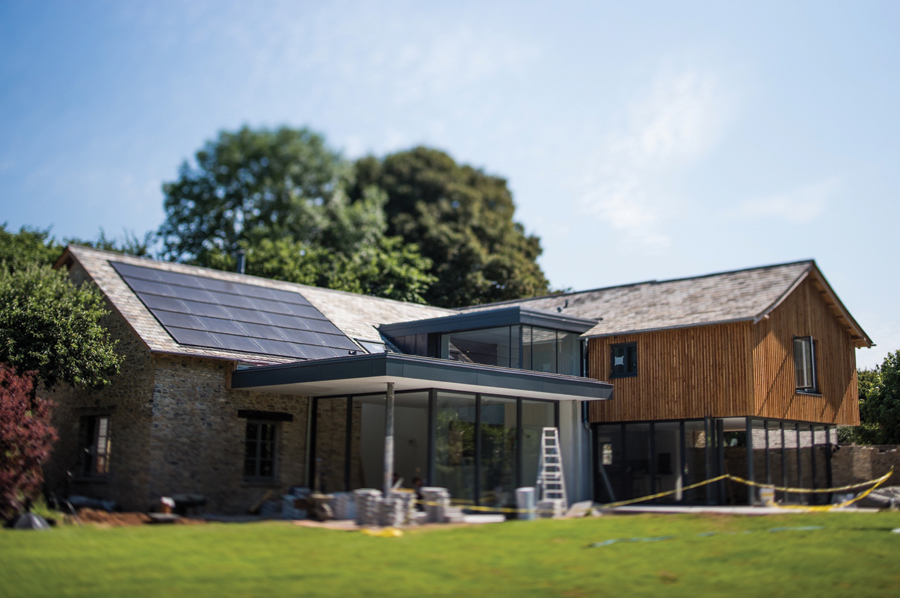 When Nick Oldridge and his family found their perfect plot, a disastrous discovery turned them from hopeful renovators into fully-fledged self-builders overnight.

Finding the perfect plot in an area with a low density population is no mean feat, so when Nick and his family found a renovation project in Totnes, South Devon, bursting with character, they packed their bags and headed south from Leeds.

Nick explains: “We found an old outbuilding that had once formed part of a manor house dating back to the 1850s. The exterior was full of character and charm, but we were slightly underwhelmed by the interior. It had received several extensions and modifications over the years, so thought that we could simply gut it and remodel the layout to suit our needs. The property also had beautiful grounds and featured a stream at the bottom of the garden, so it was hard not to fall in love with it.

“Having previously been involved in kitchen and bathroom renovations before, we felt confident that we could take on a slightly bigger project. We took the plunge and bought it!”

The family longed for some time for a life in the country and with relatives already in the vicinity, it was an easy decision to make. However, once the house was purchased a horrible discovery left Nick feeling like it was the worst decision they had ever made, as he explains: “In the past we’d conducted a property survey and ended up losing a lot of money. There didn’t seem much point carrying out a survey if we were ripping it apart. However not long after the contract was finalised, a structural engineer condemned the entire roof structure!”

Nick continues: “When we knocked the extensions down, parts of the structure fell down with it. When we removed the roof altogether, that made the structure even more unstable. In the end we only had a few walls remaining. We took our team’s advice and ended up levelling the whole building and essentially were in the process of constructing a new build. However, as we already had the entire design pre-approved by planning, we had to re-apply but this time with the intention of it being a new build.”

Despite being given a clean slate to work from, Nick had invested heavily in the initial design plans. The renovation project would have retained the property’s character and was essentially what had drawn them to the property in the first place. Instead of submitting a new proposal to planners, Nick stuck firmly to his vision and applied to rebuild the original stone building.

Once planning was accepted and the designs finalised, construction swiftly commenced. Yet the project received one final setback. As a new build property, Nick and his team were obliged to carry out a Flood Risk Assessment – this was not required for a renovation. The assessment revealed the property would need to be raised on piles by 200mm. “It was painful to watch the contractors digging down to build up,” comments Nick. “But at the end of the day, we now have a house that’s future proof.”

“Even after the setbacks, our vision for our new home remained the same – we wanted to build something sensitive and in harmony with its surroundings. We are not overlooked at the back of the house so we aimed to transform the rear of the property – masses of glazing to let the light in and bi-folding doors to open up our home to the garden.”

Nick called upon a local architect for the early design plans, but once the contractors, Goulden & Sons, became involved they took the lead and were appointed as the main project managers. Nick explains: “Logistics wise, we were tempted to manage the project ourselves as we were residing in an annex in the garden. In the end, we put our faith in the contractors, but were very much involved in every step of the way.”

As the floor of the building had to be raised as per the Flood Risk Assessment, the layout of the home had to be locked down fairly quickly. Internally, the design caters for open-plan living and is tailored to the country lifestyle the family always longed for.

The ground floor consists of a kitchen and dining area, plus another living area which opens up onto the garden. Also on this level is a living room, playroom/study, utility room and, of course, a wetroom – perfect for hosing down the family’s children after an afternoon playing in the stream! Meanwhile, the first floor features five bedrooms, a family bathroom and two en-suites.

The material choices were dictated largely by ‘blending in’. The original stone was used from the house and the stone mason sourced more from a nearby field. Slates were recovered from the property with only a few additions.

Nick explains further: “The architect recommended some materials, but for the walls I used a Porotherm clay block, which comes from my background acting as a consultant for Wienerberger. We wanted the building erected as quickly as possible and this clay block enabled us to do just that, especially with winter approaching.”

“Many of the materials are ‘us’. In the pre-internet days, the architect or contractor would have said “here are your choices for skirting, door handles etc” and you would have just picked the middle range product, but in the world of the internet you have so much freedom and you enter a whole new world of materials, and in a way it’s almost bewildering, but we felt it was important to make these decisions. When the choice is open to you, you feel that you have to play a part in it.”

Nick continues: “The floor was my wife’s find, which she sourced from Victorian Woodworks at a design event in London. As we were using the stone from the original property and second-hand slate, we were worried that it would look like a new house inside – we really wanted to retain its character. Admittedly, the floor was not cheap – and it’s where we overspent – but it has had such an impact on the whole property. It adds bundles of character and warmth.”

Adding further to its sustainability and eco-credentials, the home features air source heat pumps so it is eligible for the RHI. “I brought in an energy consultant based in Exeter to look at the renewables package because I wanted to get it right,” adds Nick. “We also have a solar array, pv48, which comes from Sandtoft, a roof tile manufacturer I used to be a director of, and that's located on the south elevation of the roof. It’s a building integrated system which, in my view, is more aesthetically pleasing and fits neatly into the roof slope.”

Reflecting on his lessons learned, Nick offers some final thoughts to prospective self-builders: “My advice would be make sure you’ve got that thinking time and never rush decisions. Now that we have completed our home, we are occasionally tortured by choices that we could have, or should have, made. I also found that one of the hardest things to do was work out the size and orientation of the rooms, so I’d really recommend using an architect and also make sure your existing furniture is taken into account. This will ensure all the belongings you bring with you fit entirely as you intend.”

For Nick and his family, the start of this project left them feeling like they’d bitten off more than they could chew, but one step at a time – and with the help of a very competent contractor – they took it in their stride. The home is truly magnificent and is one that certainly captures the perfect blend of old vs new.

More in this category: « Contemporary build is brought back to life Come dine with us »
Login to post comments
back to top