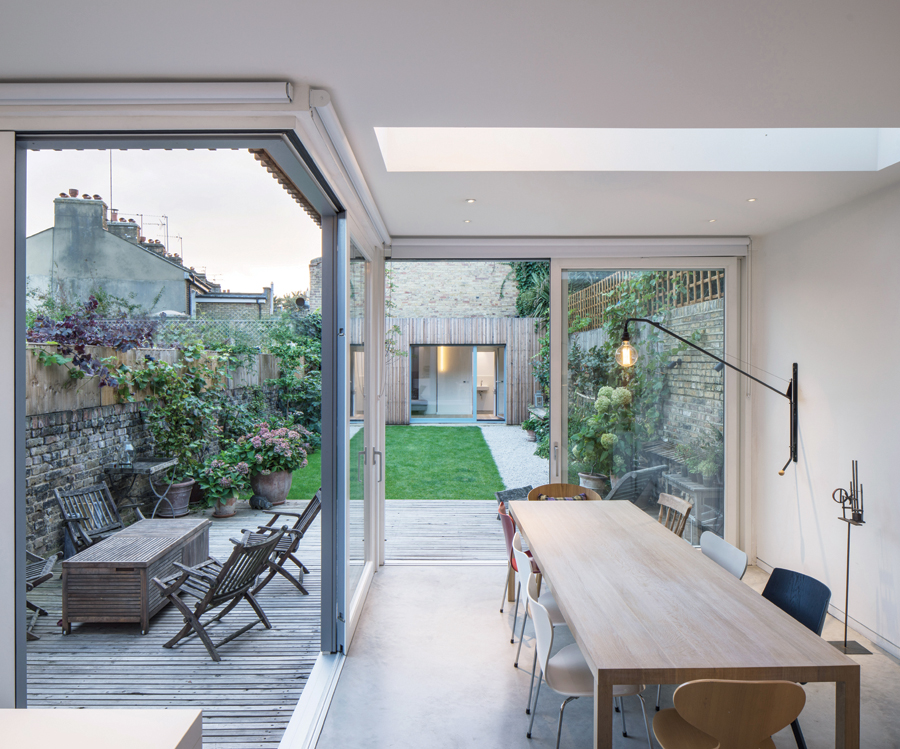 With a brief to transform the Victorian building into a family home, architects Timo Haedrich and Chris Wong from Haptic Architects set out to completely refurbish and extend this 1870-dated property. The intention was to form a connection between the old and the new, to juxtapose the Victorian craftsmanship and love for intricate detail with modern construction techniques and to create generosity of space and light.

The London property had been extended in the past, however the addition was unsympathetic to the building’s heritage and the new owners found it unattractive and ill-suited to their needs. For this new project the existing Victorian fabric of the building was kept mainly intact, but the existing extension at the rear of the home was cleared, providing the team with more or less a blank canvas to work with.

The project was complete within the predicted timeframe of six months and finished on budget. The extension and garden room has added approximately 45m to the property.

The new extension comes in two parts, with a space added onto the property and a coordinating structure at the end of the garden. The added structure learns from the existing Victorian building’s architectural intent, with well-proportioned spaces, generous ceiling heights and windows that allow plenty of light into the new space.

Timo and Chris have created a modern extension that amplifies contemporary living with large rooms with enhanced exposure to daylight. The extension is an open plan space that is greatly used by the family, combining kitchen, main living room and dining area.

The interior space extends seamlessly into the garden and connects with the garden studio. The urban garden was large enough to introduce a substantially sized structure at the property’s rear. It provides a secluded space to be used by guests, or acts as an additional space to the main house.

Timo comments: “One challenge this project creates was that a quite substantial part of the existing structure needed to be propped up during construction. A large ‘goal post’ structure props up the existing home, so that a column free space could be achieved.

“When it came to material specification, we utilised a limited palette of materials and colour with oak and concrete featuring throughout the property to constrast with the white walls and kitchen. These materials have been used and detailed in a variety of ways to provide varying tactile experiences for the family. The extension is clad with slender slats of untreated larch, which will naturally grey over time.”

The new interweaves with the old, through a continuous concrete element or ribbon, extending from one side of the house – the Victorian living room to the modern kitchen at the rear of the property – integrating fireplace, storage, seating and kitchen.

Original elements have been retained to recognise heritage in the old part of the house, such as the high ceilings, decorative cornice and distressed staircase in the hallway. The new rooms are clean, simplistic and modern, but are not an unsympathetic to the Victorian structure – they are a subtle contrast to the old and enhance the property’s suitability to modern living.

The kitchen is stark and fairly industrial, with sharp corners and smooth white and grey worktops. Natural light pours down onto the worktops thanks to two large skylights, creating a light and airy feel to the much-used space. Poured concrete has been used in the two new structures, which works well beside the white walls.

Colour has been added sporadically and with purpose, such as the single yellow bar stool amid three grey stools at the kitchen breakfast bar. Two small square pieces of artwork are dwarfed in contrast to the two rectangular skylights.

The straight-laced, vertical timber cladding to the back extension and the garden studio, gives the volumes a clear monolithic form. The untreated timber slats create a surface, which appears soft, drape-like and tactile, with a subtle three dimensionality.

The extension integrates with the garden and draws a parallel with the garden room. Full height glazing and sliding glass doors draw more natural light into the room and open up the space to connect with the outside. Wooden decking is slatted much like the exterior cladding, with wooden garden furniture further complementing the timber-focused design choice.

Mid-century furniture makes an on-trend statement in the garden room, working as a stylish contrast to the concrete flooring. Artwork is a central design aspect to the whole property’s neutral palette, especially within the older parts of the home.

Timo adds: “The finished space is everything I hoped it would be and more. It is especially great to observe the big skies towards the back through the large windows. This is my favourite aspect because the expansive glazing allows plenty of light into the kitchen and living areas.”

Haptic is a London and Oslo based architectural studio that was established in 2009. As a practice, their designs are conceptually driven, inspired by nature and formed through a critical, iterative design process. This design demonstrates a strong emphasis to user experience and feeds into the meaning of ‘Haptic’, which refers to the sense of touch.

“My advice to anyone looking to extend a Victorian property is to respect the existing fabric and try to work with the exciting spaces,” concludes Timo. “I would recommend using as much insulation as possible and try to keep the material palette simple. Looking back, there really isn’t much I would have done differently! Perhaps it would have been good to add a basement.”

More in this category: « Homage vs heritage Self-build paradise in the city »
Login to post comments
back to top