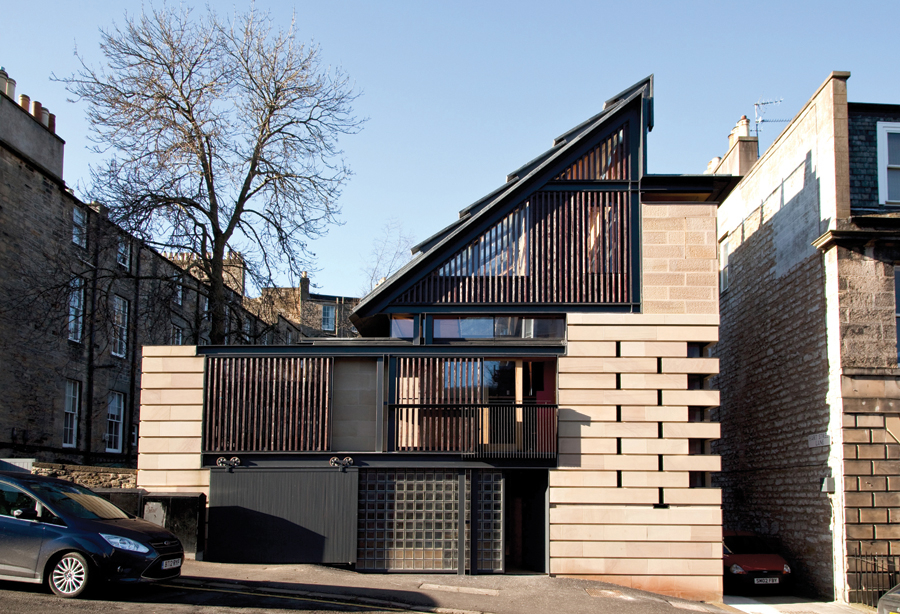 In 2012 Richard Murphy pursued every architect’s dream of building his own home as both an architectural and environmental experiment.

Richard Murphy is a celebrated architect, recognised academic authority within his field and proud owner of an OBE. Since founding his own architecture practice in 1991, Richard Murphy Architects has won nineteen RIBA awards – more than any other practice in Scotland.

In 2012 Richard set out to design and build a home for his own use. This project is a very rare example of the construction of a contemporary house within the World Heritage Site of the New Town of Edinburgh. New Town is a central area of Scotland’s capital, often celebrated for its original neo-classical and Georgian period architecture and considered to be a masterpiece of city planning.

The modest plot is approximately half a garden in the open space between the back of houses on Forth Street and the gable end of houses on Hart Street. The junction between these two streets is in an unplanned part of New Town where two estates meet, with an unsightly gable end to the west side of Hart Street. The design needed to resolve the issues of space, become a bookend to the gable end and be a beacon for contemporary design within a World Heritage Site as well as continuing the same facade stonework pattern of the adjacent properties.

Although the design proposal was recommended refusal by Edinburgh City Council Planning Department, in a highly unusual decision, Councillors voted nine to four to reject the planning advice and to allow the construction to go ahead.

Richard explains: “The site on Hart Street is unique – sitting on the boundary of two historic estates in Edinburgh’s Old Town, which had developed at the same time but without coordination. It has been a fantastic – and at times frustrating – experience designing a building that solves the issues of the site and that is laid out exactly as I want my home to be.”

Maximising the use of space was key. Although the home has a modest floor area of 165m2 on a footprint of 11 x 6m, it contains three bedrooms, an open plan living/dining/kitchen area at varying levels, study, basement, garage, utility room and roof terrace.

Richard set out to demonstrate how contemporary design might contribute to a historical location. The gable end would traditionally not have been exposed, therefore the house has become a bookend to complete this unresolved corner. The house also had to be careful to preserve the privacy and views of the sky from the adjacent apartment, which contributed to this bookend section. The gable end is a triangular element floating over a horizontal window. This section is clad in louvres with a background of lead and glazing.

The stonework has been concentrated to either end of the elevation to balance the more delicate, central elements. The stone itself remains divided into striated ashlar below and smooth ashlar above. There are little corner windows which pick up and reinterpret the idea of coin stones. These are then coordinated with the interior via a bookcase – an idea that continues onto the northern elevation.

The central section consists of a glass block and timber garage door at ground level, a sliding window, stone classing and movable louvres.

Another key concern for the new home was sustainability. The roof consists of photovoltaic cells and absorbs heat through substantial south-facing glazing. Beneath this are mechanised insulated shutters allowing the glass to generate heat when open, but prevent the windows from radiating heat when closed.

A computerised internal air circulation system takes warm air from the top of the house to the basement via a gravel rock store to produce a delayed heat source for evening use. The main heating source for the house is a 150m deep ground source borehole connecting to a heat exchanger which feeds underfloor heating. There is no gas in the house and all the major windows have insulated shutters. Heat is also extracted from the flue of a log burning stove to pre-heat hot water.

Rainwater – which follows a course of pools and waterfalls on the roof terrace – finds it way to grey-water storage tanks in the basement, which is then used to flush toilets. The tanks also supply a sprinkler system.

Richard sought design inspiration from the architects that have shaped his academic career. He is an authority on the work of Carlo Scarpa, so the roof terrace is a homage to the garden of the Querini Stampalia in Venice using the same exposed aggregate walls and sourcing tiles from Scarpa’s original manufacturer in Venice. Internally, the Venetian ‘stucco lucido’ coloured plasterwork is used extensively. The Sir John Soane Museum and Maison de Verre are also great influences in the use of illusion and moving elements. Reitveld’s Schroder house makes an appearance in a ‘disappearing corner’ stone panel opening, designed to be the same proportions as his famous window.

When asked about the inspiration behind the design, Richard adds: “It is a quarter Soane, a quarter Scarpa, a quarter eco-house and, referring to all the proposed moving parts, a quarter Wallace and Gromit.”

Richard was delighted to move into his new home earlier this year.

He concludes: “Prince Charles once asked me if I lived in a house that I designed, and I was fortunate enough to be able to respond positively. Many architects aspire to design a house for themselves, but never have the chance to find the right plot or the means to buy it. To be able to specify every aspect of your own home is a once in a lifetime opportunity that few people achieve and I would absolutely recommend it if you get the chance.”