Unique extension to Victorian semi is the perfect fit 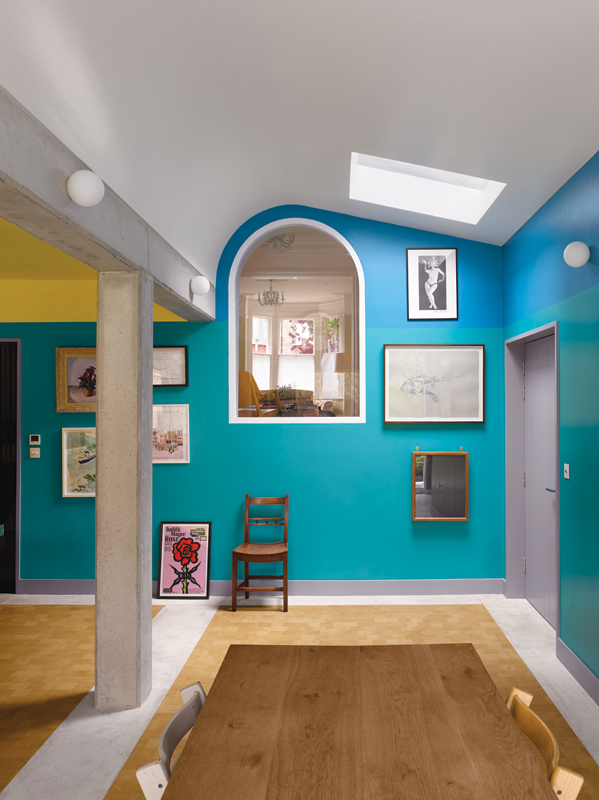 Rupert Sanderson, his wife Rowan Routh and their three young sons were looking to extend their North London Victorian home. The house had only a narrow scullery-type kitchen with only a small window to the garden. The aim was to extend and open up the space into a generous room that addressed the back garden for the family to spend time together in, eating, playing and relaxing.

The house was built in the 1860s on land gifted to the Mercers Company – the twelfth century cloth merchants’ guild. It is built predominantly of stock London yellow brick with a more elaborate red brick front facade and matching red brick details, such as the lintels over windows. The 20m long garden benefitted from a widening adjacent to the house, where a garage had been built, stepping 2m into the neighbouring property. Being in Islington’s Mercers Road/Tavistock Terrace Conservation Area, there were constraints on development. This meant that Rupert had struggled with planning consent and had his first application rejected.

He decided to bring David Kohn Architects on board with the project to help work around the complicated restrictions. Their approach was to have a strong concept for the remodeling that directly addressed the Conservation Area guidance relating to scale, massing, detailing and materials. This time the planning application was successful and work was completed last year.

The new extension is the full width of the site. A concrete frame supports the first floor return and creates a screen to the garden. Externally, the concrete frame has been faced in red brick slips that match the front facade and brick lintels.

The newly elevated status of the rear facade effectively gives the house two faces – an arrangement that the British architect, Peter Smithson, once referred to as a ‘Janus building’. In the early design stages, the project was described to the three boys as a fox in the garden and the story stuck. The red brickwork is given a textural quality, like a coat, through varying the orientation of the brick, reminiscent of Finnish modernist architect, Alvar Aalto’s Muuratsalo Experimental House.

The extension is intended to feel like a pergola, with concrete columns framing outdoor spaces. The finished space is divided into three zones, a kitchen with island unit, a dining room and a small winter garden. The dining area is a tall barrel-vaulted space with a new high-level arched internal window to the original house and a circular window to the garden. This arrangement ensures that when sitting in the living room one’s view is directed both to the dining room and through to the garden beyond.

In order to maintain the appearance of a structure standing in a garden, the screen of sliding metal-framed glazed doors are set inboard of the concrete columns, the back of which are therefore seen through the glazing.

The garden faces north, so efforts were made to improve daylight to the rear of the building and provide optimal opportunities for outdoor living. Therefore, three small trees were felled, significantly increasing light onto the rear facade. A paved terrace was laid that swells into the garden at exactly the spot where the sun lingers longest in the summer months.

The interior is both materially rich and colourful. Materials were chosen for their textural qualities and contribution to the comfort of the space. Profiled timber facing to the kitchen island performs an acoustic function; end grain parquet mats inserted in the concrete floor give clear definition to the kitchen and dining spaces and warmth under foot; gloss black tiles reflect light and give the kitchen a greater depth. The bold colours – tertiary blue, green and yellow – are reminiscent of Adolf Loos' modernist interior design within his Viennese houses of the 1920s. The intention was that the walls would be densely hung with art works, which Rupert has begun to do, such that the feeling of the space was one of conviviality and in a cultured life close to nature.

In terms of the architect’s inspiration, the project develops themes first realised in other projects Carrer Avinyó – a refurbished apartment in Barcelona – and Stable Acre – a holiday home in Norfolk. The practice is interested in a highly contextual architecture, freed from rigid formal and material constraints, that is both conceptually rigorous and playful.

More in this category: « Self-build vehicle for change 50 shades of white »
Login to post comments
back to top