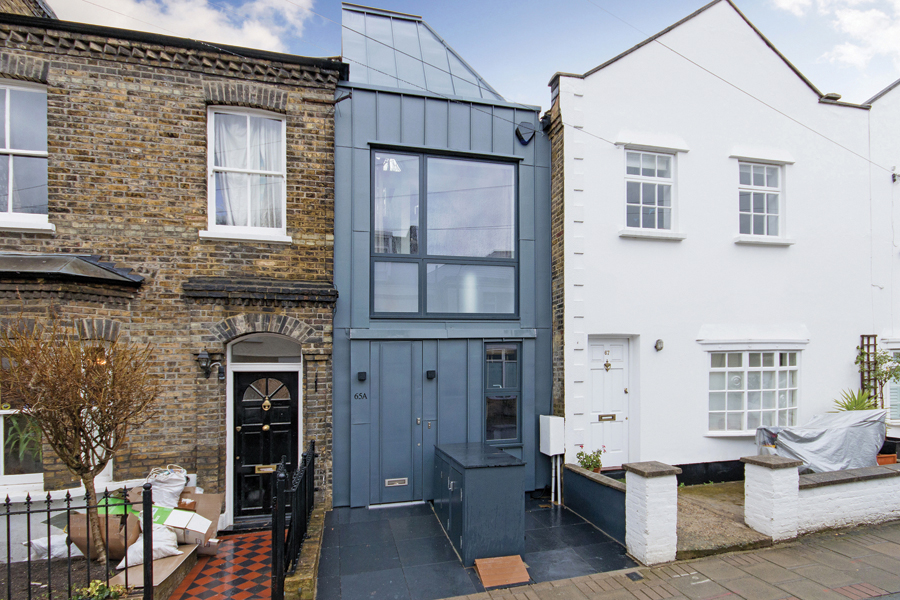 A garage squashed between two houses has been transformed into a unique three storey house.

When Paul Crowther renovated and sold on an East Putney terrace in 1992, he decided not to sell the adjacent garage. Paul explains: “I decided to keep the lock up garage for my own rather than selling it with the property as it was worth very little and was a useful place for storage – especially as I worked as a property developer.”

Having used the garage as storage without much thought for nearly 25 years, it was when Paul reworked his will that he carefully considered all his financial assets. He worked out that if he gained planning permission for the small space it would increase the property’s value. Although Paul looked into the process with no initial intention to actually convert the space, once planning permission was granted the temptation to build something unique was too appealing for the ex-property developer.

Paul explains: “The idea was that a property would be more valuable once converted – so the initial plan was to see where value could be added. I wanted to experiment with the space limitations – it was always going to be a compact area and therefore complicated to work with.

“The design concept originated from my desire to try and create something a little different. I realised that it wouldn’t have much going for it in terms of space or features because there was no escaping the fact that it is a very small unit. The plan, therefore, was to try and make it both 'sexy' and cutting edge.”

Overcoming limitations
The “sexy” approach was inspired by the way that the hospitality sector creates high-end and modern designs within compact spaces – such as in boutique luxury hotels. Here, modern materials such as zinc cladding and black glass achieve the desired look.

Paul continues: “The main challenge was the small space. Large properties allow for versatility, so designing within an area like this is very limiting. I suppose it’s a bit like designing a boat where you need to think carefully about how so much can be crammed into such a tiny space.

“I explained to the architect what I was hoping to achieve and basically told him to tear up the rule book, not to conform and to let his imagination flow. The first design he came up with was rather conventional and, in all honesty, too boring for what I felt the space could achieve. I told him to ditch conventionality and to not be scared of putting something forward that was out of the ordinary. The whole design process was very much a collaboration between me and the architect.”

Another challenge that the small space presented was that, during development, it didn't allow for more than one trade to be on site at any given time. This led to costs beyond what Paul originally anticipated as well as complications within the development process. Despite this, the project took just nine months from start of building work to completion.

Utilising space
The finished property utilises every last inch of space and has high quality fixtures and fittings throughout including solid oak floors, German kitchen units and appliances, under floor heating and stylish sanitary ware.

The garage has become the ground floor, with two storeys added, each one stepped back. With a total width of 2.6m, the space required an open-minded alternative to the traditional house layout. A roof light has been added to the ground floor, where there are no windows and consequently no views. Thinking about which rooms can function without a view, the bedroom and bathroom presented the best option for this space. This space now comprises a “sexy” bedroom suite with extensive built in wardrobes, open plan shower room and separate toilet.

Paul explains: “The ground floor gets daylight but has no outlook whatsoever and so, to me, that was a space far more suited to the room for sleeping. The living room upstairs benefits from large double aspect windows with views - far better for a living space than a bedroom.”

The first floor has a slim galley kitchen that fits neatly within the long space, with a surprisingly spacious reception room behind. A second floor offers a small, light mezzanine work station, with doors that open onto a balcony – along with seeded flat roof.

Paul is now looking to rent the property so that it continues to be an increasing asset, saying: “The finished space is everything I hoped it would be and I’m delighted with the end result. I think it’s really sharp and well designed, with each room offering something special. The local community says it has a very “Notting Hill” feel about it – which I take as a complement! I envision it to be a great space for a young professional to live.

“My advice to anyone looking to convert a property is to do all your research and thinking before the work starts. Try to get the concept stage right so that you face less challenges and unknowns later on.”

More in this category: « Let your true colours shine through Unique extension to Victorian semi is the perfect fit »
Login to post comments
back to top