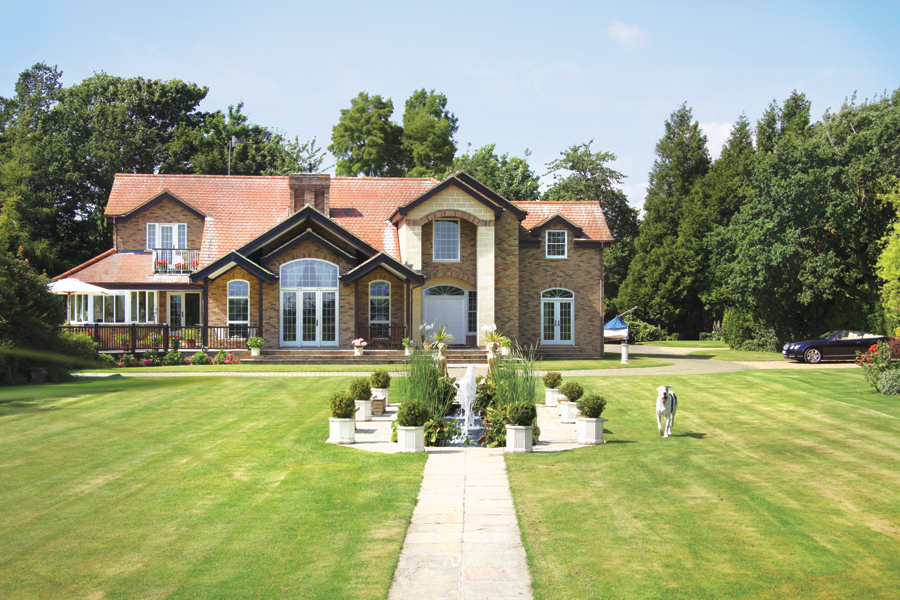 A multi-million pound refurbishment in Suffolk has sought inspiration from American architecture. The revamp has seen significant interior remodelling and extension work completed in order to create the desired look.

The 6000ft² property was originally built in 1999 but has, in the past year, undergone a £500k refurbishment to give it a truly modern feel, both inside and out. The new look incorporates a hand-built, locally sourced kitchen, double garage-cum-workshop extension and 38 new windows and doors.

Clive Underdown, the owner of the property, explains: “We took on the refurbishment project as we needed to extend, creating an annex workshop and garage. I really like the style of modern American homes, so sought to recreate that style in my own house.

“We used the same architect as when we originally had the house built to design all the new additions including a completely new set of windows. The glazing has worked so well that we even went to the expense of putting a floor to ceiling window in the garage block to match the two large windows in the main house.

The vision of the home’s new look was to maintain the visual impact of the original design, but with high flying roof lines and large new glazed areas. The latest materials were matched to the original design to ensure the home is the latest in both look and energy efficiency.

Clive continues: “Even though the style of the windows and doors was very important to me, they had to perform as well. We decided to specify Black Millwork’s American Anderson range as they delivered on both aesthetics and thermal efficiency.”

Installed into the home were Anderson French doors and Woodwright casement and arched windows, including a particularly attractive and large window in the gable end of the new double garage.

Mark Wright, Managing Director of Mark Wright Construction Ltd, oversaw the project and comments: “The team at Black Millwork were great to work with and made the installation process as smooth as could be asked, they even helped us out with supplying a replacement locking mechanism that was damaged on site.”

The revamp took place over eight months, however, Clive faced difficulties in the plot’s foundations when he discovered the ground conditions to be worse than expected. A series of 24x12m friction piles were sunk into the ground to stabilise the foundations and then a ring beam created the traditional foundation trenches. Although this did not impact on the time, it did create additional costs. Other unforeseen costs included buying higher specification electronics and kitchen.

The finished space benefits from an openplan annex that has the latest in audio electronics and high specification kitchen and bathrooms. In the kitchen a lime palette becomes the focus alongside several statement radiators that spiral much like a spring. Pale worktops contrast yet complement with the timber storage cabinets and high-end appliances sit neatly within the wood. The space benefits from lots of worktops and several seating areas as well as a downdraft cooker hood that is almost invisible when not in use. These contemporary accents flow into the bathroom which is home to another feature radiator and a floating sink basin.

Clive loves the new space: “It exceeds our expectation in terms of liveability, low running costs and features. It nestles into the surroundings and matches the main property beautifully. The media room is my favourite as it is a great place to be away from the grandchildren!

“It’s amazing how the right fenestration and doors can totally transform your property without spending the fortune it would cost to knock down and rebuild. The quality of the products is clear to see and I’m looking forward to the rewarding energy savings in the years to come.

“My advice to anyone looking to renovate or refurbish is to get a good architect or surveyor. If you can use a tried and tested construction company and builder then do so – we had worked with ours before and it avoided many of the ‘extras’ discussions that one has with contractors. Another thing to be aware of is that the spec always ends up changing once the build has begun, so make sure you budget for this.”

The United States of America is a much larger country than our little island and, as anyone who has ever watched ‘Extreme Makeover: Home Edition’ would know, the scale on which they self-build correlates with the country’s sizeable land mass. Over 40% of new homes in America are self-built. The average size of homes built in the US last year was 2600ft² compared with 818ft² in the UK. These big homes need big features and the New England Style – also known as American Craftsman – allows for volume alongside interesting architectural features. This style of architecture was revived in the late nineteenth and early twentieth centuries when it became fashionable –influenced by the British Arts and Crafts Movement. This style is a popular choice for self-builders as big windows, low-pitched roof lines and decorative elements represent that distinctive look that self-builders desire. Common features of the New England Style include:

More in this category: « Trials and tribulations The benefits of modern construction methods »
Login to post comments
back to top