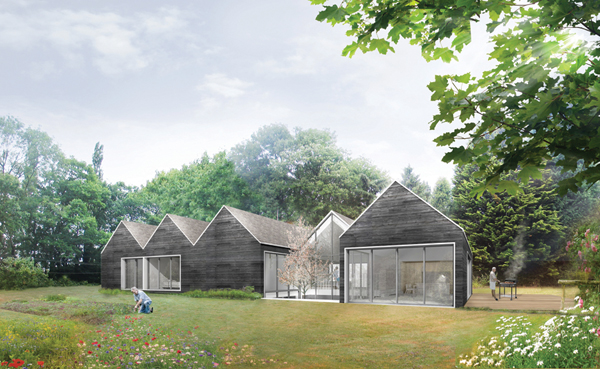 Tim Riley, Director of architects RCKa, discusses the hurdles his team had to overcome in order to gain planning permission for a Sussex home extension.

In late 2008 the Government fundamentally changed the rules governing what adaptations homeowners can to their properties without seeking planning permission. This adjustment to existing legislation - known as “permitted development” - was aimed at reducing the number of hoops through which property owners had to jump when making straightforward alterations and where these houses conformed to certain stereotypical arrangements: the Victorian terraced house; the 1930s suburban semi; the 1980s detached executive home.

For less conventional dwellings which do not fit neatly into these categories this has allowed architects to creatively interpret the regulations in order to unlock sites for development which had previously been refused planning permission.

In broad terms permitted development provides a series of geometric rules governing how a property can be enlarged without planning permission provided standard criteria are met. This “one size fits all” approach serves the majority of people very well, but in certain cases has led to unintended consequences.

In 2006, we were approached by a client who owned a modest single-storey wooden cottage in the centre of a half-acre plot of land deep within the West Sussex countryside.

The land had been in the family for several generations, with the house now standing on the site built by the current owner’s grandfather in the early 1930s.  Over the following decades the family’s connections with the cottage flourished, with the client’s mother being born there and years later being married in the gardens. As the family expanded it became apparent that this modest little cottage, which had played such an important role in the family’s history, was no longer suitable as a modern home. Rather than let the property slowly degrade over time the client and her family decided that they would like to invest in the site and commissioned us to design for them a beautiful new house which would make the most of this wonderful site and celebrate their long-standing connection with the area.

Given the obvious emotional and sentimental attachment to the property, we were asked by the family to develop proposals for a replacement house that would accommodate a growing family - now spanning three generations - whilst respecting the sensitive rural location as well as responding to the gradual changes that they had made over the years. In one example a flower bed, planted by the client’s father who since passed away, was a key element of external landscape which we were asked to retain.

Meanwhile, in the years that had passed since the house was first built, adjacent plots of land - many far smaller than the site of our scheme - had been sold and redeveloped to provide much larger homes. The modest little cottage was now dwarfed by larger houses on all sides.

For several months we worked closely with the client and her family to work up a design for a brand new home that was sustainable, accessible and welcoming, but which was also appropriate for contemporary family life.

And so early in 2009 we submitted a planning application for a striking new home on the site of the previous cottage. Although larger in size, the new house was carefully designed to minimise any visual impact on neighbours, concealing some accommodation below ground and using a slope on the site as well as rooms within the roof to ensure that the increase in size as seen from the street was negligible. The use of similar materials, details and form as the existing home helped to ensure the proposals remained sympathetic in scale and character to its surroundings.

Later that summer we received notice from the district council that our application had been refused. The apparent imposition of an arcane rule governing the allowable increase in footprint – not included within any planning policy but used by planning officers to determine acceptable dwelling sizes regardless of site area, context or need – meant that the proposal was determined to be too large despite the presence of far larger properties on adjacent, far smaller plots. Subsequent discussions with the planning department also proved fruitless and time-consuming.

With the opportunity for relocating her family to the site rapidly fading, we decided to investigate other opportunities for achieving at least some development on the site that would not involve endless discussions with a disorganised and disinterested planning department. Given the risks involved - and the limited likelihood for success – the idea of appealing against this decision to the planning inspectorate was dismissed. The prospect of severing the family’s attachment to the site was becoming an increasing prospect.

Returning to first principles, we decided to look again at how we might design a scheme that circumvented a dysfunctional planning system. Towards the end of 2008 the government introduced a comprehensive change to the permitted development regulations. Whilst aimed primarily at owners of conventional houses, the wording of the new regulations presented far greater opportunity for creative interpretation compared to the legislation that preceded it - whether this was intentional or not.

We soon realised that these changes provided the key to unlocking the site and achieving the generous family home our client desperately wished for, but would involve a fundamental redesign in order to deliver a high-quality home within the parameters of the permitted development rules.

The fundamental principle of permitted development is that this places restrictions on extensions to existing dwellings, whereas we had always assumed that we would be designing an entirely new home. The realisation that by retaining the cottage we could apply a different set of regulations presented us with a unique opportunity to achieve the client’s aims in the face of a resistant planning authority.

A close reading of the legislation revealed an anomaly in the definition of how the rules governing extensions are applied. It was clear that side and rear extensions to an existing property were restricted to four metres and extensions at the front of any house prohibited when facing the highway. But what if the front of the house did not face the road? In this case an extension could be unlimited in its depth provided it was no wider than the existing house. This was precisely the condition which applied to our site: a front door facing away from the road rather that towards it meant that we were able to expand the existing house back into the site almost without restriction.

With the parameters of the building defined we began developing a new design which borrowed the form and finishes of the existing house in a contemporary manner - stained ship-lap timber weatherboarding wrapped around a series of linear forms matching the existing house. With no restrictions on the construction of a basement we introduced a lower-ground floor level with a sunken courtyard providing daylight into the spaces below containing bedrooms and bathrooms, with open-plan living accommodation on the upper-ground floor providing direct access to the beautiful gardens that envelope the house.

Eaves and ridge lines match that of the original cottage whereas the internal floor level is terraced to follow the landscape leading to dramatic progression of spaces and a better connection with the basement level. Being of such a deep plan we investigated cutting holes from the permitted form to introduce courtyards which began to define the open-place space, orientate the building and introduce natural light into its depth.

The new home will be highly environmentally friendly – constructed from a cross-laminated timber structure with high levels of insulation, on-site power generation and rainwater recovery – and will provide the family with an attractive and sustainable home for generations to come.

It is endlessly frustrating that the planning system, which is specifically tasked with encouraging sustainable and responsible development, often seems to be doing the opposite. Instead of adopting an intelligence-led, bottom-up approach which responds to local needs and site-specific conditions it becomes necessary to rely on national legislation in order to achieve high-quality and sustainable architecture that responds positively to the changing nature of our society. Whilst the rules regarding permitted development were never intended to be exploited this way, this project shows that they can present an ideal challenge for motivated architects to unlock brownfield sites in order to deliver the high-quality homes that we so desperately need.

More in this category: « Curved in stone American dream »
Login to post comments
back to top