The great planning gamble: Buying a plot without planning permission 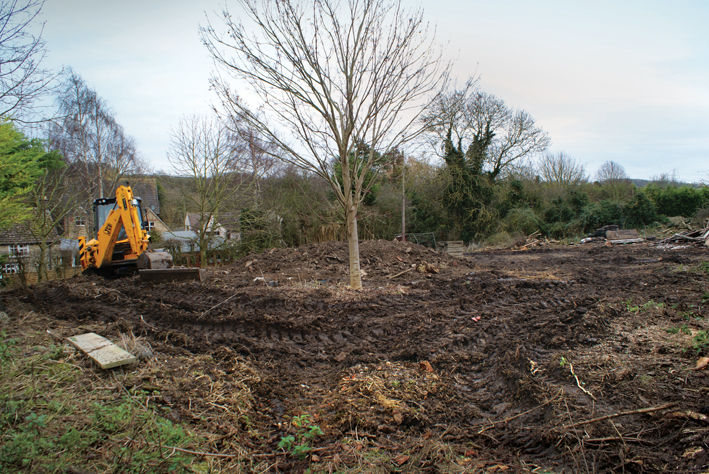 Self builders Ashley and Jayne Rolfe were not put off when 0.37 acre plot came on the market in rural Northamptonshire. The elevated plot, a derelict site, was formerly a landscaper’s yard with planning permission for storage and horticultural use. Situated on the edge of a village, it was considered to be outside the village boundary.

“We knew we were taking a risk but thought of it as a long term prospect and investment,” says Jayne. “Planning policy is changing and there is a housing shortage, so we gave ourselves a five year plan to get planning permission and build our dream home. Even though a couple of planning consultants advised us that our chances were very slim, we were not put off.”

Extensive research was made into the site’s history and it was discovered that it had been the orchard of the cottage next door. The village boundary had subsequently been drawn to exclude the site but it remained within the residential curtilege of the cottage and not in open countryside. Using the services of a local architect who was familiar with the local planning department and the area, an application for change of use to residential with detailed planning permission for a substantial family home was submitted in June 2011 and granted three months later.

The first challenge was to clear the site and to lower the level quite considerably. The wet weather during late 2011 and 2012 hindered the project but finally by August 2012, work had begun on the retaining stone wall and the foundations were complete. The following month the pre cast flooring system was installed.

The decision was made right from the beginning for stone and block construction, to be in keeping with materials in the area. Further inclement weather in early 2013 continued to delay the project as the builders, who are experienced in working with stone and lime mortar, were unable to lay when temperatures fell to below 4°C. The restrictive access to the site meant that only one delivery of stone could be made at any one time, which had to be dressed and laid before the next delivery. Stone supply was also delayed as the cold temperature prevented it from being quarried.

By the end of July 2013, the house was almost to roof plate. Internally, the block work walls had formed the rooms. The eco joists to the first floor were installed and the roof trusses, felt and battening in place by the end of August, in readiness for the slates.

“It has been a difficult project right from the start,” concludes Jayne. “When we began lowering the site, we found bedrock underneath. This all had to be dug out and removed from site. Fortunately, a local stone supplier cropped it for walling stone so we have been able to reuse it in the surrounding retaining walls. The site access has made it awkward to manage deliveries. So we’ve had to be one step ahead all the time anticipating what will be needed in the next couple of weeks so as not to incur further delays, but at the same time be mindful of our cash flow and that materials lying around on site don’t add value to the property.”

More in this category: « Plot purchasing checklist Government confirms support for self-build projects »
Login to post comments
back to top