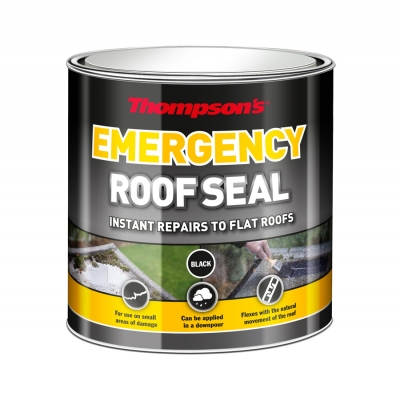 Following the wettest summer on record, Thompson’s has reported that demand for one of its products rose significantly during the season.

The leading weatherproofing brand saw sales of its iconic Emergency Roof Seal rise by 64 per cent, as homes around the country experienced a washout summer and the need for a quick-fix solution became paramount for many.

Thompson’s Emergency Roof Seal is one of the brand’s most popular products given its reputation for fast and effective results.

Used for small holes or cracks in flat roofs, Emergency Roof Seal will immediately fill or bridge gaps, even in heavy rain or under water. It flexes with the natural movement of the roof for a tough, long-lasting repair.

Marc Olding, Marketing Manager at Thompson’s said: “With a range of products that are designed to protect against the elements, we expect to see peaks and troughs throughout the year. Traditionally, sales of our Emergency Roof Seal spike much later in the year and around February/March time.

“The impact of this summer’s downpour has affected our sales so much however, that demand for Emergency Roof Seal has increased quite significantly compared to other years. It’s promising to see that tradesmen really do rely on our product in an emergency and choose it to guarantee an instant and effective repair.”

Tweet
Rate this item
(0 votes)
Published in Roofing
Tagged under

More in this category: « Sprout it from the rooftop Remmers Waterproofing Solutions Keep Guests Dry »
Login to post comments
back to top