The joy of bricks 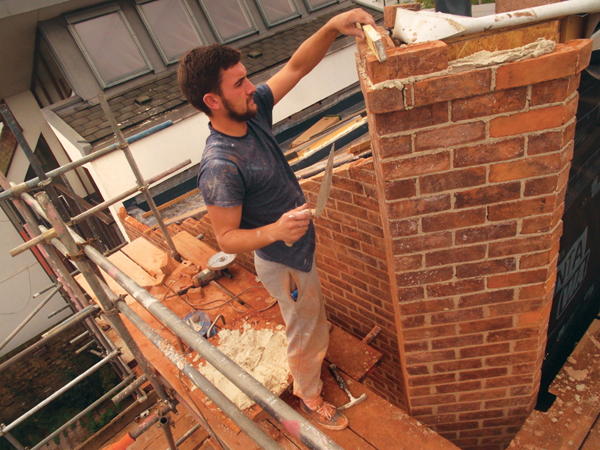 Every issue i-build follows Will Anderson as his self-build adventure unfolds. This month, a brick skin brings character to his soon-to-be home.

By the end of September our timber frame was up, our roof was on, and our windows and doors were in, yet the building still looked like a gigantic cardboard box. That’s the weirdness of timber frame construction – because the frame does all the structural work, the outer rainscreen can be added later.

Of course the final finish does much more than keep the rain off. It also transforms the character of the building. For our Arts and Crafts home, we wanted a traditional, beautiful and crafted material. So the choice was obvious: brick. But which brick? I found the answer to this question at one of the self-build shows where I met a couple of reps from Northcot Brickworks in Gloucestershire. They showed me their range of handmade bricks and I was immediately struck by the Silver Grey. This is a red-orange brick dusted with a fine grey sand, a delicate colour combination that I could see would look fabulous when applied at scale.

Northcot is a long-established brickworks that has been extracting clay from the same pit since 1925. Their Silver Grey bricks are made in the traditional way, formed by hand using a mould then fired in a coal-fired kiln. The different temperatures within the kiln add variations in colour to the variations in form created by the hand-moulding: subtle differences that add up to a characterful finish.

Our little site in south London was completely overwhelmed when the bricks arrived. We don’t have much room at the front of the site so as the packs came off the lorry we had to pile them high. It was all a little hairy until we had shifted a couple of thousand through the house to the back garden. Then we were ready for the brickies to start.

For good brickwork, you need good brickies. Although I had built a wall at the bottom of the garden, I knew that I needed experienced craftsman for the main event. Fortunately, the team I hired, from J&R Contractors, were up to the job and happy to use our slightly irregular handmade bricks. As the bricks were all a little oversized, they had to be careful to keep the joints tight and not to let the courses drift upwards. They also had to get used to using a completely new material: lime mortar.

I reckon lime mortar beats cement on just about every count. It takes a lot longer to go off but that’s an advantage on site. We bought big one tonne bags of wet lime mortar form Mike Wye & Associates, a lovely blue-white mortar that goes perfectly with our orange-red bricks. Although we mixed the mortar with a setting agent we could still leave the mixer full of mortar at the end of the day and get it going again the next morning, so there was no need for the daily grind of cleaning the mixer. Lime mortar always retains some flexibility, so a wall made with lime mortar is much less likely to crack than a wall made with cement. Plus, when the wall eventually gets taken down, the bricks can be reclaimed. In contrast, cement turns everything into a solid mass.

The brickies did a great job and coped well with all the tricky details of our design. I had made life particularly difficult for everyone by designing a tiled detail round all the windows. To build this, the brickies had to lay specially cut concrete blocks, set back from the face of the brickwork, which I then used as the base for the tiling. The result is certainly distinctive: our beautiful Northcot bricks set against blue-green porcelain tiles from Portugal. After six months of hard graft, our Arts and Crafts vision is finally beginning to emerge.

More in this category: « Fast forward Fun with first fix »
Login to post comments
back to top