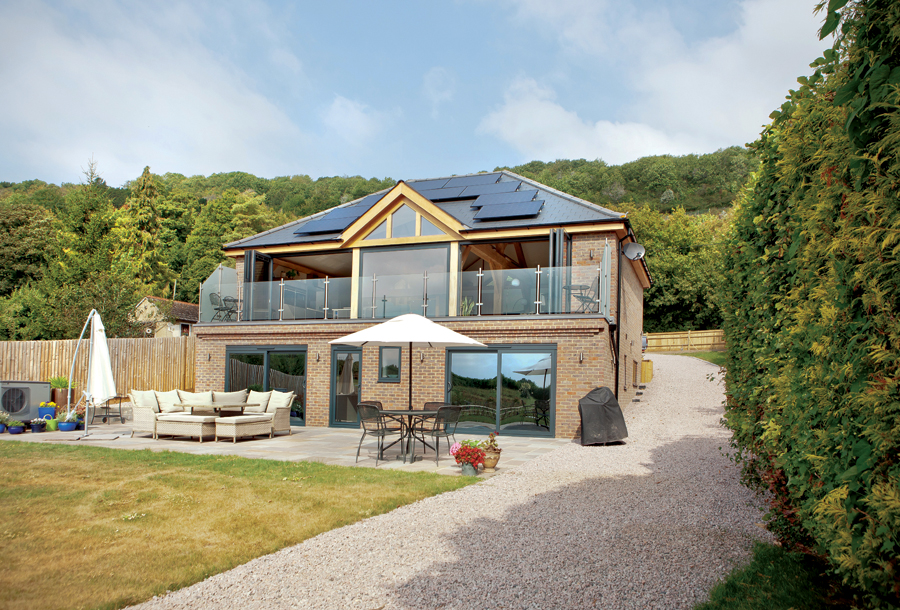 Overlooking splendid views, this Kent property named ‘The Shack’ is more than meets the eye.

For Gordon and Joyce Perrie, building their own home was only something they’d seriously consider if they found the right plot at an affordable price. Both keen walkers, they would very often stumble across beautiful plots. Gordon recalls: “I would frequently jest with Joyce, saying ‘Why can’t you find me a plot like that?’” Then one night Joyce announced that she had found the perfect plot in Trottiscliffe, offering half an acre of land.

“I was sceptical at first, as I didn’t think there was any way we could afford it, but Joyce assured me it was affordable. Before we knew it, we were on our way to the site to investigate,” comments Gordon. “The plot was only about four miles from where we were currently living. It transpired that the previous house had already been knocked down, but it had electricity and mains water supply. Access to the site was tricky, however the outstanding views certainly made up for it.” Returning from their first viewing, Gordon and Joyce both decided this was an opportunity too good to miss. They carried out some research and shortly after put an offer in to take it off the market. After a few weeks of legal actions, the couple had successfully secured the plot.

Fortunately, the plot already came with planning permission for a 2000ft2 detached house. Although, a second application was submitted after some design changes were instructed by the couple. It then took a further nine months to sort out all the details and some subsequent amendments.

Gordon comments: “Our vision was to have the reception rooms at the top of the house in order to benefit from the views and put the bedrooms and utility room underneath. The original planning permission design had the house as ‘conventional’. Having decided to locate the living/reception space on the top floor, we then explored the possibility of having the ceilings vaulted and with no internal walls. We also liked the idea of using a Green Oak frame to achieve this. Our vision also extended to one wall being built with the external facing bricks – we thought this would complement the glazing, ceramic floor tiles and oak timbers extremely well.”

Once the couple had appointed the oak frame specialist – who produced the initial frame – Gordon and Joyce went on to coordinate the oak frame design into the rest of the detailed drawings, which were produced by the architect. Gordon explains: “Initially, we appointed a firm of architects who had previously worked with the oak frame specialist that we had appointed to manufacture and erect the frame. However, after a few weeks, I was not confident with their commitment to the project and formally dismissed them. We then appointed an independent architect, who then provided all the drawings for the redesign of the house.”

Due to complex design of the house (built into a hill) and being situated on greenbelt land adjacent to an Area of Outstanding Natural Beauty, the couple enlisted the help of a number of specialists to successfully complete the project and comply with the planning regulations. Gordon continues: “We also appointed a local planning consultant to manage all the planning applications and amendments. Appointing a specialist took a lot of the stress out of this particular element of the works. This proved to be a successful strategy. We also used the services of a structural engineer for the base slab, retaining wall and structural steel frame that had to bear the weight of the glass above. We also had to engage a geotechnical engineer to test the ground conditions for load bearing and percolation values for the installation of the Klargester Treatment Tank.”

As anticipated, access to the site was one of the main challenges encountered throughout the build, as Gordon explains: “The access into the site was down a private road off the main Pilgrims Way lane. The access was narrow and steep. The first thing I had in mind when I saw the location was to shore up the road with a timber sleeper wall to take large HGVs and delivery vehicles. This was completed before any other works took place. The access into the site was always challenging. Some drivers took it in their stride, others did not fancy it.

“Another challenging aspect was making the house waterproof. The house itself is built into the hill and this involved the construction of a waterproof retaining wall around three sides. For this, we called upon Paul Tann Ltd. The architect advised we use a Stepoc Block system – a system of highly engineered, lightweight blocks that are built dry, filled with concrete and steel reinforcement bars to create walls with exceptional lateral strength – which was quick and structurally sound.

“Due to the weight of the glass on the south-facing upper floor, we had to install a 10.4m long ‘goal post’ type steel frame on the ground floor as support. We then buried this into the lower internal walls so it was not visible.”

Apart from the structural elements that were advised by the appointed specialists, the specification of the materials and products was entirely down to Gordon and Joyce, who were joint managing the project. Joyce notes: “The original planning permission was not too far off in terms of the bricks and roof tiles that we had envisaged. We did lots of research and had samples of the aluminium frames that would hold the bi-fold and patio units.

“We also took home samples of the oak floor, floor tiles, kitchen cabinet doors, bathroom units and stone worktops. We laid these out and made the choices which we thought went together, in terms of colour and contrast. We had the same approach with the final soft furnishings and lighting units. All the internal door frames and fittings are all the same throughout the house.”

The installation of renewable energy systems was an important element of the build. The couple researched the market extensively and eventually decided on an air source heat pump and PV panels. Gordon explains further: “We chose an air source heat pump, which supplies all the hot water throughout the house and is used for the underfloor heating. This was an ‘all-in’ package, supplied and installed by Nu-Heat. Both systems provide income from the RHI payments and tariff payments from the PV panels.”

To help conserve energy, the entire house is encased with high-quality insulation materials and high-performance windows. The house was airtight tested on completion and was found to achieve a score of 90 in terms of efficiency. The U-value was designed to 0.12 – this combined with the RHI and tariff payments makes the house very economical to run.

Thanks to the large amount of glazing, the interior space on the upper floor is light and airy, and the open-plan layout creates a feeling of space. The kitchen, furnishings and fittings are all contemporary, which are in perfect contrast to the oak frame construction. The lighting system is versatile with an option of white or coloured, or both, overhead. The large porch to the front elevation allows plenty of storage for coats, hats, boots and the like. The lower floor has a light and airy bedroom to the south elevation, whereas the rear bedrooms are darker due to the cut into the hill. The designers mitigated the darkness by installing an oak see-through staircase which lets the light through the risers to the north-facing side of the lower floor.

One of the best things about this property are the lovely vistas enjoyed from both levels. The views are complemented by a simple yet effective landscaping plan. A granite aggregate driveway takes you down past the property towards a turning area for cars. There is also a barn-style garage, which had to be applied for separately, as the original planning permission had restrictions on the outbuildings.

To level out the rear garden, Gordon used the excavations from the cut into the hill, and to further take some of the difference out of the levels, two sleeper walls have been built. At the rear of the property is a large patio area, laid with Indian Sandstone by Paul Tann Ltd. The patio features two sets of garden furniture and a barbeque area, which is perfect for entertaining. Meanwhile, at the front of the property, there is a spacious driveway with two flower beds. Raised flower beds, made from oak sleepers, are also featured alongside the bordering fence.

Gordon and Joyce allowed 12 months for the construction of the build, however it was completed well within schedule, taking just 11 months. The planning process had taken nine months prior to construction. This was purely due to a new planning application being submitted. There was also a change to the porch layout, which was down to the planner’s lateness in informing the couple that they had to have a toilet at main entry level. There was also an application for a barn-style garage and noise assessments for the air source heat pump, which delayed the installation of the plumbing system.

“As expected, we didn’t remain within the budget,” comments Gordon. “The cost of the insulating materials and the waste from this and other building products was a lot more than I had accounted for. The Green Oak frame was a fixed price, but then we decided to have the porch, barge, fascia boards and front windows all in Kiln Dried Oak, which added to the costs. “When we had put so much into the infrastructure of the building, we decided that the finishes would be of a higher spec than we first thought, so this also added to the overall costs. I’d say in total we overspent by 25%,” admits Gordon.

Spending more time and money on the specification and quality of materials has contributed greatly to the overall ‘wow’ factor of the property. “The rear elevations, expanse of glass, the oak frame styling, balcony, uninterrupted south-facing views and quietness have got to be our favourite elements of the home. We also like the blinds which are in the cavity of the glass units and the efficiency of the air source heat pump. We kept the name of the house, ‘The Shack’, which was changed from ‘Pleasant View’ in 1962.”

Gordon concludes: “My advice to anyone about to take on their own self-build would be to get really sound, reliable and trusted tradesmen from ground-works to the final finishes. Coordination of these trades is crucial to a timely completion. The interface between the plumbers and electricians is one to watch. My advice here is to have the same company or person to do both. Pay for professional help when you need it, do not try to do everything yourself. If you don’t have the background, get yourself a project manager (not the architect) and a good reliable builder. Try and fix the prices.”

More in this category: « A truly energy-efficient family home Sue Eakers on the design decisions behind her eco-friendly house »
Login to post comments
back to top