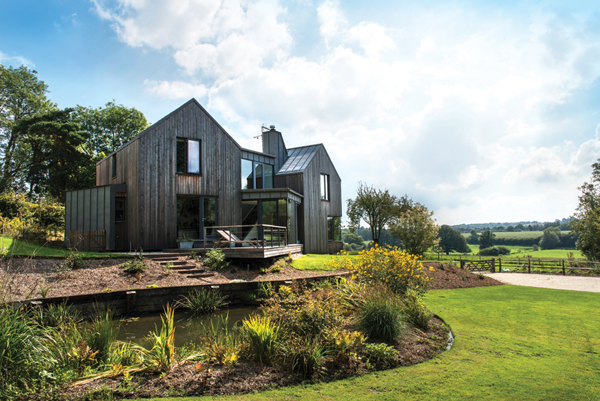 When architects Adam and Annelise Penton visited a plot for their development company they were so blown away by its natural perfection that it led them on an unexpected self-build journey.

Adam and Annelise Penton were keen to view a plot at the end of a lane in rural Kent, thinking it might be a potential project for their development company, Abodenova Ltd. The plot was home to a condemned cottage which had remained vacant for many years, was structurally unsound and liberally covered in vegetation externally, with black mould and mice internally.

“At the time that we found the property, we were looking for a house to buy, but had never considered moving to this area or even that self-building was a viable option given our budget. It was so far out of our sphere of thinking,” explains Annelise. However, as soon as the architect couple set eyes on the Groombridge plot it was love at first sight.

“I stood outside and just knew that this was the place we should be for the rest of our lives. A plot that is south facing with magnificent views, on a sloping site at the end of a lane within walking distance to pubs, post office, bakery and an excellent primary school – what more could you want! Plus, it’s every architect’s dream to design and build their own house!”

Most importantly, despite being in an Area of Outstanding Natural Beauty and greenbelt, there was planning permission on the site for a 3-4 bedroom house. Suddenly, what had not even been a dream was reality.

Once the purchase of the site was completed, Adam carried out a temporary refurbishment of the cottage for the young family to live in whilst saving money for the build. This also bought the architects time to thoroughly study the way that light and views influenced the plot, helping to develop the design.

Inspired by the vistas, slopes, woodland and aspect, the vision for the house was a low-maintenance, low running cost, low tech home maximising the natural beauty of the area, and responding to the site. The brief for their own home was relatively straightforward; to provide a four bedroom home within the restrictions of the planning, which specified a volume and maximum ridge height rather than a floor area.

It took approximately a year to gain planning approval from the Local Authority, once a bat and ecological survey had been carried out. As soon as the roof tiles were removed, Adam, Annelise and their two little boys moved into a twin-unit mobile home on the site, where they lived throughout the two years that it took for their new home to take shape.

As Adam and Annelise were physically building the house themselves, living on-site was ideal for the self-builders. The project became a second full-time job for them.

“The great thing about living on site was that Adam could work on the house during the day and I could look after the children, then after we put them to bed I would do a night shift on the build whilst he was down in the mobile,” continues Annelise. “Plus, the boys loved living in the mobile home. I had an 18 month old and a five year old and it worked really well for us.”

A carpenter assisted during the erection of the pre-fabricated timber-frame panels, which had been made by Adam before starting on site. Skilled tradesmen were called in as required for elements such as plumbing, plastering and zinc roofing, but most of the project was completed by the couple, from fitting the ventilation system to wiring the plug sockets.

When it came to product specification, owning their own architectural business – not to mention being married – meant that making material decisions came naturally. Annelise explains: “It’s amazing how quickly it all came together. We are used to helping clients make decisions, and know all too well how frustrating it is when they can’t make up their mind! Plus, we already had lots of contacts, which helped. We found that making a few key decisions allowed the rest to come naturally. For example, we knew we loved oak and that it doesn’t date, so we chose it for the floor. Then we wanted another wood for the worksurface and we knew we liked walnut and – as we didn’t want too many materials – used it for the staircase as well. It all just flowed from there.”.

The house has no boiler; the walls, floor and roof are insulated above Building Regulation levels and the house is predominately airtight. Heat is supplied by a log-burning stove which is centrally located and can be rotated to face different spaces. Hot water is provided by solar thermal panels on the roof, with electric immersion heater supplementing the winter months, run at night on low-rate electricity. There is a whole house ventilation system which incorporates a heat exchanger to pre-heat incoming air using the exhaust air. When the house was pressure tested at completion it exceeded its design requirements and was very close to being at Passive House levels. Underfloor heating is fitted throughout the ground floor, but the Pentons have never turned it on.

“We fitted underfloor heating because if we ever needed to sell the house in the future this would be a benefit. The wood-burning stove and natural sunlight are our only sources of heat. If it’s sunny outside then we don’t need to light a fire because our airtight home benefits from natural sun gain. We looked at ground source heat pumps and air source heat pumps, but realised that it was only useful if we were constantly inhabiting the building. If we went away for a week we would still need something to heat it up again, like a fire. With this in mind, it made sense to go for just the stove,” says Annelise.

Running the architectural practice and building in tandem meant that the project duration was longer than normal. However, it was completed in the period expected, taking approximately two years to construct and the house came in on budget.

The design has been composed to orientate the major spaces towards different directions. This has been done so that the family benefit from solar gain as well as superb long distance views, as well as having an outlook over the garden and woods beyond. The house is split into two smaller volumes based on traditional pitched-roof typologies, but detailed in a contemporary fashion. The northern wing sits on the site of the original cottage whilst the southern wing is twisted to face due south. This opens up a wedge-shaped space between, which forms the entrance and stair and a partially double-height dining space that projects out into the garden. The house is stepped down the sloping site and is clad in Siberian larch, which has weathered to a silver grey, thus ensuring the house sits quietly in its rural setting.

There is a definite colour scheme that reflects the outside as it is viewed through the full height glazing throughout the home. The focal colour is the green seen through the windows. Materials and colours fold neatly right through the building using warm greys, olive greens and white all alongside the oak flooring.

Commenting on the scheme, Annelise says: “Choosing colours was really difficult and I was very particular about what I wanted. When we moved in every single wall was painted white as we just needed to get in. All the artwork on our walls have memories attached to them, be it from trips abroad or a connection to our past. You don’t need to go to an expensive outlet to find what you want, it’s just a case of ploughing through and looking.”

The house has created considerable feedback from the local community and walkers, the majority of which is extremely positive. The only problem the Pentons now face is an issue with the acoustics in the dining room. “We had an acoustic engineer in to look at it and something about the angle of the walls that makes the room sound rattley. We have hung a rug on the wall as a piece of artwork and that really helps.”

“We do use our home as a showroom when we are talking to clients to get ideas across. So many people think they would never live in a modern house because it has no soul or character, but that’s just not the case. The house has worked very well, and we can honestly say that there is nothing we would have done differently. We would do the whole thing again, however we aren’t looking to move for some considerable time as the house and its location gives us everything we want."

The self-build’s interior makes a feature of the landscape via the glazing, and the exterior responds to and merges with the surrounding landscape. P C Henderson's sliding door hardware systems were specified for the central dining space and garage of the self-build. The larch cladding and zinc roofing helps the house to blend into the woodland beyond. All furniture within the garden is timber, as is the decking area, which have weathered to the same silver grey as the home’s exterior cladding.

The garden is conceived as a series of spaces providing different uses and different aspects. It has been landscaped to enhance the natural features, such as the stream which opens out into a large pond. It uses the natural fall across the plot to create a series of beautiful waterfalls into pools. The pool comes up to the corner of the decking which projects out on the west side of the house, affording views over the water, garden and to the woodland beyond.

The steeply sloping banks of the original site have been retained and planted to the side of the pond, and softened and planted down to the driveway. Timber sleepers form steps to enable easy access at key points down these banks. To the front of the house, there is a small area of driveway surrounded by flower and herbaceous beds. All of the driveway areas are surfaced in cockle shells.

“When forming a new garden one should look to create a variety of spaces, respond to the natural contours and features, be aware of the path of the sun to create shade areas at different times of the day, and have spaces where the garden can be enjoyed even during the winter months,” continues Annelise.

“Our garden is an ongoing project. We bite off lumps of it when we can without abandoning the children too much. The spring has been turned into a feature pond, which will eventually tumble across a rockery before falling off the sprout into the water. Because it is totally silent here, the spring feature creates a lovely relaxing sound for when sitting on the deck. To have a natural spring is phenomenal, but they can become a bit of a nuisance as others have sporadically appeared in the lawn!

“The house looks amazing because of the landscape. We love to just sit and look at it. I love that the angles of the house are all there for a purpose – the northern block had to sit directly over the cottage so it is dictated by geometry, the southern block is twisted due south and the middle captures the lights and views.

“My advice is that if you don’t have direct experience of building, employ good professionals to help you through the process because there are so many pitfalls for the unknowing.”