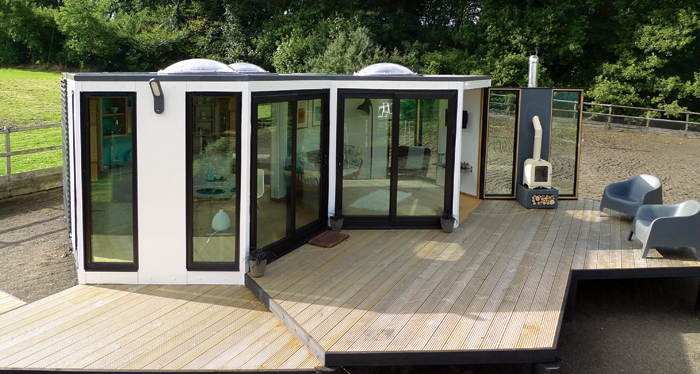 Honeycomb is an efficient hexagonal structure built by bees in which to live and work. This fascinating natural process was the inspiration behind Barry Jackson’s new modular living system, Hivehaus.

Designed to be compact but comfortable, Hivehaus is a modular housing system constructed from individual hexagonal cells that can be customised and connected. The idea was originally conceived by Barry as a highly versatile garden room that could be easily expanded to suit the needs of the individual without the need for planning permission, but the unique concept’s efficiency goes as far as challenging traditional attitudes towards home building, which begs the question, is modular the future?

“I wanted to create a living space reduced to the simplest form,” explains Barry. “The structure needed to be affordable, compact, energy efficient, but large enough to provide comfortable accommodation for any specific purpose. The space needed to be flexible to suit a multitude of personal requirements, but also expandable to adapt to changing circumstances. I wanted the structure to be built off-site using sized components to maintain quality, keep build costs low and minimise waste, but also needed the structure to remain bespoke to each user. Including extensive glass could make the most of natural daylight and solar heat, whilst maintaining high levels of insulation. I wanted the design to fit into surroundings, but with minimal impact onto the environment. Finally, I wanted the building to look stylish but not at the expense of functionality.”

With specific aims in place, Barry’s final design sought inspiration from three main influences. Honeycomb was the motivation behind the modular concept of this modern structure. Barry found guidance in Bauhaus design principles, which dictate that less is more and that form should follow function. This influenced the system’s look. Finally, construction functionality was inspired by the simple logic of children’s toy Lego, where a child’s versatile structure is formed using set sized components. Thus Hivehaus was formed – ‘Hive’ representing the beehive muse and ‘haus’ paying homage to Bauhaus design principles.

The main feature that sets Hivehaus apart from other prefabricated buildings on the market is its versatility. Hivehaus is created from identically proportioned hexagonal living cells that can be joined together in a variety of ways to form bespoke micro-homes. Each cell has six walls and provides 100ft² of space. When new cells are connected to the hive at least one wall section is removed to connect the new cell. This can then be re-used in the new room, lowering the cost of extension. More than one cell wall can be removed to form bigger rooms and the brand offers a plethora of optional extras – from hexagonal decks and removable slatted privacy screens to green roofs, solar panels and composting toilets.

The difference comes down to defining a hive’s purpose, which in itself becomes complicated as current definitions available just don’t work for this creative contemporary concept. “Hivehaus does not currently sit within any traditional definition,” explains Barry. “It is not a house nor is it a caravan. It could be classed as a temporary structure as it can be moved, but it does not have wheels nor is it meant to be confined to the traditional footprint. Hivehaus requires a different mindset. Why do we buy houses that are built to last 500 years if we are only going to live for 90? If we built houses that are designed to be affordable within our lifetime then we only need them to last that length.”

Barry’s design goes as far as offering a practical solution to issues surrounding the UK’s housing system. He continues: “At a time when the average age of first time buyers is on the rise, encouraging modular concepts could mean that the next generation will be able to join the property ladder as housing would become more affordable. I do honestly believe that Hivehaus could provide a serious alternative to traditional housing, but it would require major Government planning policy changes in order to allow more people to build their own homes. Homeowners themselves need a new mindset, rather than relying on major developers who are generally stuck in the past. As a nation we are obsessed with the property ladder and house prices, but if we take a simpler view and look at a home as an affordable shelter that will last our lifetime we don’t need to worry about buying a larger home when circumstances change – we could simply add cells.”

As Hivehaus is still in its infancy, there is currently no long-term test data for Hivehaus’ ability to withstand extreme weather conditions – an increasing concern for the UK as weather patterns become increasingly unpredictable. Barry continues: “We have gone to great lengths to source construction materials that are extremely robust and long-lasting. The risk of flooding is greatly reduced because the building is raised from the ground. We are currently working closely with a major university to provide thermal modeling to determine how Hivehaus will react under different climate conditions.”

Another brilliant thing about Hivehaus is that it doesn’t require foundations as each Hivehaus cell is supported via seven adjustable zinc-coated steel base jacks – useful for uneven terrain. The prefabricated building is also easy to assemble, where a single cell can be easily erected in one day by two or three men, and without the need for any heavy machinery or lifting equipment.

Hivehaus can be powered by mains electricity, but it is designed to allow alternative energy sources. Using an air source heat pump as the primary heat source can be complemented by a highly efficient wood burning stove for the colder months, and then can be reversed and used as air conditioning during the summer months.

Effective eco-credentials are integral to Barry’s original design aims. “We use many sustainable products within our construction, but not at the detriment of affordability,” he explains. “We firmly believe that sustainability is not just about using green products; it’s also about using less. We could build the most environmentally friendly building that ticks all the passive house boxes, but if it was so expensive that nobody bought it then it would be a waste.

“Smaller living spaces require fewer materials; they do not demand heavy machinery or the support of tons of concrete poured into the ground. Off-site construction allows waste to be kept to a minimum and flat-pack transportation means that more can be carried on one vehicle. Smaller living spaces also require less energy to heat, less effort to maintain, less furniture to furnish and cost less to purchase!”

Barry has shown that simplicity, efficiency and affordability may be the future of affordable housing. He believes that Hivehaus is suited to many different functions across the commercial sector as well as the domestic. From spa retreats and holiday homes to community housing and student accommodation, this really could be the bee’s knees of affordable housing.

More in this category: « No place like dome Double take: Couples build adjacent energy-efficient homes »
Login to post comments
back to top