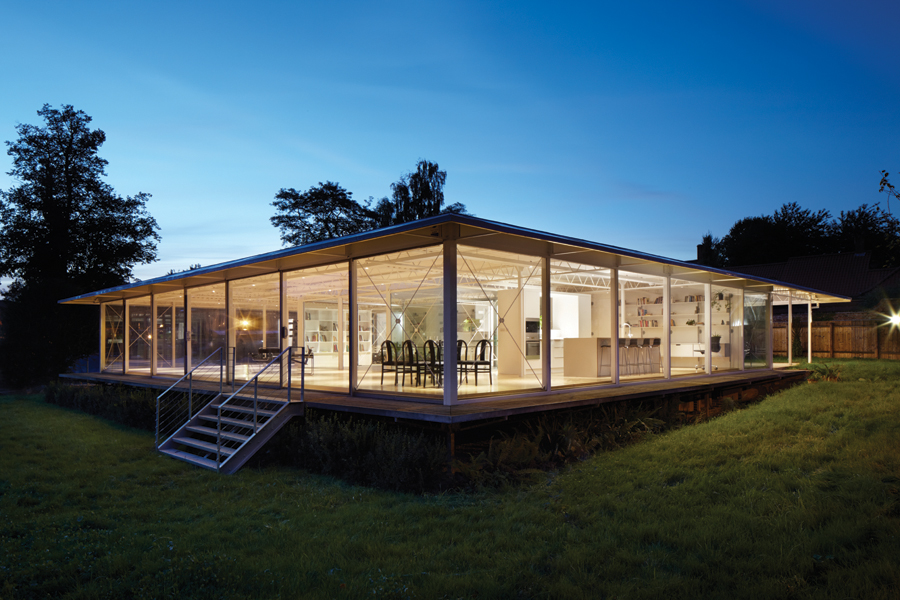 An impressive 1970s glass home in Suffolk has been brought to the 21st century.

In 1976 Michael and Patty Hopkins designed a unique home for Mr Tracey, an inventor, in Bury St Edmunds, Suffolk, shortly after completing their own home in Downshire Hill, Hampstead. Named after its inhabitant, the spectacular glass-framed Tracey House was completed in 1978.

When the property sold in 1981 several modifications were made, including enclosing the open courtyard and adding a master bedroom extension. There it remained unchanged until sold again in 2012 for approximately £700k via Modernhouse.com.

The new owners, an academic and a doctor, bought the building to be their sole dwelling, however the 34-year-old structure was in dire need of some dramatic TLC. The lightweight materials had suffered from rust and degradation, the underfloor and ceiling heating system no longer worked and the current electrics had been threaded through the building in a very haphazard manner. The couple faced the challenge of maintaining the integrity of the house while upgrading it to meet modern living standards.

They decided to invite architecture and interior studio Project Orange to develop a refurbishment strategy. Conceived as a light-weight steel and glass pavilion, perched in the landscape, it was a radical proposal. The original 300m² plan created a series of interconnecting rooms around an open courtyard, suggesting a collective and flexible way of living. The later addition of a roof over the courtyard created a water tight enclosure, however generated the problem of extra solar gain.

Project Orange’s Director, James Soane explains: "We began by looking at three possible strategies. The first was to restore the building to near enough its original layout, with one caveat – the clients were not prepared to loose the master bedroom extension. This would have created a largely open plan space, namely an open courtyard with two bedrooms.

"The second option was to create a new glazed link across the courtyard dividing it into two, allowing more autonomous rooms to either side.

James continues: "After reviewing these with our client we all agreed that the glass roof had to stay, because replacing it had huge cost implications. In the end we developed the ‘conversion’ concept. However we also felt we could take it one step further by reducing the size of the bedrooms and bathrooms to create a doughnut of living space with the conservatory at the centre. A library wall was built to separate the conservatory from the main living space while the kitchen and TV area are created from free standing joinery.”

Solar gain is now controlled via the old-fashioned method of grilles in the conservatory floor. These pull cool air through from under the house, which stands on stilts. There are also opening roof lights in the glass ceiling that are manually operated in order to activate the stack effect. This is also enhanced by the large exterior sliding doors.

James continues: “We made an assessment of the windows, an early form of sliding double glazed doors, and took the view that most of them were still in tact, but that what needed replacing were the rubber seals. The exterior canopy was suffering from corrosion, and we had to replace the brackets. All the metal work was painted white. Inside a myriad of electrical installations were removed and a simple run of downlights housed in a tray hung from the ceiling. The floors were all replaced with oak wood block flooring and a series of painted timber beams provides shade as well as visually blocking the interior view of the skylight.”

Although the structure might seem exposed, the site is not overlooked meaning that the inhabitants maintain privacy. The original building had metal louvre blinds for all of the windows, however only some have been replaced in the renovation.

Because all the elements of the project had been specified in advance there were few unexpected costs. However, there was an issue with sourcing new seals for the sliding double glazed doors, ending in the need for re-specification and the ensuing extra costs. After work begun the couple also decided to install an air source heat pump, increasing the overall project price. This addition pushed the project four weeks over the original timeframe, completing in April 2014.

James concludes: “The oak block flooring was a real triumph as it is cheap to buy and fairly easy to lay. It gives off an expensive mid-century vibe that really works. My favourite thing about the finished project is the quality of light because it is always changing.” This was not a straightforward restoration, but instead a reconfiguration that respects the original intentions of Tracey House – now given a new lease of life as Crystal Palace.

More in this category: « The graveyard shift Going back to her roots »
Login to post comments
back to top