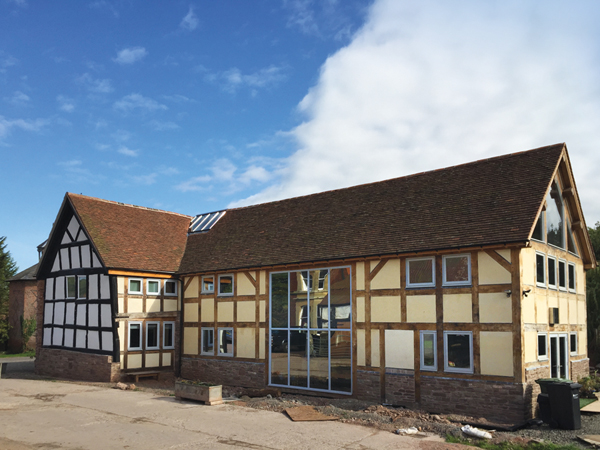 When a pair of dilapidated listed barns were presented to Kath and Marco Walker, they ignored their own lack of building experience and answered its cry to be restored to former glory.

Kath and Marco Walker were able to realise their ambitions of creating a dream home when they bought a pair of Grade II listed 17th and 18th century cow barns from their local farmer in Wellington, Herefordshire. The couple had big plans to create their own bespoke environment by renovating the barns themselves for their family residence.

“We never really had a plan to build our own house,” explains Marco. “But when we were offered the barn at a good price, my wife pushed it and asked for the second barn that was attached and before you knew it we were house developers! We just felt that the project chose us. It’s right by my work and right in the centre of the lovely village of Wellington.”

Channel Four’s hit TV programme Restoration Man were fascinated by the originality of the purchase and keen to be involved, lending their expertise and skills to create a family home for the couple. The resulting programme not only documented the transformation of the couple’s new home, but talked viewers through the architectural and design processes undergone during the restoration.

Both barns originally formed part of a farm and have been used over the years for keeping cattle and for drying grain. The 17th century cattle barn has an oak frame structure and the attached 18th century barn is made from brick, with a combined space of 3000ft2. The older of the two barns was in a drastic state of disrepair, or “mindbogglingly knackered,” as described by the Restoration Man himself, George Clarke. He went on to say: “You seem to have more gaps and fresh air than timber building – I’m surprised they are still standing.”.

George couldn’t believe that a Grade II listed building could fall into such a level of disrepair. In fact, it was so bad that the Walkers were allowed to take the 17th century barn down and build it again using as much of the original oak as possible.

Kath and Marco had never done anything like this before and had two young children to care for during the restoration process at the same time as project managing their build. The young family felt really out of their depth.

“The build was a massive challenge; we were both novices. We were helped through several challenging times by an architect and were lucky to have a lot of builder friends. For example, a friend in the glass trade helped us to fit the windows properly to keep the heat in,” Marco explains.

“We asked George to look over our original plans and to help us build a house we would love to live in. We explained how we lived and he changed our plans to suit us better. On the show he usually spends about half an hour with the developers, but he ended up studying and changing our plans for over three hours.”

The project suffered many problems including a run of bad weather and an influx of mud, but they were determined to make it work. With the advice of Restoration Man’s architect and presenter George Clarke and the rest of their team Kath and Marco set out on the challenge to create their unique home.

Kath and Marco had a very specific idea in mind about how the end result would look and feel. “A lot of the material specification was out of our control because the barns are listed. We recycled a lot of the old material, including roof tiles, stone and 30% of the oak. On top of that we went beyond the building regulations by using a thick layer of Kingspan insulation and high performance glazing,” continues Marco.

After discussions with the designers and architects on the Restoration Man team they opted to approach flooring experts Floored Genius about the new Microscreed finish. When Floored Genius first visited the development site in 2013 they found the floor in a very bad state; the ground was uneven, unsightly and severely cracked in several places; the ground would need a strong, sustainable surface covering to be secure and remain durable.

Microscreed, which can sometimes be referred to as ‘waxed concrete’ is a modern, water-based mineral material, which doesn’t use any harmful chemicals in its composition; it’s hypoallergenic and eco-friendly. The product is multi layered and trowelled, with an overall thickness of between 2-4mm. It won’t stain or tear and is less prone to cracking than a traditional polished concrete finish.

“We really wanted to create a home for ourselves that felt modern, clean and spacious, but that wouldn’t erase the original idea of the building – it’s such a unique space that we needed something complementary, homely and stylish at the same time,” continues Kath. “Plus, with a young family it was also extremely important that the flooring was not just safe and sustainable, but that we’d be able to manage the everyday wear and tear that family life can leave. In other words we needed a floor that would stand up to spills and scratches and would last long after the cameras had been switched off! With the aesthetic we had in mind we needed a surface that would allow us to keep the place looking as good as the day it was installed, without a great deal of extra work.”

A mixture of old and new

The restoration took a little longer than predicted, totalling a year and four months to complete, but only took the couple 5% over budget. The couple moved in only a few months ago and it is still a work in progress as the outside is yet to be transformed and one of the en-suites is still missing, however the structure itself makes a stunning impact. The bricks and oak frame truly pay homage to its heritage and the oak structure creates a wonderful contrast beside the interior white washed walls.

The new structure responds neatly with the original building by successfully mixing old with new. Exposed timbers, wattle and daub sit beside a modern kitchen and bathroom amidst the vast, open rooms. The open plan living downstairs is achieved on multi levels. A peninsular bar separates the kitchen and dining room and the living room is lowered by a single step to create defined areas within the open space.

“We love that you can be cooking at the same time as chatting with someone in the living area or dining room. So many of our friends have commented on how sociable the space is! It certainly is my favourite thing about our new home,” says Marco.

“After the TV show we received some very nice letters and a lot of people we have spoken to love it. Looking back, there are a few decorative elements that we would like to have done differently, for example we should have done the temporary staircase differently, but they are all superficial changes.

“There’s no way we would do it again. We felt out of our depth to begin with, so once is enough and once we were in, we did take a while to settle, but it really is everything that we hoped it would be. My advice to anyone looking to renovate is to get a good architect and builder and be on site every day – you’ll be surprised how much you will be needed.”

More in this category: « Controversial castle The graveyard shift »
Login to post comments
back to top