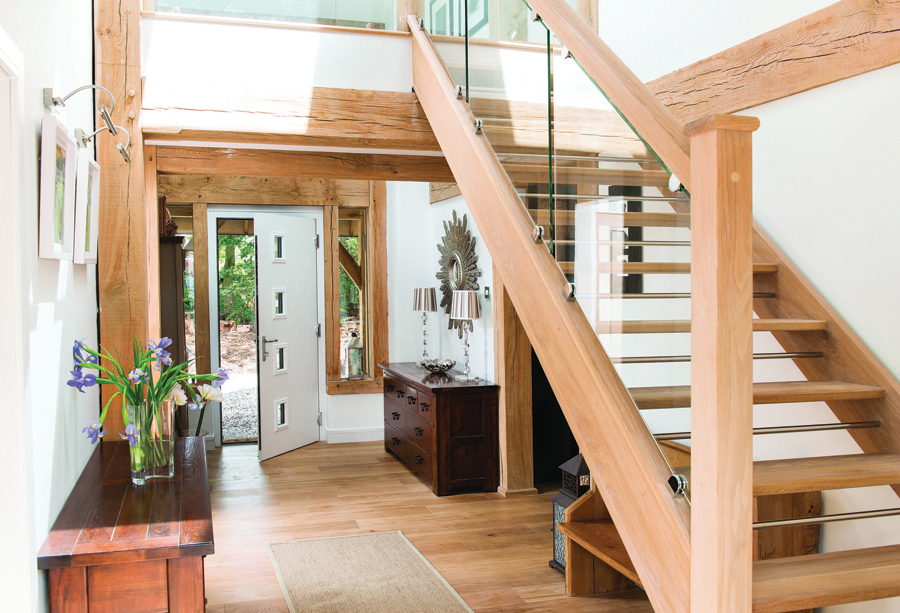 Staircases have gone through a massive transformation in the last 15 years. They have gone from being an aspect of the home that you are required to have, to becoming a real focal point of your home.

This transformation is no accident, but has instead been due to the massive influx of innovation in the staircase industry and introduction of a plethora of styles in the home, both old and new.

If you’re designing your new flight, you’ll want something that not only complements your hallway but is also able to stand on its own as a beautiful piece of architecture. Let’s take a look at a few ways that you could capture that ‘wow’ factor for your home.

A feature tread is the first tread or so of your staircase, as such it is potentially the first thing that you see and can therefore really set the tone for your hallway. A feature tread can extend beyond the width of the rest of the flight and as such can improve access as well as opening the staircase into the hallway, making it feel more inviting and welcoming.

Many self-builders mistakenly believe that you need to stick with the same wood throughout a flight. While this may have been the case in the past, this is no longer the golden rule. Of course, if you would like an all-Oak staircase then by all means you can, but have you looked into painting some elements of the flight a different colour? Not only does this look great, really working to emphasise the colour and grain of the American White Oak, but this would also save some money as the painted elements would only need to be a more economical Pine. Who said you can’t be both stylish and frugal?

Glass was once a balustrade option that was considered to only be suitable for the elite. No longer is this the case. Now more than ever glass has become a great value option to add a little character to your staircase. Both modern and yet understated, this is a fantastic choice if you are looking to bring your house into the modern era. If you are wanting to brighten a sunlight-­starved hall, this could also be the way to go, allowing the maximum throughput of light while not sacrificing safety. Generally you would have the choice of the glass either being clamped into place, alternatively the glass could be embedded into a recess in the handrail and baserail giving the impression of there being nothing there at all!

An open plan staircase needn’t just be for open plan homes. So many homes would benefit from the additional light afforded by an open plan staircase, with their sleek yet simple designs. While an open plan staircase will have a reduced riser, don't expect it to be gone altogether. UK Building Regulations state that you cannot have a gap larger than 100mm on your staircase and all stair companies have their preferred way of getting around this issue be that a chrome bar or a half­riser. However, be aware that an open staircase would typically be a little more expensive than the same staircase in a closed form, as they take a little longer to design and produce.

When the stair stringer is cut to follow the treads and riser to create a sort of saw­tooth effect, this is known as a cut string. This gorgeous angular effect was incredibly popular in the past, with no Victorian home being without one. So if you are looking to create that period effect then you should look no further than a cut string staircase.

There has, in recent years, been a concerted effort by the staircase industry to bring back the cut string style and re-imagine it for the modern era with some fantastic designs now available should you be looking for something a little different.

More in this category: « Stunning Belfast build wins Brick Award Flooring: No limitations with imitations »
Login to post comments
back to top