Perfect plot meets the needs of the whole family 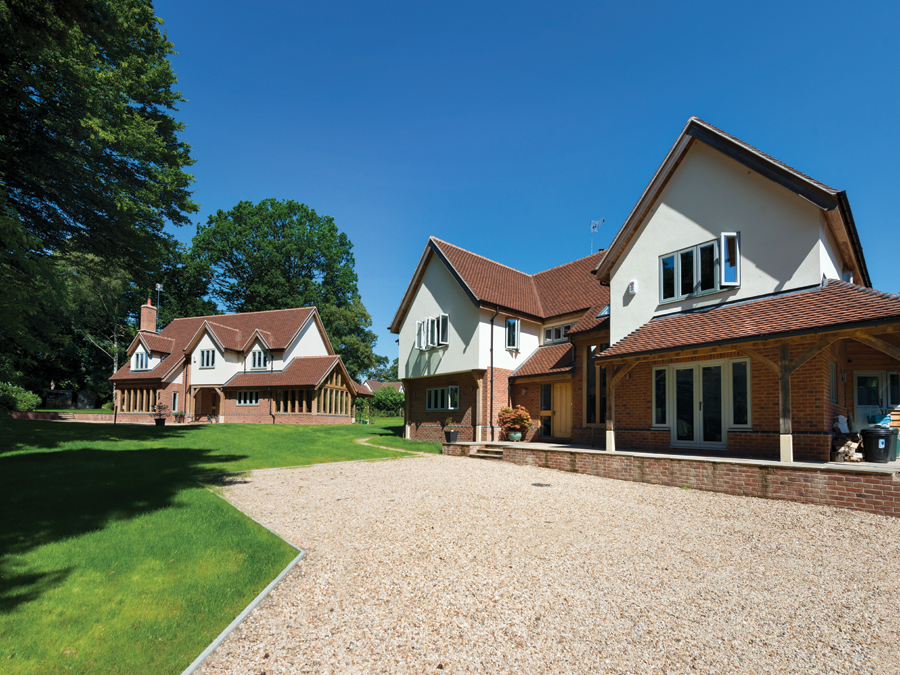 Although Etienne Patterson and his wife Katie had always harboured the ambition to build their own house, the trigger for doing so was his parents’ future.

"Mum and Dad wanted to downsize with more downstairs-focused living, but there wasn’t anything local enough for them to suit their needs," says Etienne.

The initial plan was to buy an existing house with sufficient grounds to build a house for the elder Pattersons, but then a dilapidated 1950s bungalow, set in a wildly overgrown acre of land, came up for sale just a mile and a half from where they lived in Woolton Hill, Hampshire. The site was ideal, with plenty of room for two homes, and an established site complete with trees and hedges. "I fell in love with it because I had a horror of just building a house in a field," Etienne recalls.

Set against 12 other bidders, ranging from self-builders like themselves to property developers, the Pattersons won the sealed bid auction in 2012 and set about the planning process, which took around 24 months. The issue was not the building plans nor even the tree preservation orders, but Section 106 of the Town and Country Planning Act 1990. This states that when a development results in a higher density of population, the developer must make a legal agreement to contribute to the local authority for the increased demands for services that will result. "I understand why it’s necessary for house-builders but for self-builders like us it is rather onerous," comments Etienne.

The Pattersons were well-armed with material for designing their dream homes, as Etienne and his wife had been to many exhibitions and collected clippings of the homes they admired. The results are two houses – a four-bedroom home for the Pattersons and their children and a three-bedroom home for the Pattersons' parents – that are a hybrid of two building methods, oak frame with timber frame encapsulation, with externally a combination of render, brick slips and weatherboarding. The impressive insulation overlaying a skeleton of oak offers a contemporary take on a traditional design.

The houses were designed by John Williams, who predominantly works with the oak frame manufacturer, Oakwrights. This was after the Pattersons had experimented with another off-the-shelf oak frame design company. “We realised that we wanted a more contemporary design with traditional carpentry methods, and John talked to us about what we hoped to achieve; including visiting our homes to see how we lived before he came back with the first drafts,” says Etienne, who then engaged Tim Potts at The Oak Frame Carpentry Company to build the frames. Potts impressed the Pattersons with his attention to detail and also his 3D design, as this meant the family could 'virtually' walk around the rooms before they were built and see how they would work in practice.

"Tim was exceptionally knowledgeable and was able to add enhancement that we hadn’t even thought about, such as the sling braces in our vaulted hall," says Etienne.

The actual construction was carried out by a recommended local builder, Calco, with the Pattersons acting as what Etienne describes as ‘an active client’. With hindsight, though, he thinks that there may have been benefits employing a project manager, as this might have avoided some delays, introducing and coordinating the builders with the oak framers and designers earlier and keeping a tighter rein on the timeline. "Looking back to when we were researching which oak frame manufacturer to go with, we visited a lot of homes and it would have been helpful to have taken the builders along so they had more of an idea of what we were planning," he says.

Etienne adopted four criteria in choosing components and materials: everything had to be cost-effective to install, run and maintain, as well as complementing the pastoral setting. For instance, both two-storey homes are equipped with 49 triple glazed Eurocell Modus casement windows and nine French doors, residential doors and stable doors, all finished in agate grey externally and white wood grain internally. It was important to Etienne that every element looks as if it is timber but with the unrestricted sightlines of metal and the best-in-class technical performance of PVC-U.

"Everything had to be cost-effective to run and maintain – I didn’t want to be climbing ladders to rub down or paint windows in 10 years’ time – and clearly energy costs have to be low," Etienne says.

He looked at many different door and window systems before selecting the Modus range, commenting: “This type of house is not intended to have PVC-U, but is meant to be fitted with external doors and windows made of more expensive materials, either all timber, composite or metal.” He added: “Given that we wanted to achieve efficiency both in energy and cost, Modus offered us both, particularly important was the fact Modus doesn’t have the clumsy welds that many PVC-U systems have and has the elegance and simplicity to fit in and enhance the design of the houses.”

The slim framed design of the Modus casement windows matched the overall aesthetic of the two houses and the opening windows are indistinguishable from the non-opening ones, so the appearance is uniform.

"The casement design means the window can have a floating mullion, so the first floor windows work like a patio door, all four bedrooms have units in a line arranged so that the left-hand or right-hand pair can be opened together to provide a massive escape route." For Etienne, an incident commander in the Fire and Rescue Service, this was an important point, he says: "It means the bedroom windows provide excellent means of escape, but they don’t look any different to the rest of the house."

Colour was another important consideration as Eurocell could supply all the doors and windows with an agate grey finish on the outside to complement the general ‘heritage’ look made fashionable by paint manufacturers such as Farrow & Ball – and back it with the company’s unique colour match guarantee – while the internal finish is white ash.

Energy efficiency and keeping down the bills were also important, though Etienne decided against going for the whole Passivhaus specification. The Modus doors and windows are crucial, as the triple glazed units installed by the Pattersons achieve a U-value as low as 0.7. Although the house “smashed the air tests”, according to Etienne, it is kept ventilated with fresh air at the ambient temperature through a RegaVent MVHR (mechanical ventilation and heat recovery) unit.

"I think every home should have one, we get fresh air but no draughts, and they’re very efficient," says Etienne, who also considered air source and ground source heat pumps to heat the home before opting for an oil-fired boiler from Grant. The heat pumps turned out to be impractical as the vegetation ruled out the ground source. Air source was "an upfront cost issue and uncertain future electricity cost", compared with oil’s significantly lower initial outlay at around 25% of it. That said, the system is to accept air source, because the boiler is outside.

The project did over-run its budget, as these things always do, but not by much. The plastering, for instance, took longer than scheduled. Other elements, such as groundworks, were kept to the budget by advance planning. The foundations were designed by a consultant, ensuring that they were designed to the right depth in the right areas according to the soil, rather than dictated by a building control officer from the local council.

The result is two homes designed especially for the people living in them and, after a year’s build, Etienne is adamant that this was the right course for him and for his family.

"I would do it all again. People come and ask what we would change if we were doing it again from scratch and the answer is nothing: we’re really happy at how it turned out."

More in this category: « New-build property benefits from made-to-order wooden windows and doors Self-build home meets the needs of an East Sussex family »
Login to post comments
back to top