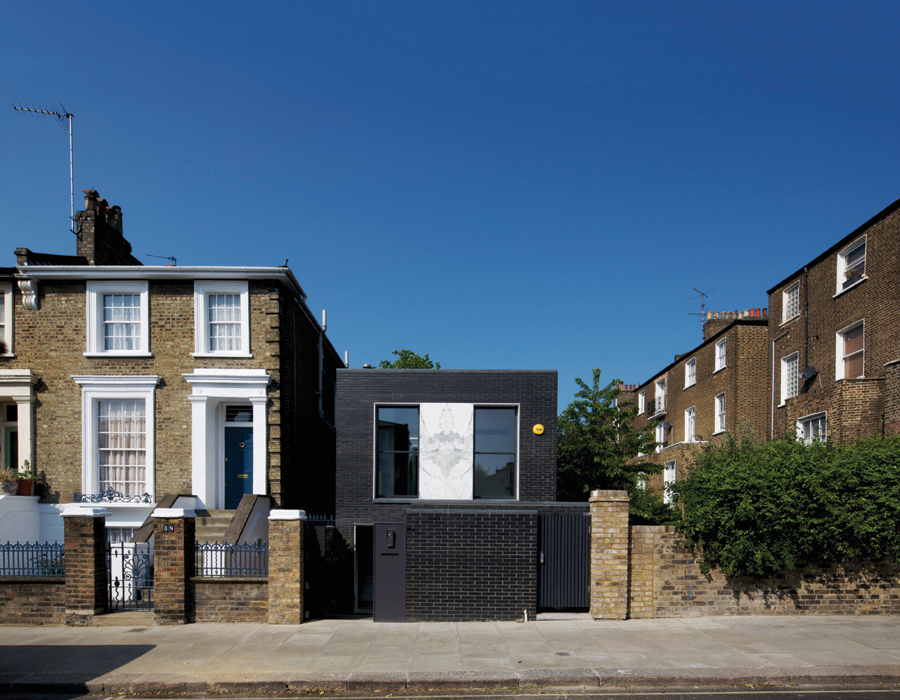 When architects David Liddicoat and Sophie Goldhill, the partners of Liddicoat & Goldhill, began market research for a separate private housing venture, little did they know they would discover the perfect plot for their own modest home.

It wasn’t the typical start to a self-build journey, as the couple explains: “We hadn’t planned to build our own home together, it was something that happened whilst we were working for other practices on high-end residential projects for private clients and complex urban social housing developments. We were keen to extend this experience into building more modest single houses.

“We took this idea and said, well actually let’s run with it, as we wanted to get onto the property ladder but couldn’t find anything that we both liked or could afford.”

As with all self-build projects, finding the site was not an easy ride, as David reveals: “We cycled around London, exploring the backstreets and peering over fences, looking for a forgotten scrap of land. We knew we could only afford a site that was too challenging for developers or ‘Grand Designs’ hopefuls.

“We had been looking for a project for about three months and then we finally came across this strip of land, a derelict gap at the end of a terrace in Camden. At only 390ft², it seemed almost impossibly small but in an excellent central location.”

Despite finding the perfect plot, the couple’s dream was still a long way off. David explains: “When we found the site, we carried out a quick search revealing that planning had been refused twice.

“The location is in the fiercely-protected Camden Square Conservation Area but we knew the project could only become a reality through our skills of designing in historic areas, and negotiating with neighbours and local planners. We soon snapped it up for just £75,000 with the belief that we would be able to create something quite spectacular and get the go-ahead from the planners.

“We initially put in an application for a very small three-story house with one level as a basement, and received planning permission on first attempt. However, we went back to the drawing board after realising that we could squeeze some extra square footage out of an adjacent site. We managed to secure some more land (part of someone’s back garden) for an extra £20,000.

“We then submitted a reapplication for a three-story house in London stock brick and another for cross-laminated timber. After discussing both applications with the planner, we decided to run with something a bit grittier and more industrial looking that was representative of the local aesthetic and heritage of the area. The coal-like brick facade eventually did it and we were granted planning-permission.”

Overall, the building’s design was dictated by the heritage and aesthetic of the local area and of course budget, as David explains: “Because our budget was so tight, we had always planned to carry out as much of the work as possible ourselves. The budget also limited our palette to primary materials.

“The tiny plot drove the design brief to a certain extent but in the four years we were doing the job, we were able to constantly rework every last little corner of the scheme. Rather than producing all of the drawings at the beginning and then building it, we were able to visit the site every day and work out how things needed to change and adapt them in order to improve the project.”

The couple’s vision for their new home was inspired by a set of architects in Japan – renowned for producing miniature urban homes. What’s more, David had always dreamt of building a generic small city house. The home’s location – located behind Kings Cross, Pancras – is steeped in sooty industrial heritage. It is where the railway cuttings used to be and previously home to a builders’ yard.

Working in quite a confined space, David and Sophie were keen to experiment with the space they had available. Sophie comments: “In order to give a sense of space to what could feel like very constrained rooms, it was important for us to modulate the sections and vary the ceiling heights.

“Getting as much light into the inner spaces was also key. By changing the floor level and building roofs at different heights, they created a range from 3mm in the living room to 2.1m in the entrance area. This allowed us to give each space its own sound quality and sense of cosiness or airiness.”

The couple were essentially the client, the architect, project manager and builder rolled into one, which was exhausting. Sophie remarks: “Our days involved 6 o’clock starts and manual onsite labour, while evenings were spent at home making any tweaks to the design.”

The end result is The Shadow House, built inside and out in slim-format Dutch engineering brick – a robust material with a dedicated brick glaze. Interior structure and window reveals are in raw larch, while polished concrete floors flow between each of the rooms.

“One small luxury that we allowed ourselves,” comments David, “was to buy two slabs of bookmatched Statuarietto marble, which we used throughout the house as a reflective contrast to the brick walls. The whole design revolves around this play of light and dark; carefully controlled moments of intensity and quiet shadow. We wanted to create interior spaces with maximum emotional effect.”

This desire is reflected in the bright first floor bathroom. It has a huge sheer glass ceiling (which needed to be craned into place) that contrasts with the intense atmosphere of the living spaces.

David continues: “We playfully carved space into the walls for everyday clutter; the TV and its cables are concealed behind a black glass wall, the toilet roll has its own marble niche and the washing machine is in a secret cupboard behind the toilet. Discreet storage fills every spare corner while the kitchen extract is buried into the brickwork.

“Because it was such a small house, it was really important for us to think about all of our possessions and where we were going to keep them. For example, by using the underneath of the bath area for storage, we’ve been able to reclaim the floor space for use. The bathroom is only 2.5 x 1.5m so for this reason we have used a Japanese bath, which is just over a metre squared.

With the support of the local community and a very hands-on approach, the couple have delivered an exceptional home that truly makes the most of available light and space. Sophie comments: “We learnt a great deal and even though the process is extremely time consuming and tiring, it’s very exciting. We’ve even committed to another self-build project, which is completing this Spring.

“Building your own home can be profitable financially, although everything you don’t put in in money terms you make up for in blood, sweat and tears. We definitely recommend the process of building your own home – a lot of tenacity and energy is required, but it is a truly satisfying experience.”

More in this category: « Derelict Victorian garden becomes unique single-storey self-build The untapped potential of a dated bungalow »
Login to post comments
back to top