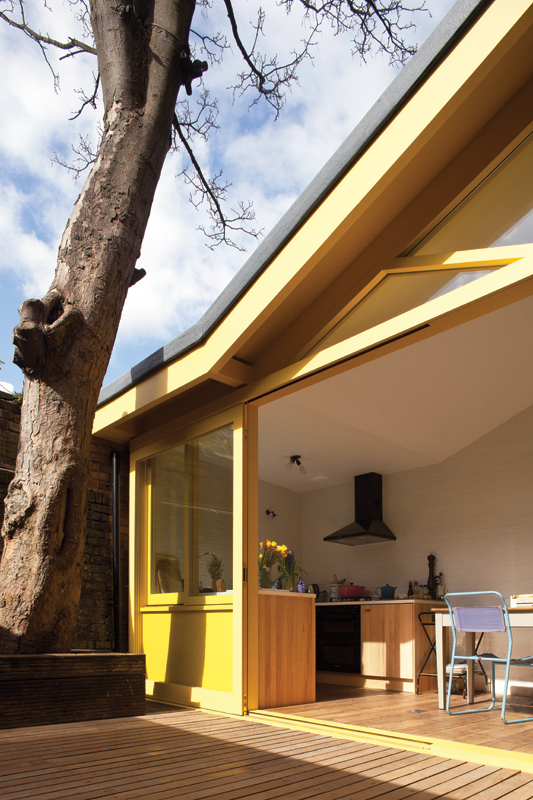 Two separate projects for artists who have endeavoured to incorporate studios into their homes demonstrate the successful partnership of living and working.

With modern lifestyles creating more opportunities and increased importance on the ability to work from home, many self-builders incorporate home office spaces within their new dream homes. However, if you’re an artist, you require a different kind of space in which to work – one which provides adequate light, volume and facilities. Where most people that work from home full time attempt to keep their work and life separated – for example by building a garden room/office – these projects looked further into life-work typologies to create a balanced marriage between living and working. Pricegore Architects are behind these two recently renovated properties that provide both living and working space for artists.

House for a Painter

After purchasing a south London warehouse as a place to live and work in, artist Monk approached Dingle Price – Director of Pricegore Architects – to transform the voluminous space into something spectacular. The main attractions of the space were the generous ceiling height and excellent natural light – both of which are essential to the large landscape paintings that he is noted for.

For several years Monk and his wife lived and worked in the building in an ad-hoc manner, but the imminent arrival of their first child created a need for a more formal distinction between the living and working parts of their home.

The solution was to take advantage of the existing mezzanine level to create a unique threshold that subdivides the warehouse into two approximately equal halves.

Dingle explains: “I proposed a design that made the residential half, in effect, to become a two-storey house which appears to sit within the industrial building. The front facade of this house overlooks and animates the studio space which attains the character of a small piazza or garden, a feeling further enhanced by the large landscape paintings in progress.”

The industrial layout provides a series of interconnected rooms of varied scale and proportion, which in turn draws on the classical heritage and symmetry of the building. Doors and shutters allow the residence to be either opened up or closed off from the studio space. The decor is suppressed to act much like a blank canvas and to heighten the spatial drama of the internalised landscape. A mix of white painted plaster alongside both painted and unpainted planks of southern yellow pine and pine floorboards serve to focus attention on Monk’s paintings. His work doesn't only inhabit the studio, but features throughout the home.

On entering the building, a compact lobby leads directly into the double height studio space, which is filled with numerous artworks in progress and their associated paraphernalia. North-facing skylights flood the room with natural sunlight. Paired shuttered windows puncture the wall that acts as a boundary between living and working and two symmetrically-placed doorways in each corner link the studio to the generous open plan living space.

The living space has a kitchen at one end and a staircase at the other, both formed from unfinished southern yellow pine. The staircase leads to a centralised landing that is lit by an original feature of the warehouse – a round window. Two bedrooms and a bathroom are located on the mezzanine level, each benefiting from skylights as well as the internal windows which provide views back down to the studio below.

Dingle continues: “A live-work typology is simply a single building/environment in which a person both lives and works. This house is an obvious example where the living and working are highly integrated, whereas Studio House has resulted in a more separate or stratified division, with the upper floors used as living space and the lower as a studio.”

This home in Dalston, east London, belongs to an artist and graphic designer who live on the upper floors, whilst using the lower floors as their studios. Having bought the property in a derelict state six years previously, they had renovated the living space themselves. They approached Pricegore to design a series of interventions to improve the natural light and external access of the studio, as well as convert the windowless basement into more studio space and to extend the property to incorporate a new kitchen.

The home now benefits from a yellow-framed kitchen extension into the back garden and a traditional glass and timber shop front. The project is conceived as a pair of complementary interventions each comprising a staircase, a glazed screen, and a tree. To the front, the screen forms the new shop front behind a brick tree pit and stair to the basement studio. To the rear, a glazed screen forms a facade for the kitchen extension and a concrete stair connects the two levels of the yard, where a large tree is retained in close proximity to the new building.

Undergrowth and derelict outbuildings were cleared from the rear garden to make room for the extension. The kitchen now looks through large glazing – framed by Meranti wood – onto the garden. This new space sits halfway between the ground floor and basement. Reclaimed materials have played a key part in the extension, including kitchen cabinetry made from reclaimed maple wood that once adorned the floor of a school gymnasium and planters created by bricks found on the site.

Dingle adds: “The yellow kitchen framework was an instinctive response to the surrounding tones of the brickwork, the dark blue-grey of the existing sash windows and the greens of the tree and future planting. Many reclaimed materials have been used, including external teak decking, cobble stones, reuse of bricks on site, internal pine floorboards, maple kitchen cabinets – reclaimed from a former school gymnasium – and light fittings throughout.”

Dingle worked on House for a Painter as Dingle Price Architects, before later partnering with Alex Gore to form Pricegore. The pair has worked on a number of projects that explore live-work typologies.

When asked what the most important considerations when creating a workplace within the home, Dingle stated that he believes the key components to be working alongside an architect to thoroughly understand the requirements of a space and to ensure there is good light quality throughout.

Tweet
Rate this item
(0 votes)
Published in Innovative Homes
Tagged under
More in this category: « RIBA Award-winning inspiration Thinking outside the box »
Login to post comments
back to top