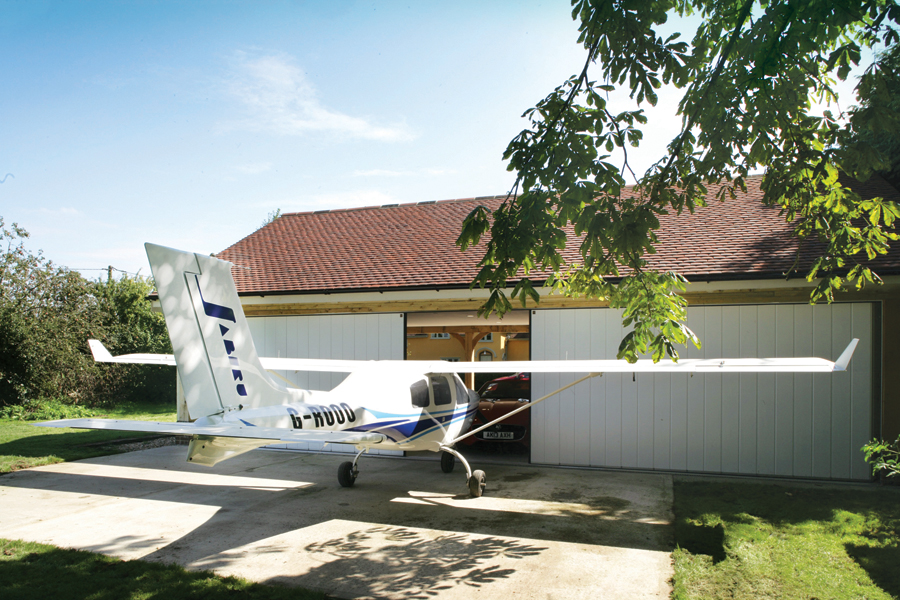 A commercial pilot for a well-known short-haul package holiday airline can now extend his flight time from the comfort of his own home, thanks to his own personal garden aircraft hanger.

Mr Henry Brewis of Bury St. Edmunds has been flying since he was 19, and as such, owns a private four-seater Jabiru aeroplane. After keeping his plane in a nearby airfield – some 20 minutes drive away – Henry decided it was time to invest in his own personal aircraft hangar.

The Brewis’ old listed farmhouse underwent a major renovation project 20 years ago. However, Henry had a vision of creating a structure wide enough to park his beloved plane in his own garden. In 2013 he finalised the plans alongside an architect to build the oak-framed garage.

Once planning permission had been granted, the structural ground works started in November 2013, but due to wet weather, the building completion was delayed until the spring. With specialist 6x2 lengths of Glulam - laminated timber comprising of strong bonded layers - and locally sourced 9in2 beams of oak to support the roof structure, it took just six weeks to build above ground level from start to finish.

When Henry began the specification process, he searched locally and sourced quotes from commercial door companies; however, he decided they were far too heavy and expensive for domestic use. With a brief for an affordable, attractive garage door to fit a 12m wide opening, he approached a couple of specialists with his unusual request, but unfortunately they could not offer any help or guidance.

After a recommendation from a friend, he was introduced to Andy Simmonds at Fore-Most Garage Doors in Ipswich, who was very positive about the proposed challenge. This was on the proviso that he could source the relevant products from Hörmann and seek advice from the manufacturer’s domestic engineer and UK resident expert, Alex McKay.

In keeping with the Brewis’ Tudor oak-framed property and cart lodge, the conclusion came to fitting a combination of two double automated HST side-sliding sectional doors, something akin to a James Bond lair, much to the appreciation of Henry, Andy and Hörmann’s central area sales manager and former service engineer, Luke Freeman.

Henry now houses his pride and joy in a purpose-built 105m² cart lodge. As well as the light aircraft, the cart lodge is also home to plenty of overhead storage and his family’s four cars, which all fit neatly under the Jabiru’s 8.12m wing span. The clean white finish of the garage doors matches the Jabiru perfectly and if Henry decides to upgrade to a six-seater aircraft, he can easily do so, as the current width and height of the doors were specified to allow this future eventuality.

For Andy, working with Henry’s architect and builder was key to ensuring the construction was completely level, in order to safeguard an accurate installation. As with any garage door fitting, it is of the upmost importance for the door openings and side walls to be correctly aligned for smooth operation, and for the relevant clearances to be left in the reveals to enable the door to function properly. Since the proposed sectional side-sliding doors needed to be so significant in size, the boom tolerance, lintel strength and load-bearing weight had to be factored in so that the space could provide ample support.

Henry agrees that a team effort is required for a successful build. “By using the necessary skills and inside knowledge of a door specialist from the outset, we knew the exact specifications required to undertake such a project,” he comments.

“The new structure sits really well beside our house. Many of the villagers have commented on it looking good due to the oak frames being in-keeping with our Grade II listed Tudor property.

“For practicality purposes I would say the electric doors are my favourite aspect of the new structure as they offer such immediacy and ease of use when I want to fly my plane. The doors work incredibly well; they are exactly as I expected, so I am very pleased with the end result.

“This has inspired me to do another project soon, but it is a little way off in the future. This project has certainly given me the knowledge and confidence to find new self-build projects.

“I would advise anyone looking to build their own garden structure to plan ahead as much as possible and to order materials in plenty of time.”

With the oak cart lodge costing around £50,000, and the garage doors at £10,000, the Brewis family have not only added considerable value to their home, but more importantly, they can now enjoy the freedom of sharing more time as a family, doing what they love, without being tied to the inconvenience and distance of an airfield.

Renting the field next door from a local farmer has meant that Henry, his wife Hayley and two daughters can fly from home at short notice, virtually taking off from their back garden, which has been a blessing when travelling the 200 miles to Somerset in 1.5 hours to make the most of their Summer holidays.

More in this category: « Dig for victory Building your own garden room »
Login to post comments
back to top