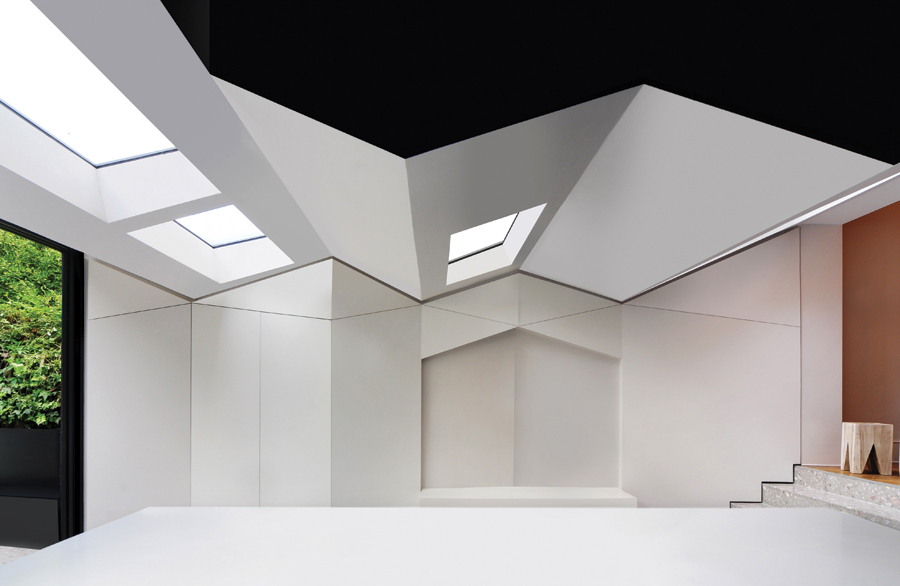 A three-storey period terrace house in North London has been transformed thanks to an extension with a striking pleated roof.

The North London property’s rear benefits from stunning views of the adjoining Parkland Walk conservation area – a linear park, formerly a railway line which runs from Finsbury Park to Muswell Hill. Keen to make the most of this rare piece of nature in suburbia, the homeowners approached architecture studio Bureau de Change to come up with an extension design that would open their house up onto the surrounding woodland.

Bureau de Change’s founding architects Katerina Dionysopoulou and Billy Mavropoulos have created a concept that opens the property onto the garden whilst creating the sense of volume inside thanks to an innovative ceiling design.

The extension sits four steps below the property to align with the sunken garden. The focal point of the project is a pleated roof at the back of the house, which appears to be formed from a flat surface and is forced to crinkle up into a faceted structure as it is pushed up against the exterior wall. From the garden, the pleats are purposefully sunk from view, creating the impression of a simple flat roof, allowing the character of the original building to stand out.

Katerina comments: “With the pleated roof we wanted to not only bring a graphic feel to the modern extension, but also to create a feeling of motion which would emphasise the meeting of old and new. The poise of the roof offers natural points for the placement of generous skylights, which satisfy the owners’ desire to see the nearby woodland whilst relaxing in the space. The openings also bring light into the living area, which would otherwise be shrouded by its position in the centre of the house.”

The project took a total of seven months. The original building fabric at ground level has been removed and replaced by the new pleated extension which ‘props up’ the remainder of the house. Eliminating any visible columns was technically challenging, but essential to maintaining uninterrupted views of the garden.

Forming a side and rear extension, the roof expands the existing kitchen and creates a new dining and work area. The roof pleats are replicated along the party wall, concealing a home office which can be opened up when required. The boundary of the kitchen is marked assertively by the end of the pleated ceiling, which is capped by a midnight blue surface that emphasises its ample peaks and troughs. Darkened surfaces continue through the kitchen into a long passage that extends along the left side of the property, conveniently and discreetly creating a storage and utilities ‘zone’.

Commenting on the design, Billy adds: “Materials and colours were carefully proportioned and distributed to visually mark the transitions between living spaces and to create a natural circulation.”

The scheme is characterised by a rich palette of colours, materials and textures, which create a different experience in each space. The bold pleats are softed by three cylindrical lights which suspend over the central kitchen worktop. The kitchen itself boasts a minimalist design, with sharp edges and a single, tall curved sink tap. The walls are painted a crisp white – a striking contrast to the midnight blue walls that edge the ceiling and kitchen cabinets.

Large terrazzo slabs are a gentle relief from the clinical palette. The flooring works its way up steps to meet with encaustic tiles when entering the original hallway and tonal parquet flooring in a herringbone pattern in the living room. The use of contrasting flooring complements the complexion of the original building, whilst enhancing the graphic impact of the angular extension.

Katerina says: “We are very happy with the end result, as is the homeowner. The extension has become a relaxing and functional space for the family. The rich combination of materials has worked very successfully – creating the changes in atmosphere throughout the house that we were aiming for, whilst maintaining a feeling of cohesion in their distribution.”

More in this category: « Take your heating into the trenches How to create a personalised interior design »
Login to post comments
back to top